A Potpourri of Space-age Objects

First on display is an electronic metronome, possibly from the 1980s. Besides the beat per minute dial, the wheel also shows corresponding musical terms such as Andante, Moderato, Allegro and so on. Powered with a single 9V battery, the metronome can be made quiet and the sound can be output from a phone jack to a mixer or headphones. 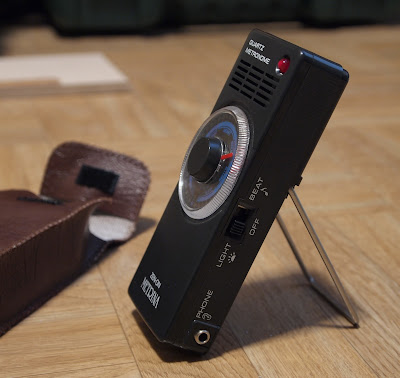 The A4 position also gives a 440hz tone for tuning instruments, which is pretty handy. The tempo range is from 40BPM to 208BPM. I have not tested if the device is accurate. 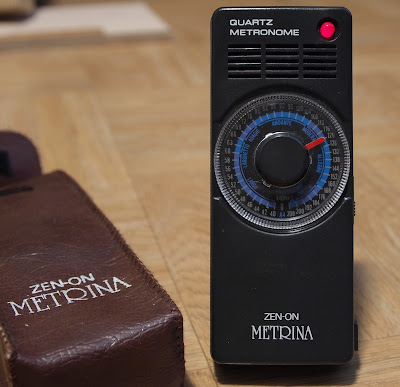 Next up is Gillette Techmatic safety razor, a design from late 1960s, this model likely from the 1970s. A razor like this (but not exactly like this) was taken on some of the Apollo flights. Not that it's cutting edge, as it is very gimmicky. Instead of a replaceable single blade, the blade is actually a band which can be cycled onwards with a lever. Turning the lever revealed some unused blade, so I actually tried out the razor. It's pretty horrible, but it did cut the face hair. I had to finish with a modern blade, though.

I think the device can be called innovative, and it certainly looks more interesting than any current cheap razor. But it can be easily argued that the strange blade is just a trick to sell a novelty, and the unnecessary bits and pieces appeal to the tech-hungry male.
Safety razors are pretty crappy products overall. Try to buy a handle and replaceable blades and you'll find out the company will eventually change the connector so that you have to buy a new handle anyway after a few years.
Sanyo Data Recorder

Ok, I'm scraping the bottom of the barrel here. A Sanyo "data" recorder. In addition to a normal tape recorder, this has Attenuator, Phase and Monitor switches. The attenuator boosts the signal, which is pretty good for square waves I guess. I'm not sure about the phase reversing, perhaps it inverts the waveform. Don't know what's the use for that. Monitor turns the speaker on and off. It's not the most beautiful tape deck there is, but I kind of appreciate the humble no-nonsense design and the tiny triangular buttons for the "extra" functions.

Posted by Tero Heikkinen at 17:51 No comments: