After the excellent Saboteur remake for web browsers, Clive Townsend, the author of the Saboteur games, has released a similar treatment of Saboteur II - The Avenging Angel.

I waited for this release with mixed feelings. On 8-bit computers, Saboteur II from 1987 felt less good than the original. Slow, giant-size map with repeating rooms, difficult and random fighting. This type of opinion was also echoed around the 'net, so I never really found myself back with the the game.

Even then, I also felt that on certain points, the sequel was an improvement over the first Saboteur game. You can select your own entrance by dropping from the glider, and you can sneak a bit around the building and not only inside it. The jumping is much more fluid and there are no frustrating jump sections. The ninja can do a satisfying somersault which has more subtle uses than in the first game.


With the Saboteur 1 update, Clive had done an excellent job of enhancing the outcome without altering the game play inside the original game area. Here I was worried that the second game could not work without fundamental changes.

Now that the game is faster and there is more to see, I'm happy to say Saboteur II becomes much clearer and better without any real alterations to the game core. For example, now I finally see that the different missions encourage taking different routes within the complex, whereas Saboteur I was bounded to the one back-and-forth journey with variations.

There's more visual detail, locations and "intel" points and achievements where you learn about the background of the complex. Another nice added detail is the enemy energy bar, which is also shown alongside the player energy. Although it confused me a little at first, this makes the fighting rules more clear and a bit easier.

The missions and some game play aspects have been tweaked a bit. I see the items are no longer placed in "stashes" of multiple items, and the code locations don't have items in them. This is a reasonable streamlining as there was no real benefit from the stash system. A tiny difference is that the missions are now properly locked away, and you can't use a code from a magazine to unlock them :)

As with the previous remake, there are also added game screens and plot elements, which are here revealed in a more piecemeal fashion. After completing a few missions you'll discover there are doors that lead to new rooms... and yes, there's also a new section after all the effort and that's all I'm going to say for now. Let's just say I like the way the new narrative unfolds. Just take heed of all the intel and achievement notes and you'll get an idea what you might be missing. Also, the background in the loading screen is a map, too.

But it is a bit difficult at the very beginning! I died a dozen times in the first few screens when I started out, but after this initial frustration I took a deep breath and looked at what was wrong with my play style.

For absolute beginners I'd recommend avoiding the androids, running away from them, or finding routes where you don't have to engage them. This way you can get a better feel of your way in, out and around the complex.

Eventually you have to learn to fight, ninja-style. Nina can do more fighting moves than her brother, but I'd suggest using the flying kick (run + fire) as the primary form of combat, as you can at the same time distance yourself from the androids and keep on fighting. A flying kick followed with a punch can be a devastating combo, but you need to get the rhythm of the fight correct. The crouching kicks are good for the pumas.

The thrown items are as good as one kick, which can make the difference between life and death in some places. Ideally, throwing an item followed with flying kick+punch will destroy an android extremely fast. Got to appreciate the new splintering effect when throwing stuff at the androids!

Situations where two androids are close up can be dangerous. At places, you need to clear yourselves "home space" before climbing up or down a level, because you can't rest while on the ladders between two floors.

As in the original Saboteur 2, there are also some "silly" points where you can rest. These are spots the androids won't enter, despite what logic might say. Take note of such places.

To me this release is just as good or better as the Saboteur! remake, but for slightly different reasons. I appreciate the way the game is able to enhance and finalize Saboteur II: The Avenging Angel in a way that makes me say this is the game it ought to have been, or always was in its heart. The added material, different graphic modes, various music tracks and other improvements here and there make it so much more. I can only hope Saboteur III will be made, combining the best elements from both games.

Get the game(s) from here

My thoughts on the Saboteur! remake here 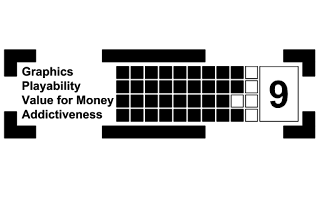