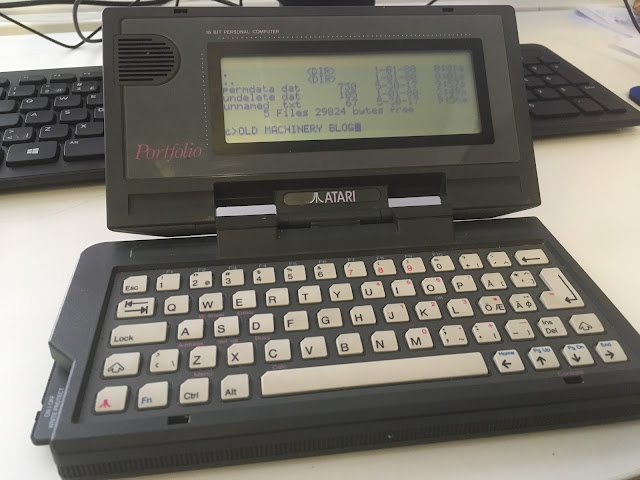 Atari Portfolio is from a time when Atari was beginning an expansion towards new fields (transputer computers, CD-ROM drives, STacy, 32-bit consoles and other near-vapourware), innovating with this portable "MS-DOS compatible" hand-held computer. Luggables had been seen before, laptops were nearing acceptable sizes and Sinclair's Z88 packed some nice functionality. But here was something, that for a brief period of time, seemed like the future.
The physical design is neat, a bit confused around the hinge when it's open and a bit thick when closed, but very cool styling altogether, a bit cyberpunk even. A slightly smaller footprint than I expected, a bit thicker than I expected, a bit smaller screen than I expected. Atari compares the size to a VHS-tape (a size comparison that's bound to become extinct) and that's a pretty adequate description. 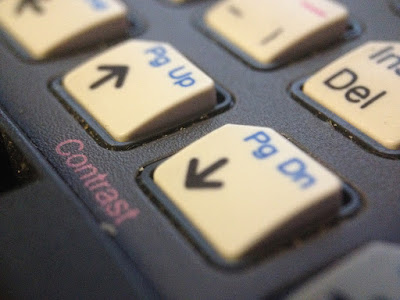 The hinge gave a fright-inducing squeak when opening and the lid refused to close fully. Perhaps I broke the guard switch, or it was broken to begin with. On the positive side the hinge has not become loose at all over the years.

Silliest thing is the area around the screen which has no other purpose than to declare "16 bit personal computer", "Portfolio" and ATARI at various places. I can imagine that in concept stage the screen might have filled a bit more of the lid space.

The keyboard is good for the size. The keyboard is buried, the keys are profiled to slant forward and they have that characteristic 45-degree sci-fi cut in them. These features altogether improve the typing sensitivity a bit, further enhanced by the subtle electric beeper sound. No fast typing, though, I was using maybe six fingers tops. I needed to change the keyboard layout to Swedish, this from the Applications/Set up/Keyboard.


The apps are quite well thought out. The Address book does not make too many assumptions and the editor is low-key enough to be relatively quick. The Diary I suppose is more of a calendar, but I did not look into it too much. The calculator I found to be clear but a bit limited, no hex mode or even SIN/COS as far as I could learn from the manual.

The spreadsheet can calculate more complex things, and I suppose the calculator is more of an afterthought for simple immediate calculations. No hex though in the spreadsheet and sadly no string manipulation either.

I was a bit horrified with the DOS-style frame window space waster in these apps. Thankfully this can be switched on/off with F5.

The Portfolio boots up to a stripped-down MS-DOS called DIP DOS, with a plethora of familiar commands such as DIR, CD, COPY, PATH, PROMPT etc. HELP brings a shortlist of generic commands. Batch files such as AUTOEXEC.BAT are valid too. Thankfully the OS is in ROM.

The display shows eight text lines, and the active part of the display is even slightly smaller than the physical dimensions which are small to begin with. Old MS-DOS programs should in principle work with the Portfolio, but I doubt there are many that accommodate with the 40 x 8 character display and the limited 128K memory. Part of that memory is a RAM disk, too.

It's possible to use a virtual 80x25 mode, and then scroll around that space, using the viewport as a window into that larger screenspace. The internal apps don't respond to this, but maybe it's wiser that way. In my understanding the screen is strictly text-mode, so no plotting of graphs or sprite graphics.

Given this is an MS-DOS environment, some omissions are a bit frustrating. I can't use EDIT to run the internal text editor, for example. There's a clunky APP /e construct, and although I can create an EDIT.BAT that runs the command, APP does not take a filename as an argument. At least the applications remember the last open file.

It's a pity the RAM cards need their own battery. It's also suggested the battery be changed every six months. The battery type is CR2016 type and should be only replaced when the card is inside a powered-up Portfolio, in case you're interested in retaining your data. I didn't try my 128K card yet as I don't have the battery. When the 4 AA batteries inside the Portfolio die, I guess it's goodbye to the internal RAMdisk files if they are not backed up.


I beam myself into the future

Strangely enough, for the 2010s, in some ways the Atari Portfolio from 1989 is a worse deal than the Canon X-07 handheld from 1983 I once wrote about. This has perhaps more to do with computing trends than actual hardware specs. The Canon had an integrated BASIC language and graphics commands, enhancing it's role as a calculator zillion-fold, whereas the PowerBASIC for Atari was sold separately. Given the esoteric nature of Portfolio's memory cards and connectors I have less chances of getting anything transferred to the Portfolio than with the Canon tape/serial interface.

Obviously the MS-DOS connection gives Portfolio great generic potential, but this potential is difficult to put to use with an out-of-the-box device. There's no DEBUG, no file editor, of course no assembler. It's possible to hack up an executable file by ECHOing character codes directly to a file, though. A tiny program is created for slightly more handy file writing, then that file writer is in turn used for creating an even more complex program. This sounds intriguing and I'll be looking at this approach some time.

Although the Portfolio manages to cram in some nice software, this set is also very "office" oriented, showing that computing had begun to atrophy into imagined "tasks", paving way to boring PDAs. Later, high-end calculators like TI Voyage 200 better filled the niche that a Portfolio-type device might have been aiming at. (Note to self: write something about the Voyage)

Just like with all ye olde hardware, there are small existing communities, either for all things Atari or for the Portfolio itself. What I see there is no massive Portfolio cult, though, and modern additions are quite sparse. There apparently have been PCMCIA adapters for slightly more recent memory cards, and Wikipedia mentions a Compact Flash mod. If I've understood correctly neither work as a PC file transfer method as the cards will become Portfolio-specific. An SD-card adapter would be neat but I think there's none and might not be happening. 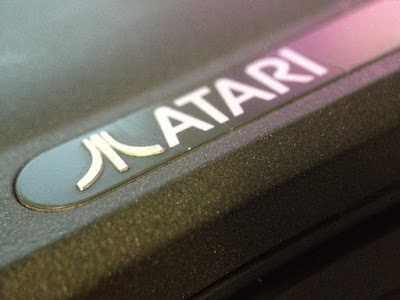 I thought I would refrain from mentioning it, as it's always brought up to the point it seems to be the only reference for this computer... But, of course Atari Portfolio is the device the young John Connor uses to hack an ATM in Terminator 2: The Judgment Day. There's some vague basis in reality for this, as the Portfolio can generate telephone dialtones from the Address book, something that might theoretically have found use in a phreaker's toolbox decades ago. However, the film clearly shows a ribbon connector.
Posted by Tero Heikkinen at 09:13