Lately I have used more reference images and/or nostalgia in my PETSCII graphics. Perhaps it's easier to judge the success of the image as it is based on something.

Although Neuromancer came out in 1984, it's unlikely most "kids" heard about cyberpunk until very late 1980s. So in a sense, Max Headroom was way ahead of its time, an "avatar living inside the television set", an image that I knew was cool without knowing really why. The faked computer graphics enabled this 1980s figure to false start the 1990s. 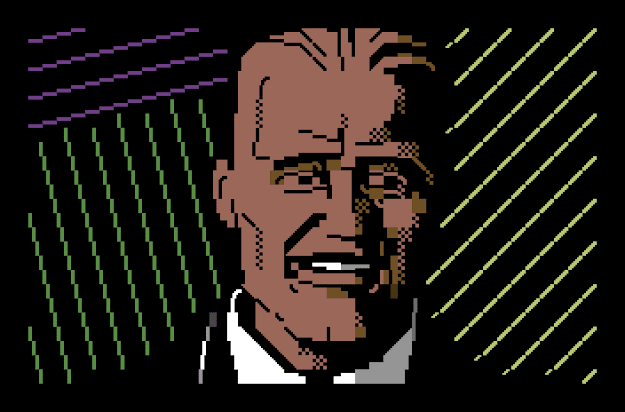 This PETSCII of Max Headroom (AKA Catch the Wave) is the closest I've ever come to simply translating a photograph, although I did use multiple images for reference and not just one. Even then it's quite challenging to fit it into character graphics. The likeness is not 100% spot-on but I did not want to use sunglasses to cover the eyes.

The two-part "comic strip" below was done for the physical Kuti magazine #57. (Go check it here) Apart from my dabblings, the issue features other PETSCII works too. Below is the original export from Marq's PETSCII editor, with a height of two C64 screens. The print/digi-version has slightly different appearance. 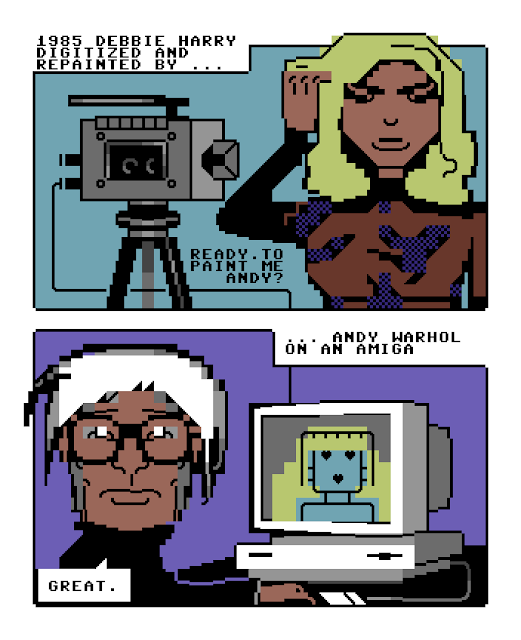 Maher's book about Amiga reminded me of the Warhol/Debbie Harry promotional event. I was surprised to learn that Warhol actually dabbled in Amiga graphics even after this promotion. And why not, there was scarcely anything else he could have used at the time.
I initially hoped to do a full spread, with 4 or more panels, with a vague notion of connecting different themes in a 'surreal' or diagrammatic way to this event. But I focused on two images and threw away any surrealism, simply relating the 'historical' event in a somewhat comical way. Did Warhol do a PETSCII after all?

PETSCII Non Stop. This is another recreation, but not from a fake CGI head but a real one. I mean, not from an actor posing as a 3D head. It gets confusing. I occasionally take up on "technical" challenges, such as wireframe graphics with a character set. A still from the famous music video Musique Non Stop served as a starting point for this head. 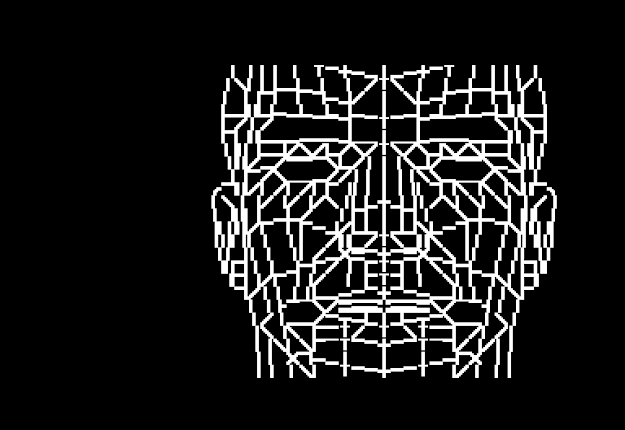 The result does not probably resemble any one Kraftwerk member but approximates the idea.

Winampscii. Now, the recreation of the Winamp basic theme on C64 is old in itself (there's a few on C64 that actually play something), but I haven't come across one that is full PETSCII. 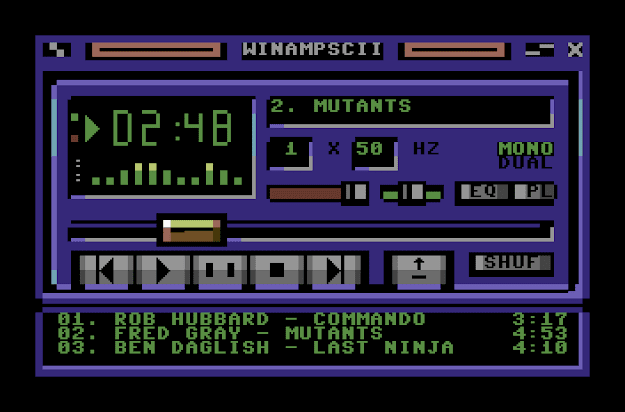 Thanks for Marq for pointing out the nostalgic winamp skin website and suggesting the Winampscii theme. I did try to make it somewhat more SID-specific. Supposing you have two sound chips (a real possibility), the Dual mode might make sense and in theory a pan-slider could be used.
This was done rather quickly and in hindsight I might have changed a few characters here and there.

There's a couple of recent works that do not really fit into the above "digi-conscious" theme.

Advanced Pet Dragons. Although this looks like an "animation" it actually has a couple of code effects, significantly a primitive ray-caster. The material could have been crammed into an animation, too. 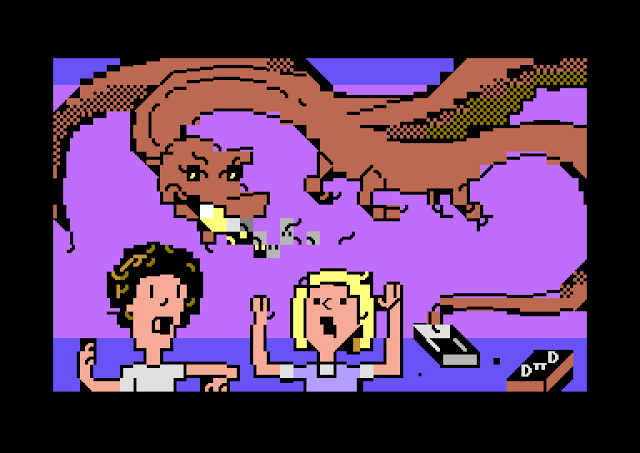 Since I made Digiloi, I have sometimes toyed around with other PETSCII game ideas. These days they tend to result in small-ish demos rather than full games, but that's better than nothing I guess.
The history with the Advanced Pet Dragons is that I had a somewhat ambitious game in the works, that in the end could not be reasonably completed. So I simply picked up and modified the ray-caster routine to draw dungeon animations.
PETSCII Gunship, to put it simply, is a recreation of the intro screen of Microprose game Gunship (1986). 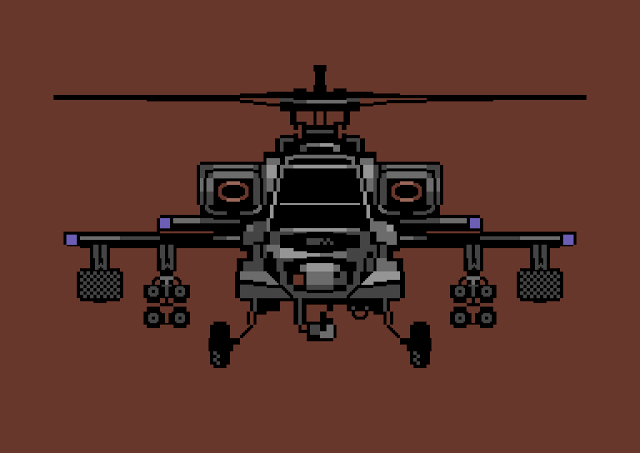 I saw the screen could be turned into a PETSCII with very little loss. Seeing this opportunity pushed me to do a rendition.
Although the Commodore 64 version was the starting point I also had a glance at the Amiga and PC versions. For example for the nose I deviated from the C64 source as it didn't look nice.
Hard Eagle, Floppy Disc is a quick and jokey re-imagining. 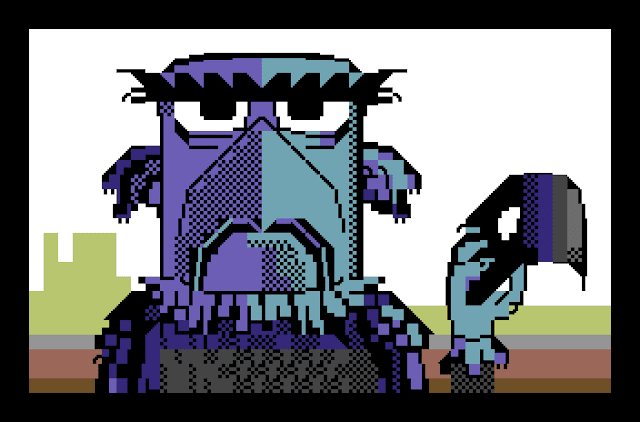 Ok, it tends towards the digi-consciousness theme, as it is yet another version of the Eagle Soft Inc. crack intro picture, burned into the retinas of a generation of Commodore 64 users.
This relates to a small scene drama not worth discussing here, suffice to say PETSCII art was under attack too. I felt a need to do a something humorous and have the ever so serious Sam the Eagle to play the part.

Post script
In the past I've been a bit negative about recreating already existing images on PETSCII or pixels. But now I've found it quite educational and become a bit more accepting about using references for building images.
Still, I've not followed images very slavishly. But even converting an image is a way to learn and discover, as the source image pushes you to try character combinations you might not otherwise use.
The task is also bit like translating. I could try to copy the bitmap image and then ignore positions that cannot be done. But it is more to important to get the sense of the original and even add detail that's not really there.
I didn't bother to build individual links to csdb, but these works and others can be found from under
https://csdb.dk/scener/?id=25645
Posted by Tero Heikkinen at 13:40