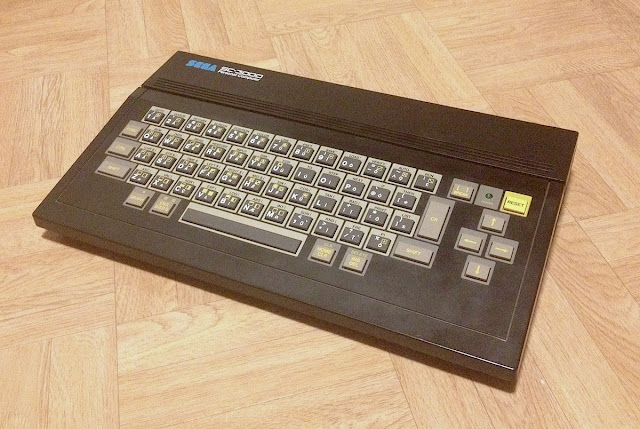 Sega SC-3000 (1983) is one of those gaming computers that do not have a built-in BASIC. I have some stuff lying around for it so it's not a complete waste of space. I enjoyed trying out Sindbad Mystery, one of the more decent games for the platform, a sort of Pac-Man with elements from Pengo.

Given that the SC-3000 does not have a built-in BASIC, it is a bit strange that there are BASIC keywords on the keyboard. Fiddling with the BASIC cart I have, I've found the speed to be reasonable, but it's a bit hard to guess what keywords there might be besides the ones on the keyboard. Apparently the higher level BASIC cartridges have more commands than the smaller ones, possibly for graphics and sound. The keyboard in my unit works so poorly that it's impossible to do anything but a few lines of code.

The computer accepts good old Atari joysticks, which is good for games, as the Sega joysticks from the time are atrocious. Some games make use of the Sega second fire button, not available on all joysticks. The computer has tape connectors, a mysterious DIN-5 "video" output and a TV out. All in all, the black case is quite pretty, very flat and sci-fi. The sleek lines are greatly augmented by the flat rubber keyboard which has BASIC keywords imprinted above each key, and...

Wait a minute, haven't we seen something like this before?

The rubber keyboard is suspiciously similar to the one in Panasonic JR200U. Ever since I got my Sega, I have been wondering about this feature. No, the layout is not identical, but there are enough similarities to make it certain there was some common origin for the two. I may never know the story behind this, but at least I can try to find out how similar the keyboards really are. Could they even be interchangeable?

I started the task with mapping the keyboard input of the Panasonic JR200. From the circuit board it is visually obvious how to start figuring out the columns and rows for the keyboard matrix, and after a little while of poking the connections with a short cable, I could map it for the most parts. (This way I could avoid breaking down the actual keyboard element, which might ruin it.)

Some keys, such as shift and control are left out for now, and I'm unsure about what some of the keys do. Here I have only included the keyboard-relevant parts for the table, as the rest of the 22 cables relate to the power LED, speaker and reset button.

Now, let's see the conditions under the hood of the Sega. The case top comes off in two parts. As the keyboard part is removed the backside of the case top can be kicked out. The insides are a bit crude, what with the bent, amorphous metal/folio covering most of the motherboard, but luckily the keyboard connectors are immediately visible. There is similar number of cables between the keyboard and the motherboard. This looks promising enough...

Here I found no need to examine the Sega keyboard connector, as the keyboard matrix (and a neat mod) can be found from here. I only rapidly checked that it holds true, poking a cable into the connector while running the BASIC cartridge. The table below is built using that information, assuming a running pin number from left to right, reading from the front of the machine.

The matrix has similarities with the JR200, especially when looking at the top half of my table. However there the similarities end. Compared to JR200 I'd say the Sega version is the messy one. Instead of the neat 8x8 matrix there is a 12x7 grid. It still might be possible to wire the Panasonic keyboard to the SC-3000, but it is not as straightforward as I had hoped. Then again, I'm not going to break my Panasonic anyway.