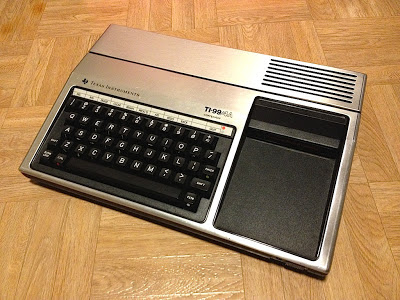 Just a quick peek at the computer called Texas Instruments TI99/4A. It's pretty old, from 1981, based on the earlier TI99/4 from '79. This makes it something of a contemporary to Sinclair ZX81 and Commodore VIC-20.

From what I had seen from pictures, I assumed this to be a more fun-sized computer. Possibly the TI brand made me expect something a bit more calculator-like. But really, it's huge, easily MSX-sized. The appearance is quite polished and the keyboard is very solid. It seems to me that quite a few US computers went for the "aluminum/black" look, don't know what is the origin for that. (TRS-80 and Timex Sinclair spring to mind.)

Despite the good physical quality, the keyboard lacks some crucial editing keys, like backspace and arrow keys. These are hidden behind FUNC-combinations. Curiously, the " character is via FUNC+P and not SHIFT+P, inconsistent with other characters. My unit is somewhat prone to double-type, but this could be the keyboard showing its age.

For a company that is renowned for its calculators, the TI calculation keys are surprisingly not very prominent. On the right side, in front of the front-loading cartridge port, there is a flat surface which to modern eyes might look like some kind of trackpad, but is really just a flat surface. There could have been some room for a keypad, who knows. I've read on the net people call it lovingly the "cup warmer" for the heat it gives, which is good to know because otherwise I might have been worried about the warmth.


To my liking, this computer is bit too much like a video game console with an added keyboard and a BASIC added for a good measure. The BASIC does not integrate with the computer in the way it would do in most other home computers, so it seems more like an add-on that just happens to be included with the machine. Although the expandability of the machine is apparently very good, the built-in facilities and connectors are poor, really almost nothing. For these various reasons I've not been inspired to explore this computer too much, even if it is something of a minor classic.

If I've understood correctly, the computer uses the video chip memory as its main memory. From what I've read, the central processing unit can really only access 256 bytes of memory, and the processor is - get this - 16 bit, a first in home computers! Although the setup makes it sound like TI could be potentially a fast computer, as it happens this does not seem to be the case at all. I don't have any games but at least the BASIC is extremely slow, possibly the slowest I've yet encountered. It takes virtually seconds to print a bunch of numbers in a FOR-NEXT loop. LISTings are almost like teletyped.

I'm usually quite intrigued to explore various BASIC dialects in the old computers, and I was lucky enough to get the computer with the BASIC manual. Curiously enough the manual is a Finnish version published by Salora, who also branded Laser 200 as Salora Fellow in Finland at around the same time, but that is another story.

I was eager to find out whether the BASIC had some similarities with the "TI BASIC" included in their later calculator lines. Alas, there does not seem to be any meaningful relation. This BASIC is not really geared towards calculation any more than other similar languages back in the day. The BASIC displays large numbers in somewhat more user friendly format but that's about it.

Looking at the manual and trying out the commands it strikes as weird that there are no PEEK or POKE commands that could access the memory directly. So, the programmer can forget about inserting machine code statements via BASIC. Also, as the video chip is the famous VDP as used in MSX and the like, there's no straightforward "character memory" to mess with either. Instead, there are CALL commands for doing various helpful things that would otherwise be far too slow to do in TI Basic, such as filling portions of the screen and re-editing the character set.

As a separate product, there was some kind of "extended" BASIC and an assembler too, which presumably give more freedom to the programmer. As it is, the access to the hardware is very limited, and it's even a bit uncertain how much memory there even is. The manual boasts of the 16k memory available to the user in addition to the memory used by the TI BASIC, which really cannot be the 256 bytes the processor uses? So, what is that memory about? Also, one part in the manual warns that the memory upgrades available do not extend the available memory for the BASIC, but are instead used for the other (separately sold) extensions. Wow.

TI 99/4a is a kind of a neat kit, but allows for very little exploration and experimentation. This makes it somewhat dull, even if the BASIC command set is quite potent for its time. Although the TI is in some ways superior to both ZX81 and VIC-20 I mentioned early on, the available potential to the user is clearly inferior, at least from out of the box. To assess the gaming potential, I'd have to see some actual games. Due to the VDP chip I expect them to be quite close to MSX and Colecovision in visual appearance.

For what it's worth, here is TI99/4A making a cameo in an italo-disco music video: