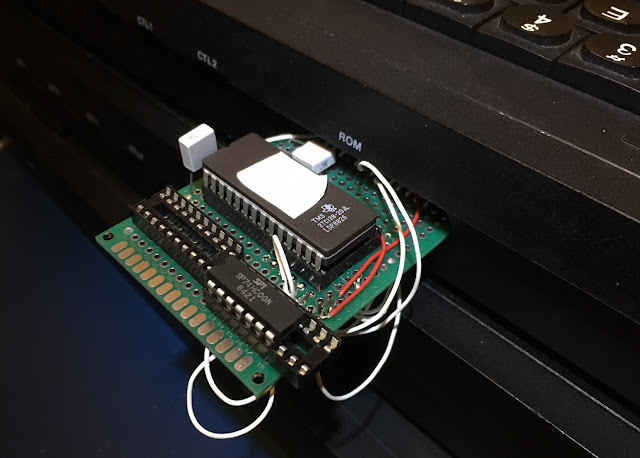 A 28C128 EPROM chip can be connected to the Sinclair QL through the 16K plug-in cartridge ROM port. The memory occupies the space (0xC000-0xFFFF).

I can't guarantee this is the 100% definite way to do it, as I haven't been able to compare this to an existing EPROM cartridge. But it worked for me.

The diagram below shows the basic connections between the QL ROM port pins and the EPROM, with a 7400 chip between. 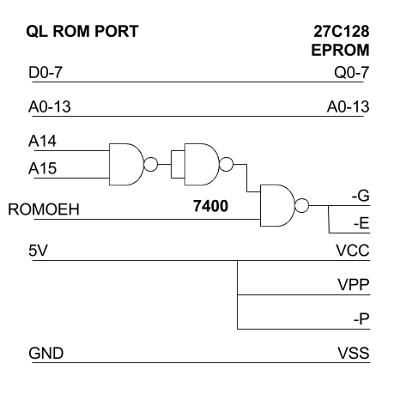 In the above diagram, the NAND gates represent the activity of a 7400 IC for combining the signal of A14, A15 and ROMOEH, connecting the final output to the pin that controls the EPROM enable state. (Low=enable) The data lines should only be active when all of the A14, A15 and ROMOEH signals are high.

I was unsure about the role between -G (gate control) and -E (standby), as the device works when connecting both together. According to the EPROM datasheet the -G is used to set output enable/disable whereas the -E can be held low for device selection.

"Data is available at the outputs after the falling edge of G, assuming that E has been low [...]" makes me think that it's not a big deal timing-wise but it might be clearer if E was low all the time.


I have three QLs, and my first cartridge attempt worked in one of them. This led me to waste time thinking the "fault" could have been something about the differences in the QL models. In this version I had left the A14 and A15 floating, assuming the ROMOEH signal is enough to indicate the 16K area is addressed.

However as it should have been quite obvious from the start, the signals of A14 and A15 need to be combined with the ROMOEH, as the ROMOEH signal is high whenever the whole ROM area (0x0000-0xFFFF) is being read, not just the 16K area.

I used a Toolkit II ROM as a guinea pig. The onboard ROM (version JS) seems to find it "twice" which I hope is normal. The TK2 functions can be activated with the TK2_EXT command and all seemed to be ok.

However this might be the beginnings for making something else, a transfer device etc.

Edit 14.12.2017: I burned 2.20 version of the Toolkit II, which has the FSERVE fileserver. The file server works nicely from the ROM module and is a quite powerful function to have. It alone justifies this little project, maybe I'll write about it later.

(Ignore the top image which has all kinds of unnecessary things added to it.)

I have been hunting for a good PCB prototype board that would suit the project. It should be obviously with 2.54mm raster and double-sided so that it may have something that works as an edge connector.

I ordered a set from eBay with different sizes. The 50 x 70mm board with 18 x 24 raster is simply a perfect fit for the QL ROM cartridge slot, and there are 16  pads at the edges that just about work for the connector after modifying the board a bit.

The sixth position is cut off, to a depth that includes only the first through-hole. The QL case slot is wide enough for the 50mm width so nothing else needs to be cut.

The raster holes are plated through, and as the pads are very short, this means the holes would immediately short the top and bottom connector pins. I suppose a variant without through-plating might exist, but it is difficult to tell from the eBay listings.

I rotated a paper/exacto knife blade from both sides of the hole, this way I could get rid of the through-plating from the row nearest to the pads. After all it is a very thin layering. This needs to be done briskly enough so that the chipping away can be felt, yet carefully enough so that the holes don't get ruined.

In the first row I need to be certain there is no contact between the two sides, no dust or thin filaments. This phase adds a bit of tedious handiwork.

The cut could be deeper but then the next row of through-plating should be removed too. One row is just enough for holding the cart in place. The pad width acted as a good guide for the cut width in this prototyping board.

What follows after is likewise tedious connecting of the pads to the chips by wire, for both sides. There shouldn't be too much solder on the pads, so I tinned the wires beforehand and tried to carefully connect them to the pad edges. Even then I made a bit of a mess, and I cut away extra solder with the paper knife.

There's a method for creating paths by solder for this type of board, but it's also slow and results in huge lumps of solder. I used wires for connecting nearly everything.
Posted by Tero Heikkinen at 21:34