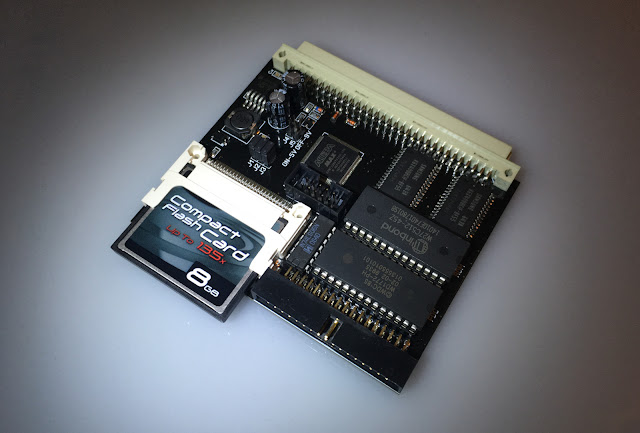 The Tetroid Disk Interface is a memory expansion, disk interface and card reader for the Sinclair QL. It adds 768K memory to the 128 of the plain vanilla QL, totaling the memory to 896 kilobytes.

I ordered this from Russian Federation via eBay, with a Compact Flash (CF) card thrown in. The seller is identified as "tetroid" around forums and SellMyRetro site, so the interface is called Tetroid Disk Interface. The device can be considered an extended clone of a Miracle Trump card for the QL.


Fitting inside the case

Looking at the board, I check the jumpers are in good position for the plain QL, as instructed by the manual leaflet. Three jumpers turn on/off the disk interface, the QUBIDE/QUBATA interface and the extra memory.

Before I could get the card to fit, I had to whittle away just a tiny amount of the plastic from the QL with a paper knife. After this the card slides easy along the rails and fits comfortably to the extension port. The card sinks in completely, only the CF card protrudes slightly over the QL footprint: beautiful. 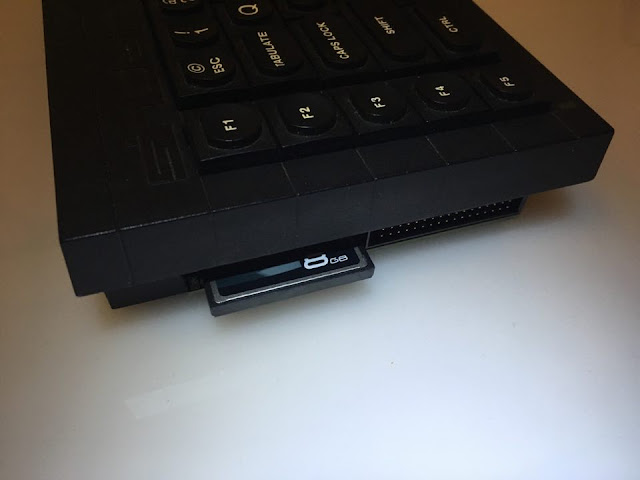 Booting the QL with the included Compact Flash card, my first thought was: "It takes a bit long to get to the BASIC". But the CF card is filled with goodies and extensions that load on start-up, so the QL eventually ends up with a sort of graphical desktop.

Glancing at all the start-up messages, there are ToolKit 2, Q_Liberator (basic compiler?) , TURBO TOOLKIT (another basic compiler?), Pointer Toolkit, Qmenu, Scrap, History Device...  The CF card contents are a very thoughtful inclusion and makes me already feel I have something new to explore. (Edit: It seems I've maybe misunderstood this a bit, it's not that all the above software is on the card, but the related runtime libraries needed. Anyway, there's a bundle of things on the card)

As the QL has multi-tasking, a notepad, a calculator and a BASIC command line window can be open at the same time. The GUI is a very early effort, many windows often show functions and technical details that are text-based anyway. All this is very interesting, but not my focus now. Perhaps at a later time...

Funny to see that there is less than 480Kb left after everything has been loaded. That's still three times more than the normal 128, which wasn't all usable anyway.


Without the CF Card

Next I took the CF card out and booted the QL again. (Don't insert/remove the CF card when the power is on).

Boot time to SuperBASIC is fast, but I guess checking the 800K memory adds a bit to the process. I shed a tiny tear for every second added to the boot time, because for me directness is a major charm of old computers.

The Tetroid manual leaflet obviously does not explain how to use your QL or the extensions. It doesn't even describe the Trump card functions, so the manual for that device is recommended reading.

The PRINT (PEEK_L(163872)/1024-128) command I found from a QL forum can prove the 896 K of memory is there. But to make things more simple, the Toolkit II can be summoned from the interface. TK2_EXT command gives the command set. Now I can PRINT FREE_MEM to show the remaining memory. JOBS shows the multitasking jobs, FSERVE starts the file server, ED runs the improved BASIC line editor.

The floppy drive, if it is connected, can be accessed from FLP1_ and the Compact Flash card is WIN1_. If the FLP1_ is present the QL will run the boot file from there.

With this amount of memory, a RAM disk starts to make sense. Multiple microdrive contents could easily be run from the memory. The default virtual drive is RAM1_ and again the Trump Card manual is your friend.

It's also possible to break out of the CF card boot basic file (SPACE+CTRL). This way I can have a peek at the WIN1_ drive from SuperBASIC without loading all the files into memory. The boot file can of course be altered to stop the commands from running next time.

The Compact Flash card does not show up on my Linux system, as the CF card is apparently in a format that can only be accessed with a Windows-only image editor and the QL itself. As far as I understand, there's no way to read/write files directly like you would with the mountable images inside a ZX Spectrum DivIDE CF cards. There's also probably no easy way to access the image file with Linux at the moment.

Well, I have my HxC Floppy Emulator. It took some steps to set up, though, so I'll put my notes here for future use.

The basis for the following is the document Using an SD Memory Card with the Sinclair QL, which contains information about the disk format parameters.

There are a bunch of Jumpers at the backside of the HxC. The organisation of these may vary from model to model, I have a boxed one with the pins bending backward. To make the HxC work with my QL, the jumper needed to be at the top left corner:

To get the HxC Floppy emulator windowed utility working on Linux, I followed these instructions exactly:

(I have Linux Mint 18 Sarah 64-bit). The command line version does not seem to be sufficiently detailed to generate these kind of images.

After running the HxC Floppy Emulator, I followed the how-to document mentioned above.

Use settings to tick out "auto", and choose Generic Shugart, which probably is the default anyway. 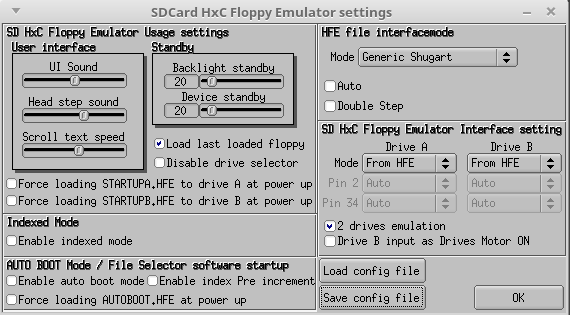 At the HxC main panel, use Load RAW Image to get to the screen below. Configure the format according to the specifications from the "Using an SD card..." document, or follow this image at your peril.

I ignored all the parameters that could not be followed from the document. 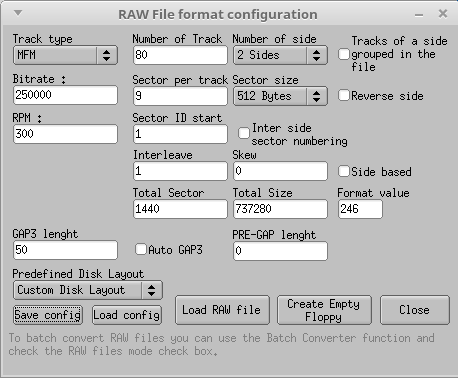 I tried to generate an empty image with "Create Empty Floppy", but although the HxC accepted the image, the QL did not recognize it. (Edit: It might have needed formatting)

I then used Load RAW File to load an existing DD raw image that is based on an emulator file. This I did not create myself, but downloaded from a QL forum. It may or may not be available.

After OK'ing the result, it can then be exported from the HxC main menu as a .hfe file. Copy this to the SD card.

On the QL end, the HxC device is connected to the Tetroid. Turn on power for the HxC device. Select the hfe image. Turn on Sinclair QL. The drive is recognized as FLP1_ in SuperBASIC.

Here I have powered the HxC from the 5V / GND pins of an Arduino, which has no other purpose here. When powered with an 9V adapter, the 5V output should have enough amperes to run the HxC. Powered from an USB, maybe not so much. Anyway this may not be ideal and I'll move to a PC power unit when feasible.

I once looked at an SD card reader device called QL-SD. This was a very cheap alternative, a replacement for a microdrive, including the Minerva ROM upgrade in the deal. However it also took out some memory away so for a 128K machine it was also a bit of a downgrade. Moving files from and to the SD was also not straightforward as the files were inside a disk image, again not so easily accessible from Linux.

The Tetroid interface also adds RAM and the floppy interface, an all Trump card functions, something the QL-SD did not offer.

Do these devices work at the same time? I have not yet tested, but I think there's no reason why not.

I inserted the TDI to my QL-SD equipped Sinclair QL, which has the Minerva ROM (JSL1) that came with the QL-SD. The TDI works nicely, and depending on the three TDI jumper settings, I can get one or two of the drives on-line, but never all three of them.

At least all drives can be reachable in some ways. With configuration J1+J2 I could move files between HxC and the QL-SD, and with J1+J2+J3 between the CF and the HxC.