(Continued from Part I)

I'll continue describing the MINI ZX Spectrum 128+2 project, a.k.a "The sawed-off Spectrum". I'm not entirely satisfied with the turn of events described here. Also, some of the following stages might be avoided, but bear with me. 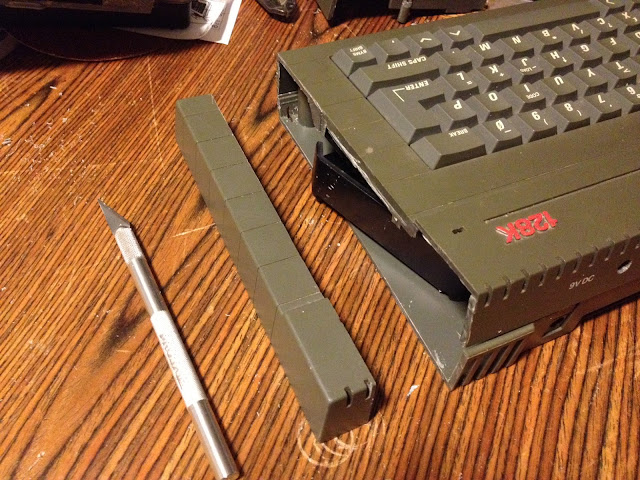 I previously cut off the cassette recorder part from the main body. I have also cut about two centimeters off the end of the recorder part. The opening will be capped with this small part. Just as the first cut was aligned with the left side of the tape recorder opening, the second cut was positioned with the right side. This was pretty convenient.

Now the cut edges need to be smoothed and connected to each other.

When I understood the project would involve sanding, I was somewhat demoralized. It needs a lot of patience to get good results. I might also end up doing a lot of work that gets me nowhere (I'm thinking of the seam). Yet I could not imagine any other way for smoothing the part edges.

I used 120 grit sand paper for the more rough work and a 240 grit "metal" sanding paper for smoothing it off. The little end piece was worked against a sanding paper on a table surface. For sanding the face on the Spectrum body, I created a bit more sophisticated sanding setup.


I positioned the Spectrum cover upside down on two thin wooden "rails", so that the body would stay level. I glued a piece of the 120 grit sanding paper on a wooden block. This helps to get the sanded surface into a 90-degree angle.

(Of course, sanding plastic may be a bit of an unpredictable health hazard, so I'm not really recommending it. Especially machine sanders tend to produce fine particle dust floating in the air. I did some work inside but as the workload got bigger I moved outdoors.)

Sanding the body part with the block did not take long. In fact, the smaller piece was more difficult to do and ended up a bit skewed.

This is the stage that I have been longing to get at. Would the two pieces connect well? After the sanding, the connecting surfaces turned out to be better than I expected. I did not think too long and just used a simple generic "Scotch" plastic glue to put the pieces together. Although the parts fit each other very well the seam line remained very visible, as expected.

As can be just about seen from the image below, the piece is at an angle with the body. This was a result of careless sanding of the smaller piece. The process almost automatically eats away the shorter ends, where there is less surface area. Therefore the angle did not stay rectangular. Some more thought could have been used there. Fixing this would have required so much more sanding I let it be.

I also did a little extra thing, which may or may not be silly. I used a solder station in 300C setting to melt and fuse the seam from the underside. I hoped to give some additional firmness to the connection, as I don't trust this glue that much. However, I suppose it's not a good practice for connecting plastic pieces. (Also, the resulting gases and stench are quite horrible.)

Why not "fuse" the topside too with the soldering iron and sand off the residue? I did not dare to. It might have resulted in pits and holes that would have been impossible to remove with sanding.

I might eventually need to spray paint the cover, to make the seam invisible. But in order to do that, I would need to level the seam completely with some kind of paste, and sand the surface before painting. No surface unevenness can be hidden with the paint alone. I do not have any good filling material now, so this stage will have to wait a little. Of course this somewhat defeats the purpose of sanding the faces in the first place, as with the paste almost any holes could be filled prior to painting.

So, what was meant to a be a very simple cut, has become a complicated mucking around with different materials, glues, paints, primers and whatnot. Nevertheless, the initial idea has now been mostly achieved. The right side is slightly longer than in the original mock-up image, but this way I could avoid creating problems with the heat sink. Besides, this outcome resembles the original Spectrum 128 and Spectrum+ asymmetrical designs, so it can't be all bad.

Putting it all together


I cut a part out of the heatsink with an iron saw. This way it can be bent tighter. The sink is now so small that it would be possible to make the computer as short as in the original mock-up image. But I'm ok with the results for now.

Here, the modified heat sink is relocated inside the bottom part of the casing, which has now been put together with glue and melted plastic. The original L-shaped heatsink curled around the corner of the screw holder and faced the grille behind the machine. Now it's bent into a strange block. I just assume this is sufficient, but at least some testing is needed before I can say this is safe.

If I did this again, I'd make sure to bend the heat sink around the original screw holder position. (I may still do it later). This requires sawing off a bit off the heat sink. It would have been easy to saw off before the piece was bent, but I avoided this precisely because I thought I'd avoid sawing the heat sink.

If positioned as in the image above, the heat sink will touch the bottom part of the box that contains the keyboard. (It is held in the top part of the plastic casing, not shown in the pictures.) The heat now probably spreads to that element, which may not be so good. It is much better to push the sink nearer the backside of the computer anyway.

I've for now abandoned the idea of painting the surface. The Mini spectrum is still meant to be a useable object, and spray paint wears off a bit too easily. I'm now looking into the possibility of concealing the seam with scratching. So it's more of a camouflage technique. The seam can of course be seen in good lighting conditions, but it's not so prominent as before. It requires some "artistry" to create the best optical effect. What hides the seam from view from one angle may not be sufficient for another.

I like the scratching idea because it solves the main problem and can be still undone if I find a better solution.

For the most part, the 128k 8-bit computers were placed into big, imposing cases with little more inside compared to their predecessors. In terms of weight and dimensions this was a step backwards from the 16-64k wave of 8-bit home micros.

The mod ought to fix this problem somewhat. Let's see what the numbers say:

(Some of the values are taken from old-computers.com. 128k Spectrum weight was not available.)

I'm not saying that smaller and lighter is always better, as there's bound to be a comfortable size for the keyboard and a too light computer might be "swept by the wind". But it is great to get the bulky old 128k+2 more closer to the Spectrum+ dimensions.

The modified +2 required some more work than I anticipated, but it's still not too huge a project. Of course, having all the tools at hand was a big incentive for doing it. It might be a bit expensive to buy all the saws, knifes, glue and sanding paper just for this purpose. But I'm confident it might be pulled off with less equipment.

This has not been an electronics project, so these questions are still open:

-How to rewire the power LED?
-How to build a tape audio in port? (Maybe not necessary)