Here's some Commodore 64 visuals I've been working on recently. 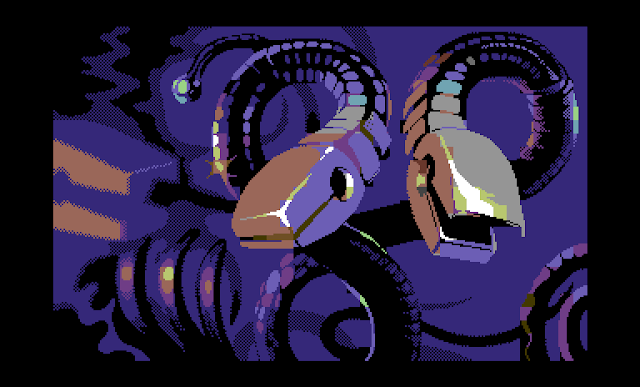 The two snake heads were laid out long time ago, but the detailing and background was done recently. The overall composition was in flux as I kept changing the position of the heads, adding the third blurred head relatively late in the process.

Never thought I'd say this but I feel c64 hires is easier than multicolor. Obviously, the resolution is higher, but importantly, the color choices are always local. With multicolor, you have to decide the overall background color at some point and that choice often has tricky consequences.


Lawless of the West: 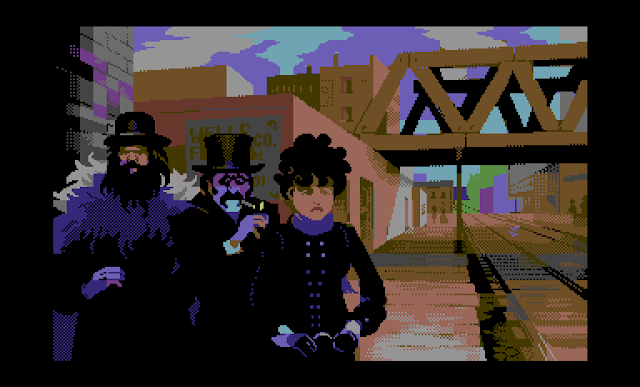 Another hires. This is an obvious tribute to the Commodore 64 game Law of the West, but it also derives a little from Edvard Munch's Evening on Karl Johan, though not very consciously. Other references: Italian westerns and a bit of McCabe & Mrs. Miller too. The grouping of characters also reminds me of the Italian comic Gli Aristocratici.

I have wanted to use a vanishing point perspective in a C64 pic for some time, and it is quite challenging to both have a sense of space and human characters in the same pic. Even here the people are sort of pasted on front of the background. 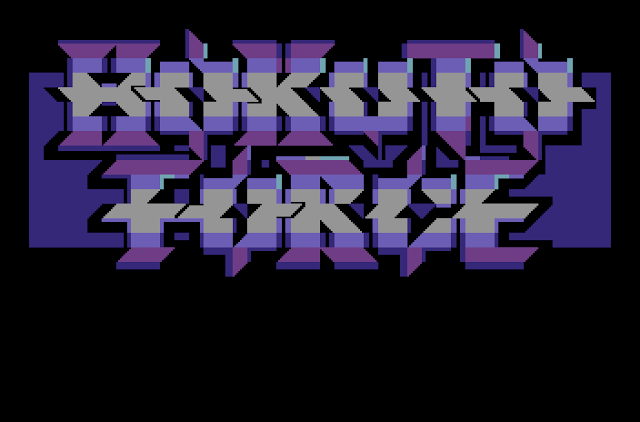 This is a PETSCII character art I made for the group Hokute Force for an Commodore 64 intro coded by Flavioweb. I went for a "metal band style" with some ninja-fic touches.

I'm quite happy how it turned out. Again, character art shows it's force: If this had been a multicolor bitmap, I might not have come up with the idea or been able to follow it through.

In hindsight as I look at the space between the F and the O, the gap should have been maybe a bit narrower... Oh, well.

The way the logo is presented in the intro is a bit different, the above is a compromise between the intended logo and how it works in the intro.

Posted by Tero Heikkinen at 12:32 No comments:

I've been dabbling in 6502 machine code for a long time, but only recently started to get a hold of it. My initial touchpoint was the machine code monitor on the Action Replay VI module on the C64 and a battered copy of the Commodore 64 Programmer's Reference I found from a flea market in early 1990s.

These days, I know a bit more, but certain things are a bit difficult to remember. Here's some.

For the longest time I did not get this. For additions, carry is cleared (with CLC) and then becomes set if the addition crosses the 255 boundary. The C flag is then carried (duh) over to the next ADC instruction as a +1. With subtraction, it's the reverse: the carry is previously set and then becomes cleared if the subtraction crosses 0. When clear, the SBC #$00 performs a SBC #$01, for example. After this, 16-bit addition and subtraction became easier to understand.


When is the Overflow (V) flag set?

This flag is not that useful to me, but I don't want to forget what it does.

As two bytes are added together with ADC, as above, the calculation is at the same time evaluated as unsigned and "signed". If the numbers as "signed" cross a boundary of (-127...128) the overflow will be set.

I've come across a misconception that says "if the 7th bit of the original value and the resulting calculation are different, then the overflow is set."

However, the following will not trigger the overflow flag, even though the 7th bit clearly changes:

I won't go around doing the two's complement explanation, which frankly just makes it more difficult to understand for me. Let's just have a look at how the signed numbers work:

The negative numbers have their minus sign bit set:

There's no special "signed mode" for the ADC command. Simply, if within the above representation, you do a calculation that crosses over 127, or under -128, the V flag will be set. Just like the C will be used when crossing over 0...255 in the ordinary representation.

So what the above example does is -1+2, which does not cross this boundary any more than 1+2 would set the C flag.

The reformulated rule: "If values with a similar 7th bit are added together, and the 7th bit changes, the V flag is set."

For the most part I don't see the point of the signed-system, as I can usually pretend that 128 or 32768 is the zero point in an unsigned calculation.


How the Indexed Indirect and Indirect Indexed addressing modes work

Most of these things have no place in fast code, hence I had not really looked at them.

Perhaps the funniest personal discovery was to see that it's possible to point to a 16-bit address using the indirect indexed addressing mode. I did not know the 6502 was capable of doing this so directly (relatively speaking). It's bit like z80's ld (de),a but not really. Because there is no 16-bit register as such, incrementing the address is a matter of using the ADC on the stored value as described in the first topic above.

Usually a memory fill is done effectively with something like this, which would fill the C64 default screen area with a "space".

We can write the start address to a location in a zero page and use the indexed indirect mode to write to the address, at the same time incrementing the stored value with a 16-bit addition.

Some have suggested that the zero-page works as a bunch of additional "registers" for the 6502 and this seems to validate that idea slightly.

(It is extremely slow, though)

When to use BPL, BMI, BCS, BCC branching operations

Some of my earliest code tended to work with BEQ and BNE only. Quite a lot can be achieved with them. The classic loop already used above, works without comparison instructions at all. Besides this, it can make a big speed difference how the '0' is used in data/tables.

My first instinct has been to use the BPL and BMI opcodes as they sounded nice and simple: Branch on PLus and Branch on MInus.

However, the BPL/BMI work with the signed interpretation discussed above. Parts of code might work as intended if the numbers happened to be in the +0...127 boundary, which probably confused me in the past.

This ought to branch if the A value is lesser than the one it is compared to:

The next one branches if the A value is equal or greater than the one it is compared to:

Strangely enough many of the webpages and even books about 6502 are incomplete when it comes to explaining in detail what each of the commands do. Even the books might just state that a particular opcode "affects" a certain flag, but may not open up how exactly that flag is affected.
Posted by Tero Heikkinen at 19:11 No comments: