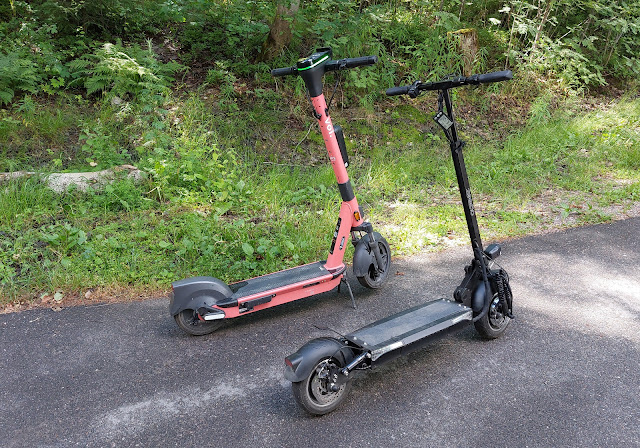 Although I have liked the wide handlebar, at 60cm it's perhaps just a little too wide.

For fun, I also measured the handlebars of various rentals. The measures are not accurate to the millimeter, I used a tape measure and it was not always simple to get an unobstructed measurement.

*) The handlebar is curved, I measured the straight line from end to end.

The comparison isn't very meaningful as I have only tried the Voi. But it looks though the 52cm is more common.

Interesting though that Voi should increase the width. Last year's Voi rental kickbike had 56cm width (I measured it).... but, strangely enough, this year's model appears to have 60cm wide handlebar.

If there's any new observation to be made here, it's that the handlebars are always somewhat ahead of the stem, which is not the case in the Zeeclo.

The 52cm is likely impossible to achieve, and perhaps not even desirable. But I could comfortably take 4cm off, if possible, making it 56cm.

The major constraint here is collapsing the handlebar, as the two "pull-out" components need some space to move. The above shows the parts (red) extended, demonstrating how little room there are for the various parts on the handlebar.

Although the left side has generous 30mm free room, the right side is crowded. After considering this from a few angles with CAD and pencil sketches, I decided that if I take the display out (the green part) I can do the cut.

The grips were again pulled out, and this was not as arduous task as last time.

There are plastic caps at the end of the metal pipes, after removing these I created a 20mm trace round the pipe using a vernier caliper and a paper knife. 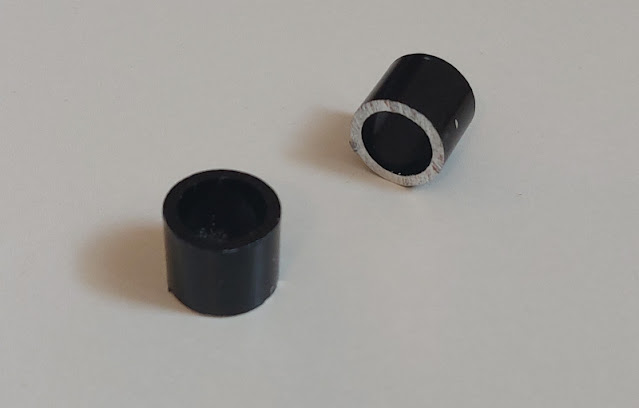 Then it was just sawing off with the hacksaw. The blade was Sandflex BI-METAL 24TPI, which, judging from the diagram, should be fine for hollow pipes with some material thickness. (22mm pipe with 2.7mm walls here)

I was a little rusty with the saw, but the second cut was already quite fast. With a hacksaw, the angle of the saw is not necessarily the angle of the blade and the cut. I took care to create a good vertical cut from the beginning, so it would act as a guide for the rest of the sawing. 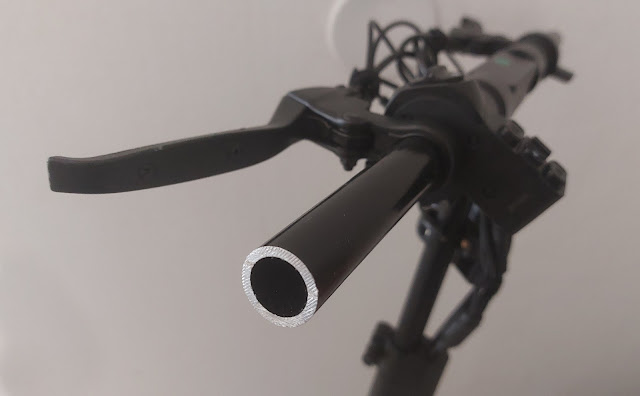 I guess the ends ought to be covered with paint, but I might still cut off a little more.

Putting the rubber grips back, I noticed it can be useful to cover the "airhole" at the end of the grip with my palm. This creates an airbuffer or something that allows the grip sink in very rapidly and easily. This felt counterintuitive as I thought the hole is there precisely to allow air out.

For a few days the display was simply left dangling around the wires.

I felt this change improved the handling of the kickbike. I could take the tighter turning arcs more comfortably, and it is even possible the handlebar is less shaky. 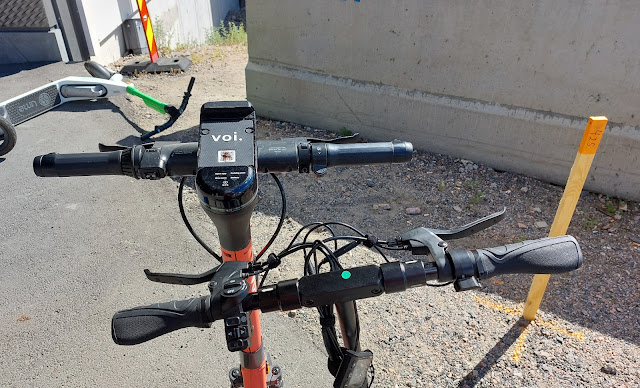 The height of the stem was accidentally changed too, so I can't attribute everything to just this one change. Looking at past photographs, it's not that different though.

There's the issue of the loose speedometer/computer. The local shops had a surprisingly few handlebar extenders. GoPro camera owners are well catered, but there's scarcely anything else. I couldn't see good parts in the hardware store, so this time I abandoned the DIY angle.

eBay to the rescue. After browsing a while I could find a shop in Ireland that sells these handlebar extension racks in 10cm and 20cm varieties: 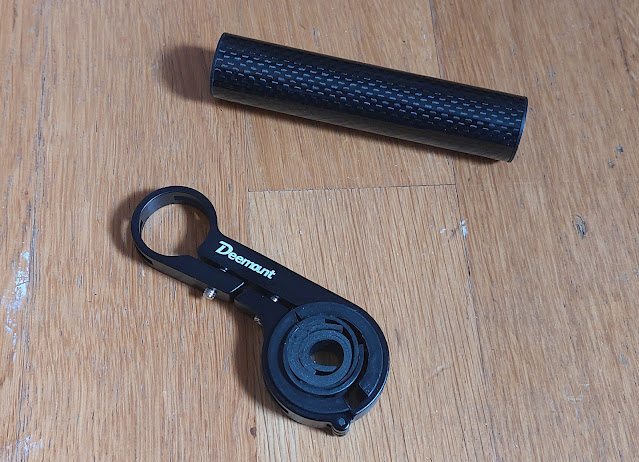 The 22mm pipe is extremely flimsy, but it doesn't add much weight either. The clamp is 8.5mm wide, which is rather good.

Below is one of my first attempts. Good sense says the display might be better near the center, or at the right side, but I couldn't resist putting it here among the other controls. 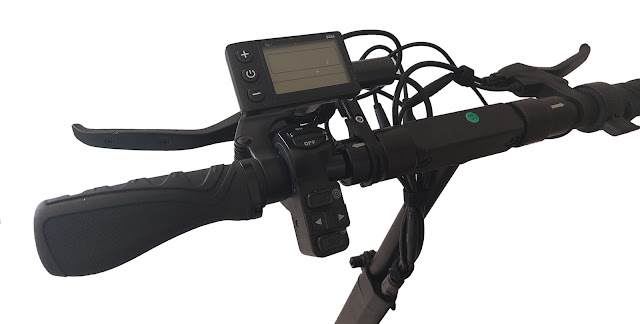 The clamp is in an unorthodox place, around the moving bolt. However at this point I don't have the 1cm space in the handlebar!

As I mentioned this could be fixed by having shorter rubber grips.

These grips are 13cm, but can be easily cut into 11cm without breaking the appearance. These grips didn't feel that great to the skin, but I can at least use them to test the idea.

The grips were not as easy to push in. Halfway through I gave up, and then I couldn't get it out!

Fortunately the material is so rubbery I can roll it inside out. This also gave me an idea of how to install the grips, should I want to use these.

But I will save these thoughts for another time.

Posted by Tero Heikkinen at 15:04 No comments: 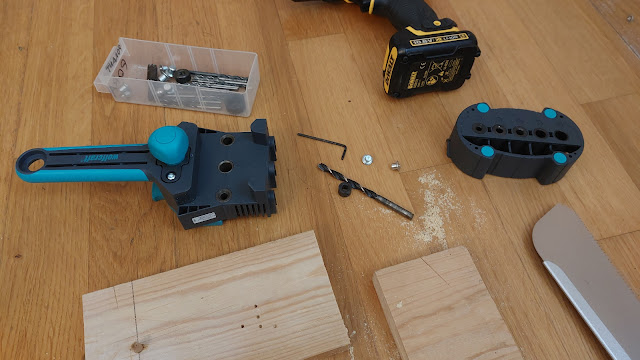 I got a drill guide and a doweling jig, after a situation where these might have been useful. But I can at least blog about them.

In the past I have managed with drilling through a wooden block and using that as a guide, but these ad hoc pieces easily get lost and mixed up.

When ordering from the internet, half the trouble is knowing the Finnish words for some items. Again, when writing this blog, there's the added trouble of finding the English words.

Often Google Translate can't figure these out correctly, and the terms are not certain to begin with. According to GT, tapitusohjain is "Tap Controller", and poratappi is "Drill Pin".

Looking at item lists of complete doweling kits was the easiest way to reveal the terminology.

Dowel joints aren't exactly the state of the art, but they can be done at home without huge tools. At least somewhat precise positions and 90 degree angles are needed, so guides like these can be handy. 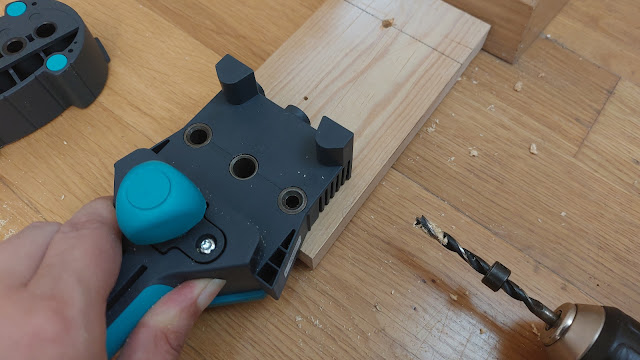 This jig has an adjustable/removable block that helps position the jig against an edge. Then I can drill 6mm holes through the device.

The drill stop is almost necessary for preventing accidentally drilling through the material. The stop is tightened in place using a tiny Allen key. It did keep falling out, though, it would work better on the non-bladed area of the drill.

At this position drilling the right hand side was rather easy. To make a 6mm hole at the left side was trickier because the tool can't be mirrored. (The holes are for 6, 8 and 10mm pins respectively)

Drilling the holes through the edge was little harder, it would be helpful to have the piece attached somewhere. 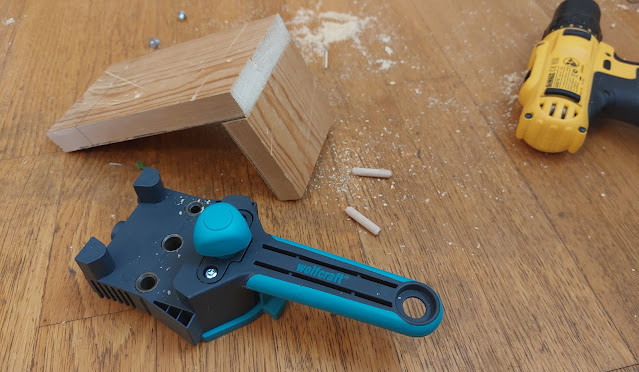 As can be seen my test joint is not very precise. But the result was ok considering the wood was not very even or cut very accurately, I wouldn't blame the jig here.

The idea of keeping the device at place with your hands is fast, but also kind of crap. Especially here when working with small pieces I kept trying to find a good position.

There are more straightforward jigs that can be clamped to the piece. But the Wolfcraft jig has a few tricks up its sleeve. The contraption can be held diagonally against the edge of the wood, the edge held firmly within the "X" shape of the jig. There are two ways to do this depending on the thickness of the wood. The pinhole position can't be adjusted but at least the holes will be equidistant. 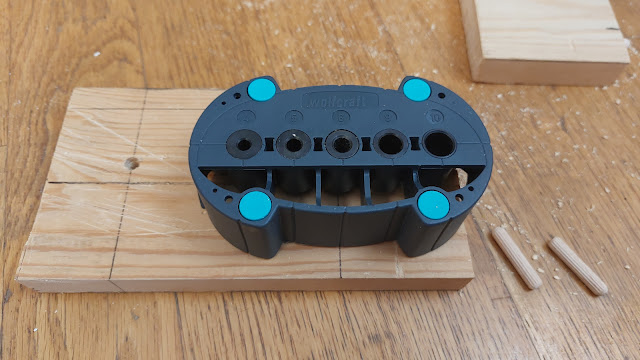 I liked the simple drill guide. ("accumobil Mobile Drilling Aid") It's not specifically made for dowel pins, but it does have the 6,8,10 sizes.

The device is better used upside-down, because what looks like the top works better for the special cases of drilling into a corner or a round object. 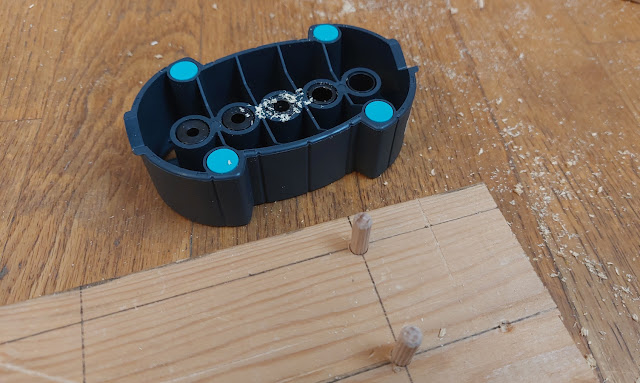 There are also marker lines around the guide. If you want to use them you have to mark your boards very generously because otherwise they are not very easy to see.
Here the wooden piece is so small I couldn't even check the lines from all directions. It may be a better to make ~2mm deep initial drillhole and then finish the job with the guide. Here I also made use of the drill centre points, these small metal pins.

The idea is that the drill hole positions don't need to be super-precise. Drill holes into the first board, then put the centre points in the holes. The second board (edge) is pushed agains the pins and the drill locations will be correctly marked.

For the edges, I again used the doweling jig, and I wasn't very comfortable with it but the result was fine. It would work much better if I had gone through the trouble of clamping and positioning the parts with more care.

So, altogether these felt robust enough for my purposes. 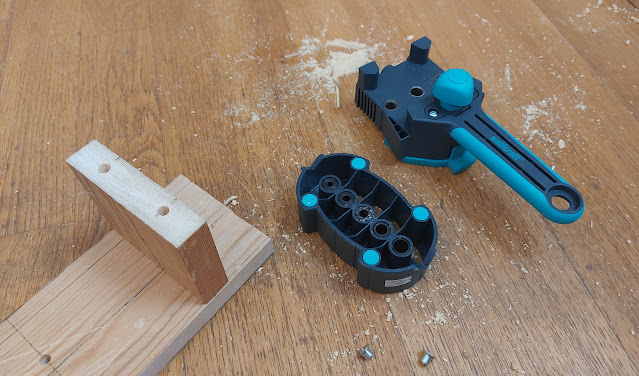 Posted by Tero Heikkinen at 19:09 No comments: