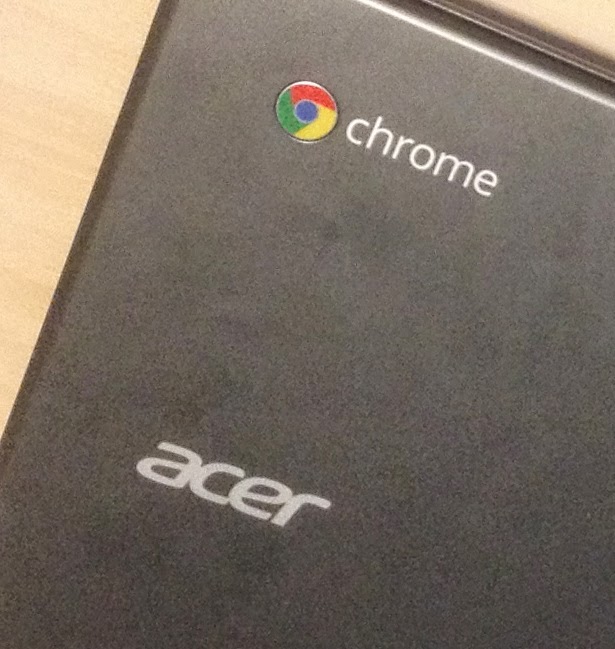 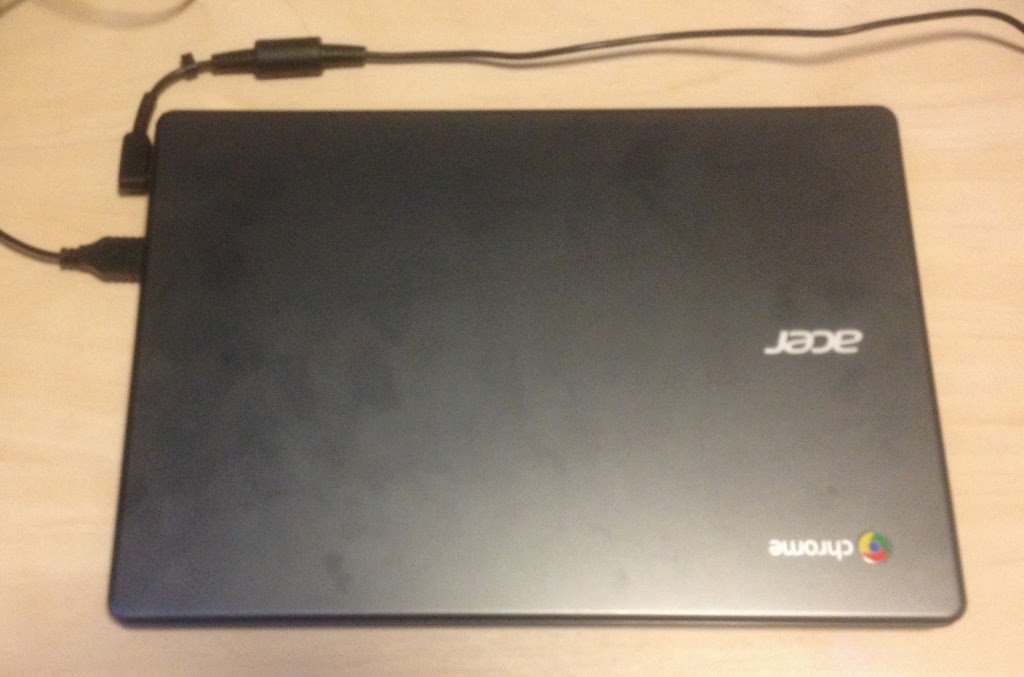 I was largely motivated by the possibility of installing Linux on it, but was also curious about the ChromeOS. Yes, the Google Drive/Docs environment works quite well on it. But I am a bit surprised that also some interesting (for me) off-line apps can be installed on it, DosBox, A Spectrum emulator, ScummVM, Arduino stuff etc.
This feature does not make the C720 a full-blown computer, though. For example, Caret seems a reasonably good environment for typing code, but as there's no broad "ecosystem" for compiling and doing other computery-type things, it remains an isolated piece of software. Although I can imagine a cloud-type-environment might make it more powerful.

Because of this, on the overall the ChromeOS is not very satisfying for me, but certainly more interesting than I thought it would be.

To the Linuxmobile, then. The Ubuntu 14.10 (chrubuntu) install was quite easy to do even if I'm not Linux-guru. (I used these instructions.) This way ChromeOS and Linux can co-exist as separate bootable systems.

I have to say that this did not result automatically in a smooth-running computer. I had trouble making the touchpad work, the scandinavian letters (ä,ö,å) do not display universally, and also the wifi side is not as reliable as on the ChromeOS side.


Browsing is pretty good with Chromium (with the little hassle of making Adobe Flash work), emulators (C64 on VICE, Amiga 500 on UAE) seem to have full speed and most of my Processing sketches were noticeably faster than on my 5-year old minimac. (This may also have something to do with how Processing has been implemented on Mac vs Linux). Also I could have my favourite code editor, Komodo Edit, on it and start compiling C64 code much like I did on the mac.

The biggest problem currently is that although the Ubuntu speed is generally very impressive, the Linux side seems to suffer from occasional slowdown which then results in inconveniences and "choppiness" on whatever program happens to be running. This ranges from hiccups in the Processing sketches to browsing session grinding to a halt on Chromium.

I'm unsure if this is result of the Ubuntu being too big after all for the C720, lack of memory, or if I've managed to mess something, but I think I encountered these problems already quite early on.

I have managed to make my Ubuntu smoother. Marq's suggestion might have removed the occasional choppiness...

However, the kswapd0 seems to be associated with the harshest halting. It seems Ubuntu tries to move things to swap even if memory is not full:

Also, this Chromebook has only a 16gig SSD, and makes it a bit tough to work around what to install and what not. If I keep the stuff light (small editors and retro etc) the space won't be a huge problem. Memorysticks improve the situation somewhat but I'm considering changing the install to something smaller and expanding the drive capacity.

So, I'll be looking forward to improving the Linux experience, and perhaps try out more ChromeOS apps and extensions just out of curiosity.

Posted by Tero Heikkinen at 14:14 No comments: