(Part IV of an ongoing series)

A couple of things have been done to the boxed C64.

The PS/2 keyboard adapter is Arduino-based, which still needs updating. I moved the Arduino USB connector, and added a switch for turning off the power line to the C64, so the Arduino can be programmed with the cover on using the normal USB-B cable.

However I still wouldn't dare hot-plug the thing, but at least I don't have to pull the cable out of the motherboard every time.

This setup helped me in repairing the keyboard adapter code a bit faster. The keymap corresponds better with my "Deltaco" PS/2 mini keyboard, and it's less prone to freezing. It works fine with many kinds of applications.

I also tried to use one of the alternative keymaps to route the arrow keys to correspond with the joystick 1 directions. You know, if you turn the stick in C64 BASIC you get 1,2, <-, space ... This would be nice as then I could keep a joystick only in port 2 and play those rare 1-port games with the keyboard. And the approach does work, for example, in my copy of Cosmic Causeway and Falcon Patrol 2 the adapter gives excellent control.

But in Boulder Dash and IK+, the approach did not work. This is likely because although the joystick port reading has been (unofficially) mapped to various addresses, the keyboard does not come in with the deal. If the game uses those other addresses, it won't work. Well, a nice idea anyway.

I added a cartridge function button to the front panel. The downside of this boxed model is the cart buttons tend to be too far to operate, so this became a necessity.

The contact wires are pulled back below the motherboard, to the vicinity of the cartridge port, from where they are connected to the cart. This requires a small wiring mod to the cartridge too. The IRQHack64 cartridge has a programmer port with GND, but the other pin needed to be brought out with a separate wire.

As an aside, I transferred a fair amount of one-file game prgs to the IRQHack, and more than 80% of them run. This gives me a more positive impression of this cart than my unlucky first experiences indicated. Even in the cases where the game doesn't run, more often than not I can find an image that works.

I'd like to bring the IRQHack SD-card reader to the front, and possibly change it to normal size SD, but this would be a huge commitment to that cartridge, and extending all sorts of cables might not be such a good idea. Updating the IRQHack menu could be on the schedule too, but that requires some more effort.

All in all, I'm starting to see certain weaknesses in this box layout. Mostly the problems could be overcome with the above additions. It could have been smarter to make the additions to a proper breadbox model, like others have done, but this project apparently isn't entirely about smartness.


I now have the more finished product C-keys adapter, but whether I will use it in this project or not, remains to be seen. Having the Arduino here gives more freedom and flexibility, but likely the finished adapter simply works better.

The needed changes point towards a further iteration of the box. I might have been on the right track when I thought about more unconventional board positioning, the cartridge at rear isn't exactly the best place for it now.

Again, more pre-planning might have helped in this matter. For example, a pre-emptive "network" of wires and connectors somewhere below the board could have been useful too, as now each new function needs improvised wiring and holes within the box.

Posted by Tero Heikkinen at 14:09 No comments:

I played the Gateway computer game way back, but had never read the book until now. Which was a mistake, as the book is rather good.

Humanity has spread to the solar system and discovered the ancient Heechee artefacts, a vast number of starships that travel faster than light. But as the Heechee are not around, nothing is understood about the ships. The destinations are random and guesswork at best. Journeys may take long enough to cause death by starvation, and some launches never return for other reasons.

High prices are paid to "prospectors", people willing to take up this cosmic lottery, as some of the destinations are huge payoffs, as are any discoveries about how the ships work. A nice outline for a game, indeed!

Pohl describes a kind of ridiculous market ecosystem that has arisen from this exploitation, vaguely reminiscent of the satire in The Merchants of Space. The book cleverly interweaves the cosmic dimension with the protagonists' retrospective reflection in the hands of an artificial psychiatrist.

The intro is rather chilling; the heroes' jet-packed exoskeleton mobile infantry platoon terrorizes an alien city with nukes, incinerating anybody that comes across, presumably civilian or not. Mind you, these aliens are not yet the bugs, but a humanoid culture with technology and language of their own. There appears to be no critical reflection on this act.

The alien "bugs" we meet later, are not just stand-ins for "commies", they are explicitly stated to be an example of communism in the extreme.

Heinlein also puts anti-Marxist and anti-communists sentiments in the mouths of the mentors. Marx's theory of work is stated to be wrong, as an amount of work does not guarantee a valuable outcome. Instead Heinlein seems to support the idea that all worthwhile things have to be earned. To simplify, the value morality here is that nothing that is easy to learn is worthy. Both individual and the society are tempered through hardships. The pinnacle of this seems to be the kind of camaraderie that arises from military training and bonding.

That's all interesting, but the moral tracts begin to sound like an extremist wishlist though, death penalty for "incurables", tempering our appreciation of freedom through war, and strict military discipline as a road towards enlightened citizenship.

The story really laces mysteries on each other: Firstly, the reader discovers the human race has developed to the point they live centuries, and are able to transport instantaneously anywhere on Earth. Then we discover that an alien race, the Puppeteers, who have not been seen for centuries, have now appeared with news that have long-term repercussions for the whole galaxy. The reputedly cowardly Puppeteers, for one, are going to leave the galaxy altogether. In the midst of this all, a mysterious massive artefact is discovered in a star system somewhat outside the human known space...

Some passages made me think of Elite (the computer game), can't pinpoint exactly why. At least the Wing Commander Kilrathi are supposedly based on the Kzinti. There are also Ringworld PC games, but I've not touched them.

I also felt that He-Man the original animated series is partly inspired by this setting too, and not only because there's a Teela in both. The easygoing mixture of fantasy and sci-fi, flying cycles and swords makes it feel a bit like an adventure in Eternia. 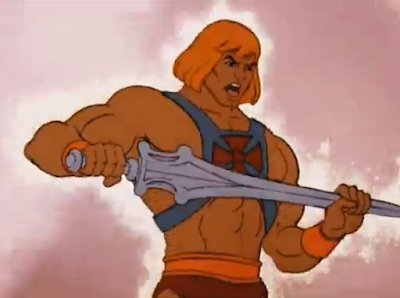 He was a hero. You could tell. You didn't need to see him fighting dragons. You need only see the muscles, the height, the black metal sword.  [...] He was clean shaven. [...] His hair was long and ash blond and not too clean, and the hairline shaped a noble brow. Around his waist was a kind of kirtle, the skin of some animal.

Ok, so that could be nearly any generic barbarian, but I still think I'm on to something.

The universe of the book is very colorful, with near-nonsensical and comical events juxtaposed with hard science lessons. It perhaps takes a physicist to speculate on the impossible and the improbable in a captivating way.

Here's a nostalgic childhood favorite, oriented more towards younger readers. The trilogy(!) describes an invaded Earth, where whole generations of people are accustomed to submitting themselves to high-rise sized machines in the shape of, well, tripods.

The tripods perform a "capping" ritual on people on the verge of adulthood, the cap is a technology that stunts the creative growth of the person's mind for life. As a consequence, people have no knowledge of humanity's past, electricity or even steam power. Past artefacts and whole ruined cities exist, but people are not encouraged to be too curious of these.

The story initially works as an allegory for the fear of growing up (well, it's also explicitly about it). The aliens could again be seen as us, as they behave unto as as we do unto "lesser" beings.

The story hasn't aged too badly, but the position of girls in this boyish adventure, and in the depicted world, is somewhat weird. I could suppose the aliens wanted to enforce gender roles for some reason or other, but why would they subscribe to a human idea of the "fairer sex"?

The broader political message might be about the weight of our freedoms. It appears to the reader the capping affects humanity quite little, whereas it also rids people of wars and perhaps pollution too, given the medieval lifestyle. Most people are not directly subjected to heavy slavery and appear to be able to play a range of emotions after all. This is a point made in the book, too, as the main character is tempted to live a better position than at home, risking the mission at hand.

Posted by Tero Heikkinen at 20:56 No comments: