I recently co-edited an issue of WiderScreen journal with Markku Reunanen. As the topic is Text Art, this well fits to the theme of "old machinery" too. This new issue features typewriter poetry, teletext-art, ASCII pr0n, PETSCII and numerous other explorations at the intersection of text, technology and image.

What I am pleased about is the number of galleries and creative works that nicely complement the written articles. Somewhat sadly for international audiences, some of the articles are only in Finnish.


Posted by Tero Heikkinen at 08:57 No comments:

It started with setting my Linux Mint/Mate desktop background to what supposedly was the original Workbench blue background color (#0050A0)...

Fast forward a year or so. Then I got around to thinking whether there is an Amiga Topaz truetype font, and of course there is. I also grabbed some Workbench icon graphics for the folders and such. 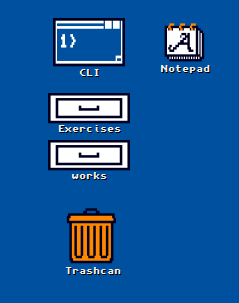 However, the normally scaled Topaz 8x8 font did not give the kind of 640 x 256 feel I was after. The 8x8 font is not inauthentic as such, of course the font would look like that in a high resolution desk.

But I kept looking and I found one version that had the Topaz font stretched to 8x16 proportions.

I found the icons from various sources on the net. Google image search yielded surprisingly few images of the old WB. I have so far combined elements from 1.2 and 1.3, as the latter has some more interesting icons but overall I prefer the 1.2 approach with the flat drawers and clean trashcan.

I could have taken a hard drive icon too, but it looked a bit ugly so I stuck with the disks.

Yes, to me every later WB looks worse. Got to appreciate those bold color choices in the 1980s interfaces...

I grabbed the icons using GIMP, and gave them a transparent background. The blue color is also transparency, so the desktop background would affect the icon colors as it would in the original Amiga.

Here's a snippet of my Linux Mint/Mate desktop: 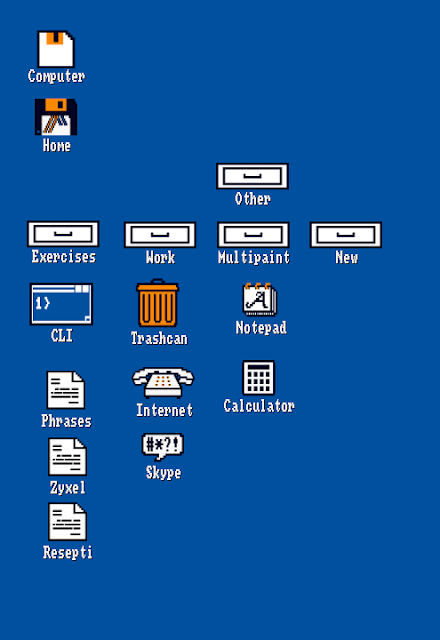 I've been a bit "creative" about where to use whatever kind of icon. Obviously CLI takes me to the terminal and Notepad to the default text editor, but the telephone icon was originally for "Serial". Here it has been appropriated for the Internet browser.

With the legendary "Say" icon, I hesitated to assign it to the Screenreader, even though it would be appropriate. But as it is not something I would ever use, I assigned it to Skype. It would have made more sense to use the Telephone icon for Skype, but then what would I used the Say icon for?

It's a bit sad the icons have to be manually resized, for example copy-pasting a folder does not replicate the size. Apparently it's not easy (read:there's no tickbox for it in the prefs) to get rid of the font shadow on the desktop, so I left it as it is.

I only let this craziness take over the desktop. Changing the folder interiors, menu bars, terminal fonts, the pointer and the windows overall might be possible, but it could hamper the overall experience a bit too much.
Posted by Tero Heikkinen at 08:52 No comments: