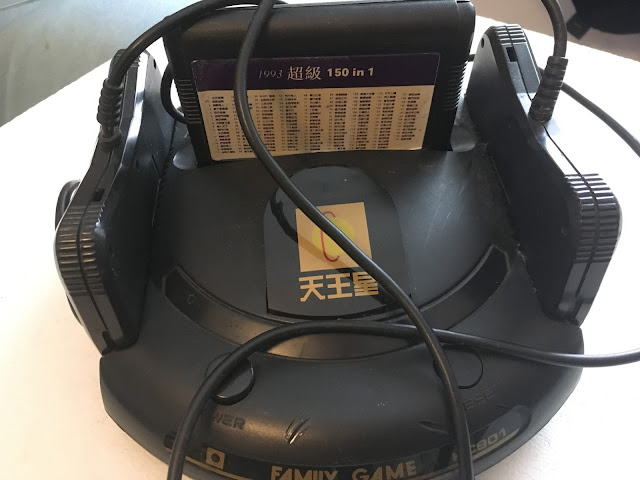 Following a tip-off, I bought this Chinese console from a flea market for 2 euros. It looks vaguely like a Sega Megadrive II but I suspected it was probably a NES clone.

The case is labeled as KC901 Family Game, but I could not find much about it on the internet. I did learn the polarity: tip is minus and the ring is plus. I tried with 9 volts and this appears to be ok. Also, some say the A-V plugs are not really connected so there is only RF. Looking closer at the circuit board this seems to be true, the parts are soldered in but there is no connection!

I stripped the cartridge of it's cover, which had come loose anyway, then went in into the console itself. There's a large "clamp" thingy that helps remove a cartridge with a push of a button.
I removed this and all non-essential parts and tried to connect the device to a TV, but got no picture.

Looking inside, I saw that someone had tried to re-solder a few connections and the RF, and the results are even uglier than my own solders. The circuit board surface had become damaged too.

I removed some with a solder pump, cleaned the connections and tried to get the thing running. Eventually I could get a hold of the picture via antenna, and it's a pretty solid image for an RF.

I also tried whether the internal "video" pin could deliver a signal to the TV video, but although I saw a glimpse of a rolling dark ghost of a screen, this does not seem to be the way to go. If it were so easy, the A-V would probably have been connected.

For some reason I could only get one controller working. Plug them both in and neither works. There's logic inside the controllers, they are not simply a bundle of switches, so a broken controller or a wrong connection might explain this.

But it's enough to see this is a NES clone alright. The 150-in-1 cartridge is even a bigger rip-off than my other 8-bit "Powerstation 64" NES clone, here there are maybe a handful of games with zillion variants with different names.

Possibly the variants have been patched to create some negligible difference, but I could not be bothered to check this. The presence of Duck Hunt and Wild Gunman shows this system has been indeed sold with a light gun, but without one I can't really play them.

Although I'm not 100% certain the 150-in-1 belongs with the console, I think that's the idea. Can't say if a NES clone like this runs real NES cartridges, and if it does, do they need to be Japanese, European or US? No clue.


Posted by Tero Heikkinen at 17:25 No comments: 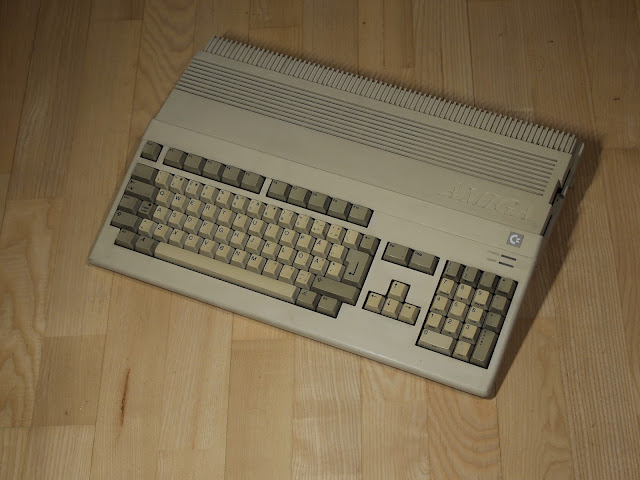 Yes, it's easy to get a bit emotional about the Amiga. Somehow it was possible just to stick in floppies, play games, watch demos, draw with Deluxe Paint, and not care too much about the world. With A500, Workbench appeared great but unnecessary, Amiga BASIC was laughable, Assembler simply could not be learned by mortals. The software sometimes crashed a bit too easily, with that immortal line "Guru Meditation - Software Failure". But you could play minesweeper while your file downloaded from a BBS. There was a speech synthesizer that could be made to utter truths about your brothers. A clockface that could be displayed while there was another window open. Directory Opus. CygnusEd. Multitasking.

Megalo from Wild Copper, and the Deathstar Megademo were some of the earliest material I saw. For me the first demo that showed some kind of consistent styling was Universal Pictures from Unique. Clearly it's not aged that well, and neither has that Miami Vice remix from HCC.

As the 1990s progressed, I learned about demoparties (but did not attend), Scoopex: Mental Hangover, Enigma from Phenomena, Spaceballs: State of the Art and 9 Fingers, 242, Kefrens: Desert Dream and so on and on, and although it was all very grand something had already vanished. Suddenly it was all techno/breakbeat/funk and "design" and by the way aren't the best demos always something you had seen back in the day?

Having an Amiga was bit like enrolling into a media school: I'd learn first hand a bit about graphic design, composing music, sampling sounds, creating animations, 3D-modelling, programming. AMOS Basic teached me something about planning larger programs and writing games but maybe also prevented from learning other languages sooner. I tried my hand in assembler but could only write small subroutines to support the BASIC code.

Emulation really started with Amiga and emulators like ZXAM showed that simpler computers like the ZX Spectrum could run games, although you'd need A1200 speeds to do that. Many hours were spent with revisiting ZX Spectrum classics and also the ones I thought I'd never see in my life.

I'm wondering if the later developments did Amiga much good. Sure it was great to have a hard disk and a faster processor, but PC envy started to hit hard, and the concern was trying to better the PC in it's own game plus some.

PC games like Ultima Underworld and Falcon 3.0 were pretty worrying, but especially Doom seemed like a watershed moment, Amiga had lost the (bouncing) ball. At the same time console games appeared to do that other thing better, too. Doom was eventually ported to Amiga, but then 3D cards entered the scene and eventually homogenized graphics across all platforms.

And that brings me to a difficult point. Although one hears rumors of Amiga's comeback over the years, something about the idea of an Amiga revival seems a bit off. Can the new Amiga now do WWW properly? Javascript and HTML5? Can it play HD video? Can you plug a GPU to it? Can you stick USB devices to it? If not, then it's too off mainstream to gain any real traction. If yes, then it would be a bit similar to any current computer. Perhaps a well thought-out decidedly hobbyist computer built around a specific genealogy of a GPU might represent an "Amiga" these days but don't expect many to buy it.

Thinking it now, the Amiga happened in such a short time. Generously, one could say the overall Amiga phenomenon was relevant for about a decade. But that intense time with the A500, a few summers, really. Maybe it really does get a bit emotional here.
Posted by Tero Heikkinen at 12:56 No comments: