Rewriting Spectrum ROMs on a ZXEvolution/TS-Conf

Here I am exploring another interesting feature of the ZX Evolution, the Z80-based hobby computer that has ZX Spectrum modes. What I'm looking at here is changing the ROMs, as the Evo has a fully re-writable EPROM chip.

Using the ROM burner in Wild Commander file explorer, I can rewrite the ROM with some of the original Psion/Sinclair 16k ROM cartridge binaries. This is quite an interesting prospect for an old Spectrum-head, since these ROMs have been quite hard to get and usually require an Interface 2. Also, ROM burning usually requires some special equipment and boards, but the TS-Conf/Wild Commander makes it very simple.
There are a few 16k games for the Spectrum on the cartridge format. Since Ultimate/Rare has actively discouraged the distribution of their games, Jet Pac, PSSST, Tranz Am and Cookie binaries can be harder to find. This leaves Psion Chess, Backgammon, Hungry Horace, Horace and the Spiders, Planetoids and Space Raiders. The chess and backgammon games are pretty well done for what they are, Horace and the Spiders is nice enough and Space Raiders is a passable Space Invaders rip-off. Planetoids I don't care much about. (Of course, all these games are available on tape.)

I've explained a little bit about using the TS-Conf and Wild Commander here. The Wild Commander is renamed as boot.$c and placed at the card root. Also, a WC folder at the root contains all the plug-ins and the INI file that lists them. Selecting a .ROM file activates the ROM WRITER plug-in, if it is correctly installed.

After picking the ROM file select the block #01. DO NOT use the ROM block #00. I did once, and although the computer nicely boots to the desired ROM, it will not boot into anything else after that! (Thankfully I could flash the T&S firmware and rewrite everything). 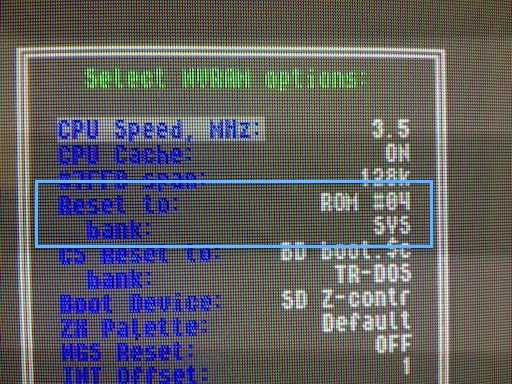 Symbol Shift+F12 returns to the TS Conf frontend. Here, adjust the "Reset to:" into ROM #04 and use the bank SYS. After that, a plain RESET (F12) will activate the ROM.

Edit 2015: The new version of the ROM WRITER makes it possible to write the ROM files into RAM. When the ROM WRITER v0.2 activates, select the last option, RAM #F8.

Then, In the TS-BIOS Setup-utility use parameters Reset To: RAM #F8 and bank:SYS, then reset to run the ROM. Soft reset will not destroy the contents. This is very handy for testing ROMs.

This here page describes efforts to build new ROM cartridges for the Spectrum, plus also the games mentioned above and some prototypes. There are also zx80, zx81 and the Forth-based Jupiter Ace emulators, which all run on the Sinclair Spectrum as ROM cartridges. The 128k versions can be burned on the ZXEvo and they work. They are not 100% compatible with the original computers but it is neat work nevertheless.

Another exciting use for the ROM burner is re-writing or modifying the original Spectrum ROM. For example, there is some free space before the character graphic definitions. (14446-15615) Some code can be positioned there without harming compatibility. There could be utilities, a small machine code monitor, et c. (In the russian ROMs, the TR-DOS might get conflicted, though.)