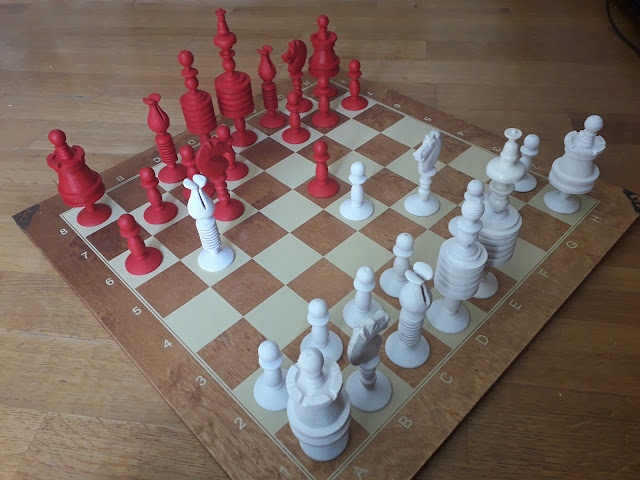 Barleycorn is a common name for a highly ornamented, tall red and white chessmen, elevated on an urn-like pedestal.

One might think the name 'barleycorn' has something to do with the tallness or shape of the pieces, but apparently it refers to the decorative barleycorn leaf motif found on them. So whether a set without the decoration is truly a barleycorn chess set I can't say. But it's a handy keyword for searching a certain type and I'll use the word here loosely to describe mine.

I've longed for something like this, but barleycorns are quite expensive (200 EUR easily for a modest, complete set) so I started thinking whether I somehow could build my own, even if it wouldn't be as decorative.
I don't have a lathe. The main idea was that the pieces could be created by fitting ready-made parts around a central stick, like beads in a string. Visiting a few hobby shops, I looked for ready-made wooden parts that could help in this.

After I discovered a part that would work as the base for all pieces, I was already more optimistic. I felt a larger set would be more forgiving for inaccuracies, so I chose a 35mm base. As barleycorns tend to be placed much more tightly than any FIDE regulations now say,  a 50mm squared board should be good for these.

I didn't give much consideration to finding larger bases for the King and the Queen although it is clearly a feature of the barleycorns and most chess sets.

I bought a bunch of the ready-made wooden parts I could find from hobby shops, trying to figure out how they might be used together.

After having a pool of parts, it was time to scavenge more definite images of barleycorn-type chessmen from the internet. I did not seek to replicate any one set in particular, instead I picked features from different sets that I liked.

Of course it was important that the details could be recreated with my parts pool. It was a relief to find out not all barleycorns are especially decorative and I could take that as a guideline.

I needed to ensure the 16 pawns would not require much manual work. I'm happy to note this stage was quite successful, as the pawns are the simplest part of a barleycorn set in any case.


Each pawn and piece has a narrow stick as a central axis. This meant drilling parts that didn't yet have holes in them. Especially the pedestal part required some care as it's not easy to drill into a convex end.

All the collars needed drilling too, finding the dead center was a bit tricky. The small brittle pieces break easily when drilling. For the tiniest collars I just had to patiently drill 1-millimeter pilot holes before making the 2,5 mm holes.

In the beginning I made many mistakes, often compounding so that some pawns were unacceptable and had to be remade. Poorly supported parts may move as a result of the glue drying process, which I also forgot to check.

I built a drilling jig out of a wooden block which helped in getting the holes more accurate. This became necessary as I noted I really have only so many bases and 32 perfectly drilled bases are needed.

One trouble I had that there really were no parts for inverted curves (e.g. the "scotia" in antique pillars). I emulated these by using a combination of different collar pieces.

With all the easy labor behind me, I begun work on the knight horse-heads. Here wood putty was somewhat useful as the shapes could not be cut very precisely. I was not overtly happy with the knights, but I needed to make progress on this most difficult part before my enthusiasm runs out.
And run out it did. After I finished the four knights and whittled one bishop head, it took a better part of a year before I could find it in me to continue with the set.

With renewed zeal, I sat down and whittled the 3 missing bishop heads and started planning the rooks. Here I drew more accurate sketches, because I had lost the sense of the project and the proportions. The rook designs had been previously unsolved, but I had decided they ought to be elevated. (Less common in barleycorn sets but it has been done).

The drawings were useful in finding the proportions for the rook although in the end I improvised some choices.

I had seen such a tool a while ago and now I bought it. It's meant for cutting holes into drywalls and the like, so the cut-out is not really the intended product. But it worked well enough with the power drill and the 4mm plywood. The resulting edges were somewhat torn, but filing and sanding them together I got them quite smooth in the end.

I tested each plate size to find out what my options are and then redrew a rook design on a millimeter paper using this knowledge. Only the center part would be cut out of the solid blocks. Cutting dozens of plates was a bit boring, but likeable procedure.

With this tool the central drill was 6mm fixed diameter. This was helpful for gluing the plates together around a 6mm drill bit, but as the 6mm hole was not suitable for the narrow central stick, I also needed "converter" parts. I won't explain this in more detail.

I used the plate-approach for creating the royal pieces too. I was unhappy with my earliest ideas (see the first picture) and chose to do a simple straight barrel that probably looks better.

There is something cartoonish about the designs, especially the rooks are very huge, much larger than the base they are standing on. This is not something I've seen in any set, as the rooks usually are not elevated, and when they are they certainly do not exceed the base dimensions. 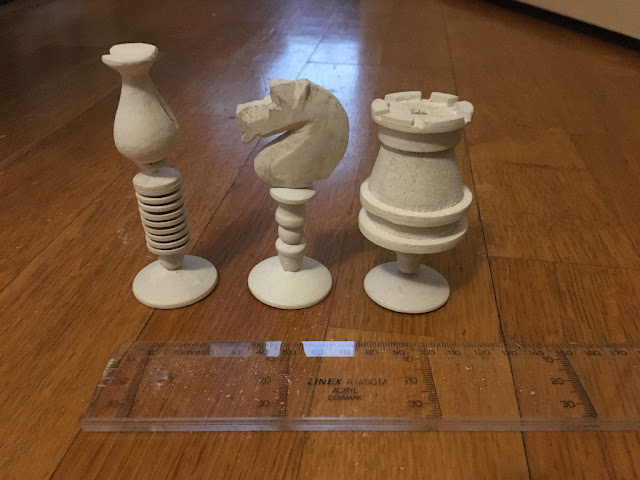 So I could also make some original choices. Possibly I also felt this cartoon approach gives the set more character than a failed attempt at copying some existing design.

I did not plan the whole set before looking at it all together so it was fortunate the pieces work together as well as they do. But even during the process I could match certain pieces to work together, so it was not all done blindly.

The set is not especially heavy. The king and queen are sufficiently weighty, but the pawns and other pieces are somewhat light and unbalanced. I could help that little with leveling the base bottoms a bit.

Small amounts of pieces in plastic bags turned out to be quite expensive in total, so it's very likely I could have instead bought a somewhat battered antique barleycorn set off eBay with the sums! Well, it's more interesting to try to make your own.

There is still some painting to do, and I'll do more close-ups when the finishing has been done.
Posted by Tero Heikkinen at 23:04 No comments: 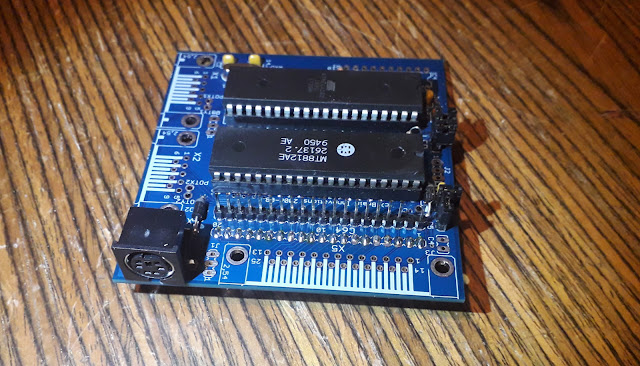 About a year ago, I had a go at rigging an Arduino to work as a PS/2 adapter. That adapter is working, but the software needed patching. I got it into semi-decent state but it still leaves a lot to be desired. (Shift+cursor keys etc work a bit randomly.)

In the meantime, I also ordered this ready-made solution from Retro Innovations, the C=key 3.0A.

Apart from modest soldering skill you will need some sense in building electronics, as the (not included) instructions need some deciphering. But if you follow them step-to-step precisely it should come out good. I guess you can also order them soldered. I perhaps wanted to avoid having the PS/2 connector positioned, but as it turns out it was a better idea to use that part anyway.

The board has provisions for both female & male 20-pin connector. I could have avoided soldering the other part in, had I given it a bit more thought.

Because there was a capacitor in the way, I could not fit the board directly on the C64. So I went for a long-ish drive cable. I once found a bunch of these from a flea market. 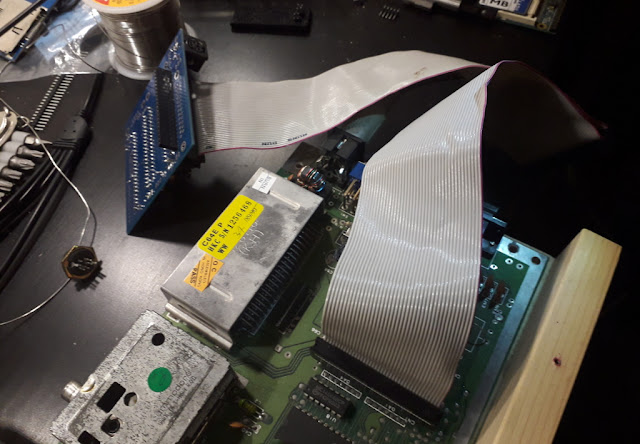 Bonus points for including proper holes in the board for easy attachment in your own projects. I'm not yet sure where I'll use this.

The adapter worked at the first attempt. My impressions were that this is much smoother and bug-free than that DIY board.

But it turns out this C=key adapter is not without problems either.

Although the key mapping felt great at first, I soon found the cursor keys did not work. Then I learned I need to change the keymapping style. I can enter the "menu" by pressing CTRL+ALT+BACKSPACE.

Using selection 1. (C64 Positional) the cursor keys started working and all keys are mapped according to the PC keyboard. ...according to an US keyboard, that is. Sigh! So the keys work but everything is in an alien place.
While testing the keyboard I sometimes came up with gibberish. I also managed to get the adapter locked quite easily, which often followed from pressing Return, but other keys too. Using the CTRL+ALT+BACKSPACE combo a few times the adapter recovered.

The site does say "This is still considered a project, not a complete product. I’ll try to help with issues, but it’s still a work in progress."

I did clean the adapter up and wiggled the cables a bit and got a better response out of it. Who knows, it might be my soldering and construction was a bit botched. I'll have to make sure the board and the cable do not move when pressing the keys. 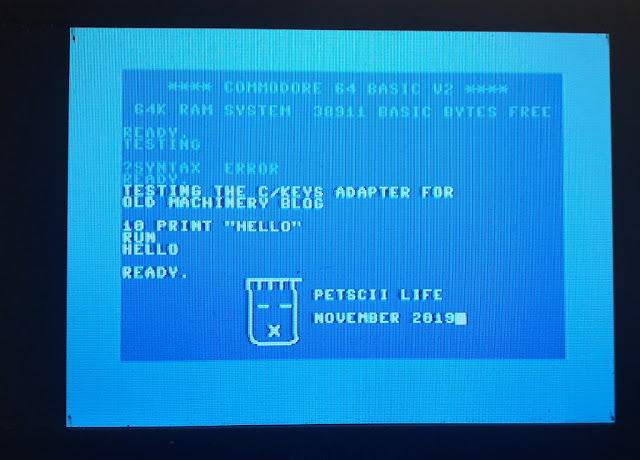 These were of course the very initial responses to this adapter, and further examination should reveal how well it works in the long run. Possibly, a PS/2 to C64 keyboard adapter is a device that simply cannot be made to work 100% reliably and in a satisfying way, but this is already quite good.
Posted by Tero Heikkinen at 10:37 No comments: