Again, I'll have a look at some of my recent 8-bit pictures. 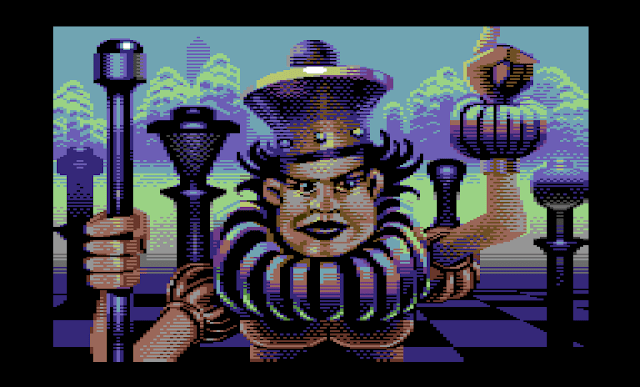 Queen, a multicolour Commodore 64 picture,for the Vammala Party scene compos. What started as an Alice in Wonderland-esque image, was finished quickly with fantasy chesspieces. Made with Multipaint. 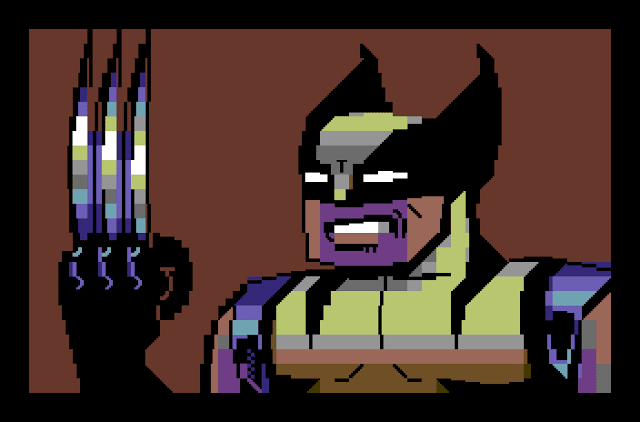 Wolverine, a PETSCII work, also for Vammala Party. Fun to do and using the triangle chars for the costume was no-brainer, but maybe a more active pose would have been impressive. Made with Marq's PETSCII editor. 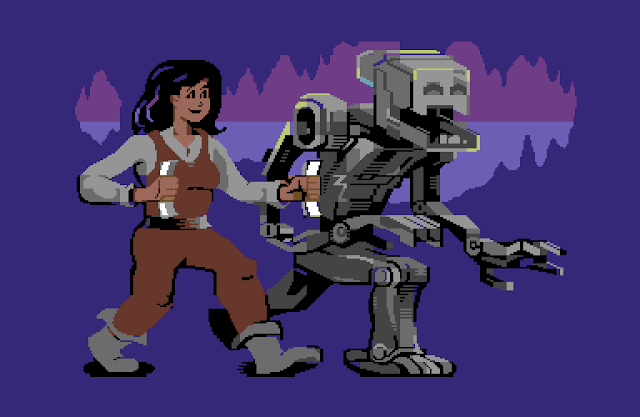 Remote, a, well, remote entry for Gubbdata 2018 graphics compo. Again, made with Multipaint. This turned out simple/nice and has a multicolour vibe to it even though it is a Commodore 64 hires.

Cartoon outlines are not that easy to do on hires and the approach falters at places, but I feel I managed to make it look like it's intentional.

The image started out from trying to recreate a C64 picture I saw in a dream (roll eyes here if you want to) but the end result became something very different. The robot is reminiscent of the robot in Short Circuit, which I watched recently.

Posted by Tero Heikkinen at 15:26 No comments: 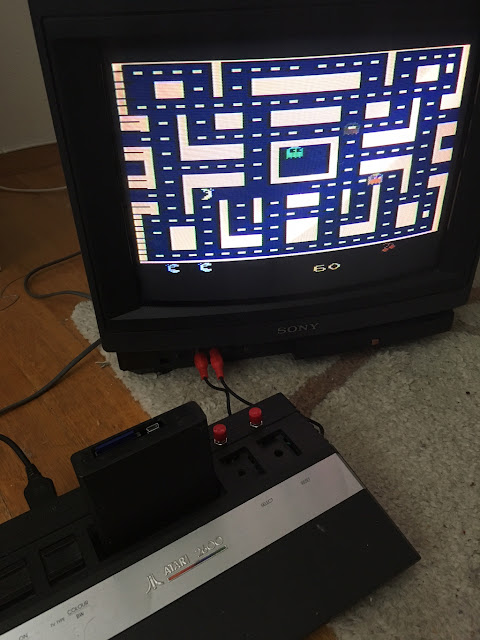 Just think that many Atari 2600 games are now about 40 years old. I believe I encountered Atari 2600 in the summer of 1984. This Jr. version is a later acquisition, I got it alongside a bunch of computers in 2010s.

In the past I had already fixed the select/reset buttons (a common problem in Jr) with crude switches, but avoided doing the composite video mod. Except now.

As Ataris are so popular there are a gazillion mods. I followed the mod from a site that happens to be gone now, but it is pretty much same as here. I simply found my board to be similar and the instructions are very concrete.

The mod features a 100pF ("101") capacitor, I figured that the n10-labeled capacitors in my inventory should suffice, although I haven't seen this notation too often.

(The 'n' denotes both the scale and the position of the comma so 1n0 would be 1,0nF and so on)

I added a tiny board where I imagined all the wires and resistors would go neatly, placing it over the pins that now make up the select/reset switch connectors. The plan fell through and I soldered the resistors directly to the chip as in the site I found. The added board was somewhat helpful for fitting the video cable that goes out of the box.

I cut a couple of grooves to the right side of the case, so the video/audio cables can stick out from there. Having the grooves tight keeps the leads in place. A neater mod would have two proper connectors but I didn't have ones that would have fit. I left the RF connector as it is.

I realized I can't use my previous select/reset switches as they collide with my added board! Not much foresight here I have to admit. Also it reminds me how large the switch boxes can be.

So I removed the crappy switches and added two buttons to the top of the case. I could have removed my additions but I was lazy as usual. The new switches are connected with breadboard jumper cables at least they can be detached easily for removing the case.

I played a bunch of games installed into a Harmony cartridge. But is there something wrong with some of the colors, for example California Games has obviously a wrong palette? But games I know well such as Jungle Hunt and Space Invaders seem to have correct colors so likely it's a software version thing.


So, what to play? My own nostalgia-biased shortlist:

A complete jungle adventure. Few corners have been cut in the conversion, but it does not detract much from the gameplay.

Ok, so it gets monotonous and does not have all the subtleties of the arcade original, but this was my Space Invaders and the first game I played on the Atari 2600.

Ditto here, I kind of dig the chunky big graphics of 2600 conversions compared to the arcade stick figures. Switch on the Evil Otto for more difficulty. 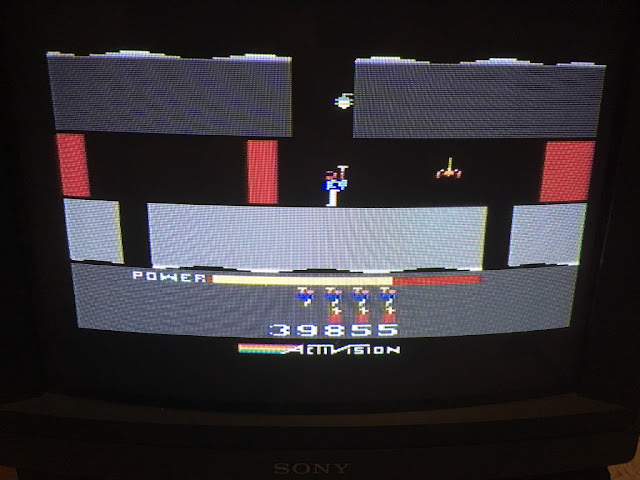 Even if the backgrounds are quite simple, the play appears to be as complete as in any version. Dynamite the walls, shoot the critters, always pick the route with the obstacle. Gets hard around cave 11 or so.

The classic vertical shooting game is nearly fully featured as far as I see. Shoot the bridges, collect the fuel, shoot the fuel. Check the B-switch for proper missile behavior.

Although the Pac-Man conversion has a bad reputation, the sequel delivers. A proper maze and you can even see everything.

This latter-day homebrew conversion by Thomas Jentzsch is amazing and possibly the best game altogether you can get for the Atari 2600. Considering it's one of the better games on the Commodore 64 it's surprising to see it fully functioning here!
Posted by Tero Heikkinen at 08:24 No comments: