Over the years I've seen a bunch of "50 games" type handhelds at supermarkets or department stores. As the games and physical design are always so bland and generic, I've avoided them.

Now I was lured in by a Data East-branded "308 games in one" cheap device that comes in various attractive shapes, notably the horizontal Lynx/Gameboy Advance form and the more obviously Game Boy shaped hand held console. There's also a mini arcade shape that I did not look at twice.

I went for the Gameboy shape for novelty's sake, although to be honest the horizontal form might be better as a controller and for connecting the leads.

Ergonomics to hell, the case has been shaped with "pixel arty" corners, but this matters very little. Designers take note, perhaps this is an indication we've got past that roundening-era of design styling.

The plastic feels a bit flimsy, but the buttons give an adequate response. There's a 5V micro-USB style power connector, AUX out and AV out. The device works on 4 AAA batteries, but the other options sort of sold this to me, even though no cables or batteries were included with the price. (about 30€)

The Data East name is boldly visible on the package, and as their back catalog boasts some really iconic stuff (Burger Time and Bad Dudes vs. Dragonninja) I was prepared to expect at least a good bunch of playable games.

The word "arcade" might mislead you to think these are arcade version of the games, not to speak of the screenshots in the inlay card.

I can't believe that in this day and age I could still get duped by a "wrong platform screenshot". Thanks for making me feel like a child again, but perhaps not the way I expected...!

Yet the shots are made in a way that although built from arcade screens they might arguably represent "game covers" rather than actual gameplay, hence the logo overlays. And it DOES say on the cover, "8 Data East + 300 games", but that "plus" is also quite easy to miss. And it DOES say "8-bit" which should clue in that the games can't be arcade quality.

Let's make it clear: About 95% of the games are simplistic, NES bootlegs or otherwise very poor quality.

On the first page we get Dragon Ninja, Break Thru, Caveman Ninja, Heavy Barrel, Side Pocket, B-Wings, Karate Champ, Burger Time... These are up to the quality of the NES versions of these games, which is to say they are not all that hot but mostly they play well enough.

But after the first couple of pages it goes downhill. So, enjoy the excitement of iconic 8-bit games the likes of Man in Red, Repair Urgently, Speed Man, Unusual Space, Girl, Tactful Monkey, Devildom Doom and so on!


Many of the games are old bootlegs and hacks of licensed games, like Dada is obviously Popeye, Primitive Woman is supposedly a Tom and Jerry game and Sunken Ship is worked from 2005's Titanic, which in turn is a hack of a Tom and Jerry again. Astro Robo To To is Astro Robo Sasa. Aether Kadass is Macross. Sky Invader is Sky Destroyer. These bootlegs can be semi-playable or interesting as such because the game content is kind of there. But I'm wondering how this particular collection of games got to be curated.

There are many scrolling vertical shooters, the best might be F22, with actual power ups, boss fights and varying levels. I guess it is another rework of something else.

I'm prepared to say some might even be filler crap made specifically for this device, varying a base source code to produce simple shooters and jump'n'runners.

Some games have visuals that go beyond NES, like Cut Fruit and Curly Monkey 2, but design-wise, there's not much thought on the gameplay or level design.

Some games are so simple it's harder to fault for what they are, like Horse Racing where you simply duck and jump with the horse. However there's a bunch of boring sprite-shoots-sprite stuff, guy jumping on platforms, or collects stuff falling from heaven, with slight variations and different skins. There's even a digital paper/rock/scissors game, which must be the pinnacle of sadness.

At least one track'n'field-type game has been blown up into a dozen, with javelin, long jump, hurdles etc., even making Breast Stroke and Butterfly Stroke into separate games. Although I have to admit it may be a better idea than try to endure a full decathlon. A panda takes the place of the sportsman, possibly a clue about the country of origin of these games.

Then there are card games and board games such as mah jong, reversi, checkers, sudoku and so on. These can't be overtly blamed if they are simply bootlegs of once commercial games. Sadly there's no chess, though. Other genres are absent too, there's no Tetris or Columns clone for example, and no proper top-down driving game with rotational controls either.

Then there are doubles, that is the same game with different graphics. This is a bit irksome as usually both graphic variants are just as visually uninspiring.

Overall the games boast very mediocre, bland and unimaginative visuals and sounds, while the game titles convey an idea of non-IP-infringing nothingness. It's almost as if I'm witnessing a relic from an alternative universe Earth culture that had strangely failed to invent any of the central video game brands we have.

All in all, the Data East games are probably the most playable of the bunch and Burger Time might indeed be the best game on the entire device.

I took the device to a composite video TV. As I don't have a proper 2,5mm AV cable I used a single tip/sleeve version which produced only a black and white image. Or is the output only B/W? This was enough to show that the device does produce a smooth frame rate for the TV, which is nice. Of course a few of the games give jerky scrolling or flickering sprites due to programming techniques.
A 5V 1A phone recharger cable seems to be sufficient for powering the device (no specs in the manual) so the absence of a cable in the package might be justified. However the 2.5mm TV cables are less often seen.

One annoying thing is the device can't remember the volume setting when returning to the menu. it can remember the menu positions so why it can't keep silent? Wading through the 308 game menu can be tiresome, even if it can be scrolled sideways too.

So, is the My Arcade 8-bit Gaming Pixel Classic any kind of value for money? Despite all the misguidance, I could still be generous and say there are about 30 reasonable quality games in it. Even then 1€ for each might still be a bit too much!

It's a bit sad considering the hardware might be capable of doing justice to the arcade versions of the games, but the conversion job would have been overbearing. I doubt the device is good enough to really emulate the suggested arcade platforms.

Perhaps if the game ROMs can somehow be rewritten, the device might be much more interesting because the physical hardware is OK-ish and the screen and sound quality is not that bad. I am a bit doubtful if anything inside can be easily upgraded, though. Missed potential I'd say.

As I saw the device might be easily opened, I had a peek inside: 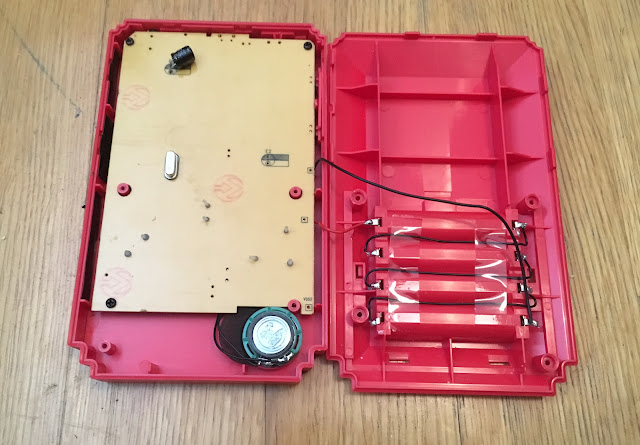 For those interested in subduing the sound, this might be achieved by physically blocking the loudspeaker a bit more. (There are like 2 loud sound levels + silent) 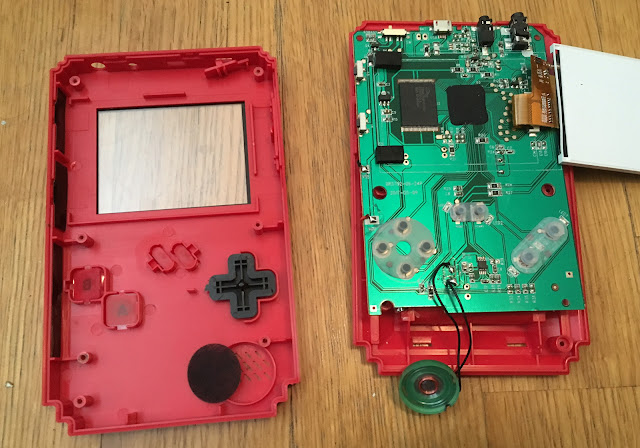 The parts are not especially neatly connected so it was a bit of a bitch to put back together. So I'm probably not going to open it again. 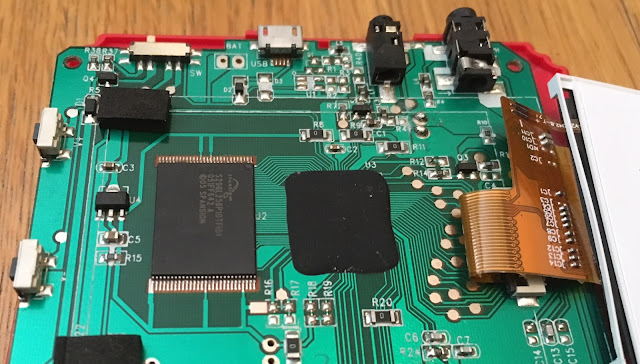 The game ROMs are likely buried inside that alien tar shit thing. (Hmm the SPANSION S29GL256P10TF is memory, though). Putting the screen back, it has to be straightened by hand. Luckily it can be done after the board has been screwed back in. 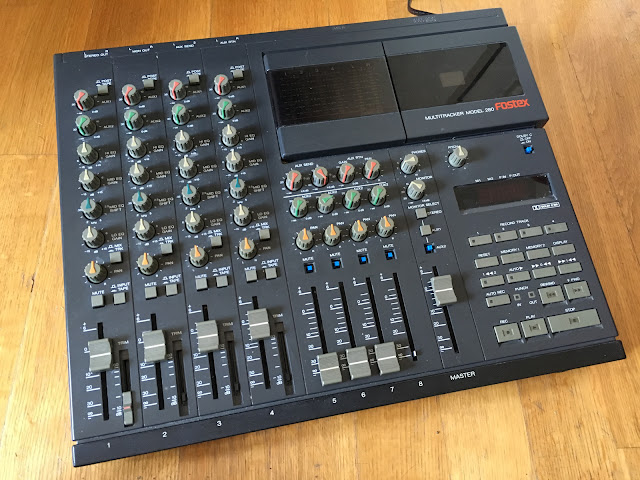 I have had a Fostex 280 (1989) 4-track tape recorder/mixer for about 20 years. I bought it used, around 1998, did some funny stuff with it but then generally forgot about it. At some point I considered it a junk item as the tape recorder had ceased working.

Now I found a 4-track tape with something I'd not heard in 20 years, which gave a motive to look at the device again. Searching the net I was pretty sure the tape recorder belt was faulty, which was also easy to confirm.

Also, I had probably misused the multitracker back in the day, so it might be interesting to record something with a bit better understanding of sound dynamics and a more appropriate cassette type.

The Fostex does 4-track on a C-sized cassette, simply creating four magnetic trails instead of two, using a higher speed than ordinary tapes. The mixer part has 4 main channels with equalization, gain, two AUX buses and various re-routing options. There are also 4 more channels with less options, giving a total of 8.

Channels can be recorded on one track, or stereo-recorded over two tracks at once. Tracks can also be bounced, re-recording for example three tracks onto one, giving more space for new tracks.

The digital control over the 4-tracker is pretty neat, as the tape counter can be set to zero at a convenient point,  and then >>0<< rewinds the tape back to that position. There's also one alternate memorized position that can be used as a loop end position, facilitating loop and auto-record.

Looking at eBay listings, a working Fostex 280, although not super-expensive, is not exactly trash either. Going back the memory lane, I remembered how fun and uncomplicated it was to do a recording without a computer.

As I saw the multitracker was not completely lost, becoming motivated again, I then ordered a replacement belt from eBay and received it in two days. Day later, I had it replaced.

When the belt has disintegrated, the tape deck can't really behave at all. As the Fostex is switched on, it will give a horrible creaking sound and an "E" on the display. Furthermore, the tape head may be left awkwardly in a position that makes it difficult to remove or insert the casing cover or even a cassette.

These are often indicators of a broken belt and replacing the belt got rid of these problems. Listening to my tape was bit of an anticlimax though, but nice experience in a time travel sort of way.

This video by the Youtuber account "3rd island" shows absolutely everything about the process. Without it I might have wasted time or even broken things. I'll recap the main points below:

What makes this fairly simple is that the insides of the Fostex are quite modular and the tape unit is easy to remove.

As I went through the process I soldered back one of the headphone sockets which had come loose. To tell the truth there's a lot of other problems with this multitracker, such as a bit lazy/random rewinding and fast forwarding. Some of the channels have ceased working properly.

I'm wondering if some of these might relate to bad capacitors or similar issues. So, the recording experiments may have to wait for a while. But at least I got my sound out from the 4-track tapes which was enough for now.
Posted by Tero Heikkinen at 11:35 7 comments: