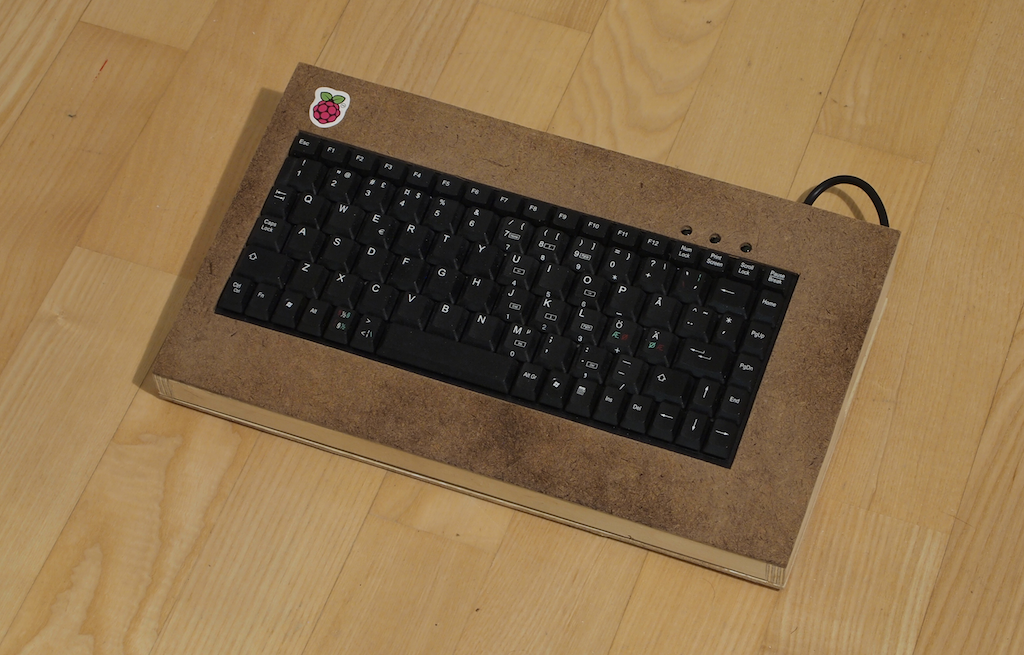 I put my Raspberry Pi 2 inside the chipboard/wooden box that previously hosted the old Raspi version. It's not an ideal switch, partly because of certain layout changes in the new Raspberry.

The new Raspi is in some ways better for this type of corner placement than the old, and with the added USB ports I decided not to connect it to a USB hub. However the microSD connector is now hidden inside the case.

There are now 4 screw positions in the circuit board which is better than the two. The board can be fit very firmly to the case bottom with 3mm machine screws. To fit them I had to drill through the screw holes with a 3mm drill, though. (I don't remember having to do that before)

The USB positioning means the keyboard cable now comes outside from the box and back into the Raspi. I've not had the heart to cut the cable and make some kind of on-board connection. It WOULD have been possible to face the USBs towards the inside just as before, and use the USB hub to pull them out. This would have helpfully exposed the SD card too.

The Network cable output does not need to be extended either. The composite video is not only physically different, it's a bit different to set up in the boot I currently use so I've not connected it to the backside either. Also, it can also be reached from the side of the case.

It's possible that I'll put my old Rasp 1 back into this box and devise something new for the 2B.

Below I have some loose schematics about how the case is built, something that I did not discuss before. The cover that holds the keyboard has the side boards glued into it. The back panel and the case bottom are glued (and screwed) together.

The cover part is removable and connected with machine screws, as shown in the section image below. This is achieved by embedding M3 size nuts into the side panels, leaving room for the screw to penetrate (all this sounds bit rude). A thin veneer glued to the bottom of the side panel holds the nuts in place. The 3mm holes into the veneer have to be made quite carefully. A thicker material could be used as well. 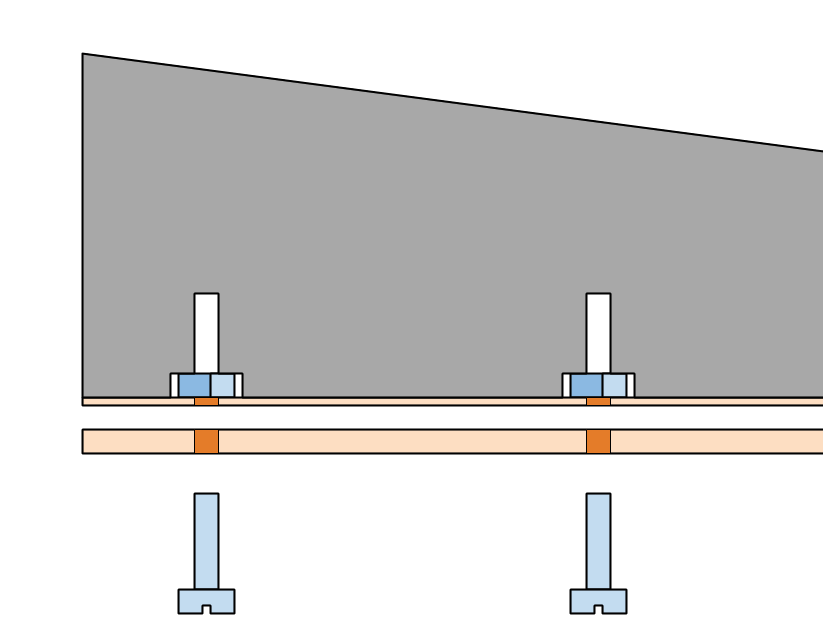 All this because the machine screws/nuts make the cover more replaceable. Wood screws might also suffice, it's not like they would ruin the parts very quickly.

The picture below shows in elevation how the Raspberry Pi is the connected to the bottom panel. This really does not need much explanation. None of the pictures are in any kind of scale, I'm just showing the basic principle. 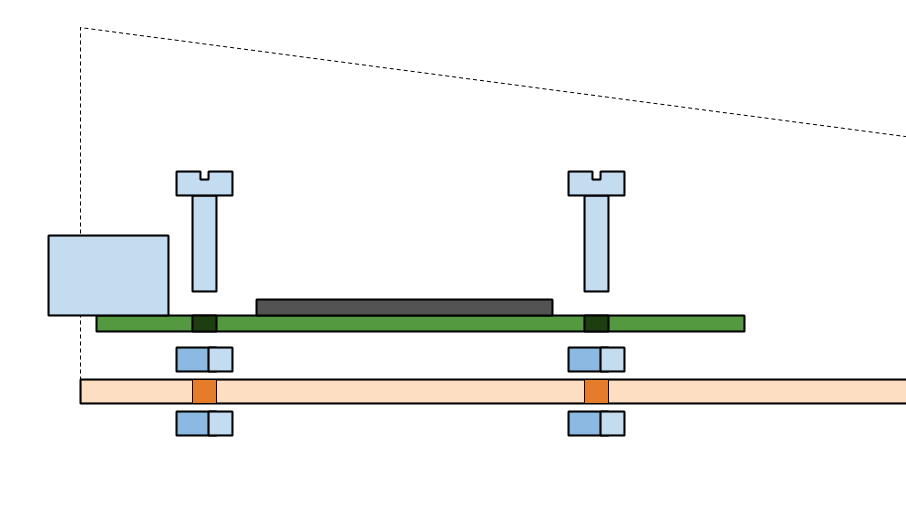 Posted by Tero Heikkinen at 12:44 No comments:

To me, like many others, Ultima IV was one of the best game experiences ever. My first encounter with the game was on the Commodore 64, so I was quite excited to hear that the game has been "remastered"... on the C64!

The new version fits on two disk sides (or one, if you have 1581, or even a cartridge if you have the hardware) instead of the four original floppies. As is often the case with these new releases, they don't play too well with a SD2IEC, the cheapest of floppy replacements (The loading gets stuck to the screen after the trainer selections) However I could "burn" the images to real floppies with D64IT in order to play with the real hardware.

The introduction graphics have been re-made in multicolour graphics by Mermaid, one of the best (if not the best) current C64-graphicians. The images are of high standard and respectful of the originals and the Ultima tradition overall. 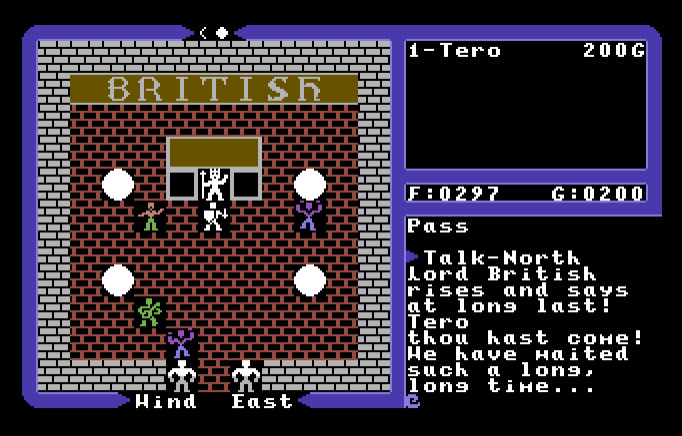 The in-game graphics have been upgraded too, to correspond more closely to the style of Ultima V. Although this might not have been necessary, I feel it has been generally very successful. Only if I'm getting real nit-picky, some of the graphics that could not be brought from Ultima V (e.g. shepherd figure and the like) look a bit incongruous side-to-side with the new ones and would have benefited from some more rethinking. But I can also respect that the graphics have been kept authentic to Ultima where possible.

I haven't played very far so I haven't found any of the enhanced dialogue, besides the inclusion of lower-case/upper-case font which certainly makes the text more readable. 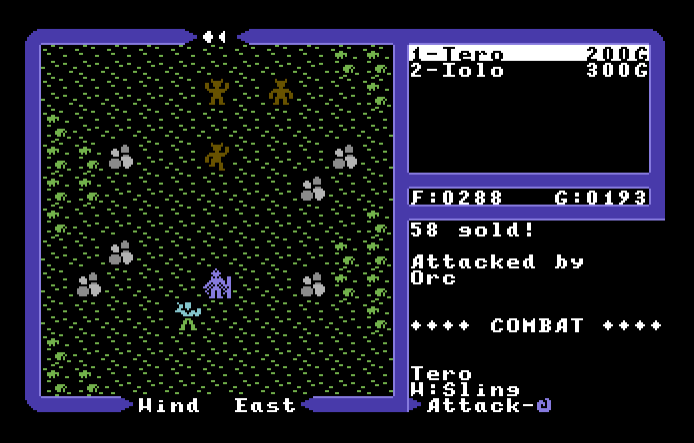 Playing on a real C64 is very slow compared to the hyperfast PC and emulated versions. Especially combat with a large party is a frustrating experience. Perhaps the best addition to the game is the Active Player selection for Combat. With the Active Player, you can simply use one of your characters to kill the stupid critters.

However, even with this improvement, I have to confess I probably can't find it in me to play the C64 version. Perhaps someday someone will rewrite the entire game!

The release features trainer/cheat options, but I would have liked an option to make the game a bit more difficult! The combat in UIV is almost offendingly non-lifethreatening. A crude approach might be to give player HP as LEVEL * 30 rather than LEVEL * 100. Or make the Sling less useful as a weapon, forcing the player to consider melee weapons. It's a hard balance to make but I'd have less battles and more risks involved, something that was done better in UV.

In any case, an amazing release!
Posted by Tero Heikkinen at 14:27 No comments: