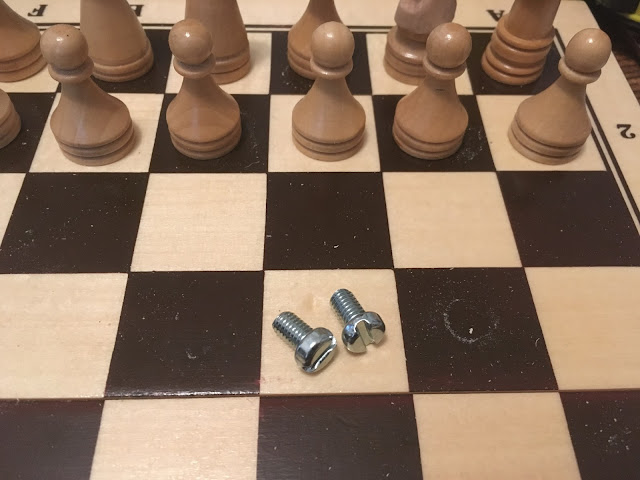 A proper Retrogaming mod: I added weight to my cheap chess set.

This required a lot of boring stuff with a power drill and a crap selection of drill bits.

First I removed the felt, evened the surface a bit and punched entry point markers using a drill tip. Already removing the unevenness and the poor felt the pieces kept more firmly upright.

I then drilled all pilot holes with a thin 2-3mm drill. It would be good to get these straight, but as I did not want to build a setup for this I had to accept some deviation.

Then, 6mm holes. This was maybe the easiest part of the whole drilling process, as the 6mm drill cuts the material pretty easily. The drill needs a tape marker or a limiting piece to avoid drilling too far. I did think I could "feel" my way but after a couple of mistakes I had to attach the tape. A very simple measure that avoids a lot of hassle.

I drilled all 10mm holes using a two-piece jig to hold the piece more firmly, then inserted the screw.

The simple jig only half-does the job, I had to secure the pieces with my other hand. Luckily the piece bottoms are all the same size, not really how it ought to be, but at least this way they all fit the same jig.

The 10mm drilling was quite tough and kludgy to do, I found it useful to switch between reverse and forward gear while drilling.

It would have been much better to drill the 10mm holes before the 6mm ones to preserve the function of the pilot holes. But the 10mm is already a bit tricky with a power drill and the drill head is not the best quality. So I reasoned the 6mm holes could be done first to remove material and make it a bit easier for the 10mm.

I used longer screws for the Kings and Queens so they have a teeny bit more weight to them than the other pieces.

The light bolts do not radically add weight, but it's enough to give a bit of a feel to them. For a while I thought about using some kind of lead pellets, but the screws have less work stages to consider and I already had enough of them. Even if the machine screws do not properly attach to the wood they still stay firmly enough on their own.

I also made some changes to the appearance of the pieces, I'll get back at that when the set is more finished. 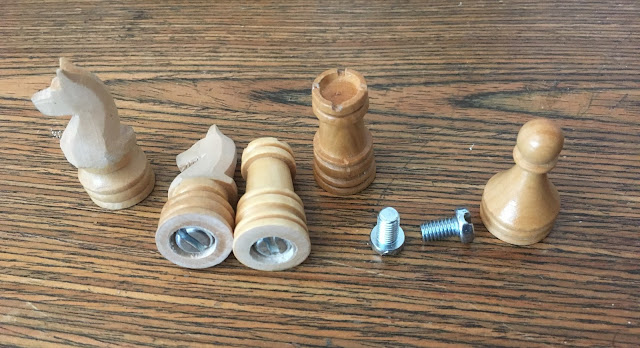 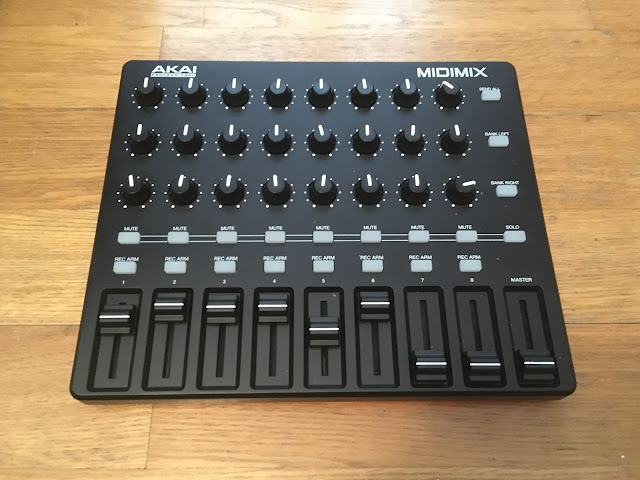 I got this AKAI MIDImix USB controller. It's principally meant for Ableton, like apparently half the stuff nowadays is. My only real interest is to connect it to my computer with the Processing MidiBus library.

Previously I have have been messing with MicroKORGs, Electribe and a Nanokontrol 2, so a controller like this is not a big deal. Compared to synths, the major difference is that the lights can be set independently of the key presses. They even need to be set because the physical button presses only send information about the key press itself and do not change the light state.

I'll look at the Processing midi library a bit and then at the AKAI mapping.

MidiBus is a clever library for Processing that eases the use of MIDI considerably. It handles input, output, program change, control change, raw midi data on multiple channels. Here I'm not going into song player routines, which are a bit tricky but doable. (The Midibus does not have a player).

After installing MidiBus to the Processing install, this will activate it in the source:

The "(this,1,2)" can be adjusted to input and output of the given list of MIDI devices you get from running the sketch.

The MidiBus.list() produces a list to the console with the relevant information. My USB/MIDI interface is an UM1G, and as the AKAI MIDImix works through a separate USB cable (not a MIDI cable) it will be listed as a separate device:


After the Midibus has been set correctly, sending a note is simple:

You need to shut the notes too:

For example, these could be directly inserted within the Processing keyPressed() and keyReleased()events to facilitate a simple MIDI keyboard.

Just as an aside, some devices use NRPN (Non-Registered Parameter Number) for similar things. In such cases the data has to be sent as raw MIDI information. This worked for my Korg Electribe:

The 0xb0 signifies MIDI channel 1, whereas 0xb1 would be 2, and so on. Good manufacturer manuals and datasheets should give Control Change and NRPN values for each device.

But it's also possible to find out the CCs and note values by displaying the incoming MIDI data. The values can shown by adding controllerChange() and noteOn() events to the sketch:

Ok, back to the MIDImix. Physically, the knobs could have been taller, it's not easy to get a good grip of them. Also the faders could have been a bit longer but this is less of a problem. Yet the MIDImix is compact and quite cheap, although not as cheap as a Nanokontrol might be.

The nice thing with these modern controllers is that the data is transmitted through an USB cable and it's also USB-powered, so no power cable / MIDI cable hassle. 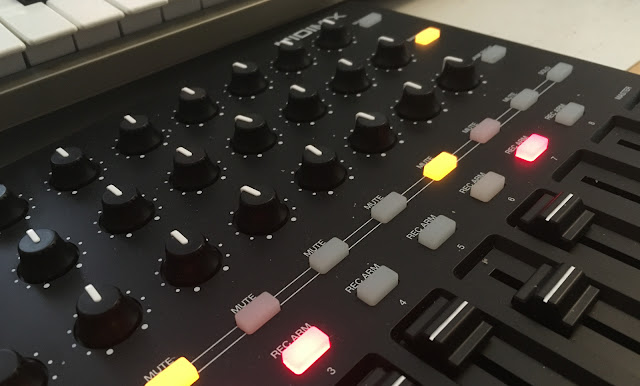 AKAI works on MIDI channel #1, and I didn't see how it could be changed. For the purposes of my tests I simply disconnected the MIDI cable from my UM1G box.

All potentiometer and slider values are Control Change messages with the value 0-127 with them.
The buttons are "keys" that send a velocity of 127 with them.

*) Holding down the "SOLO" key shows the individual SOLO status for each channel instead of the MUTEs. So, sending a SOLO light change only shows up if the "SOLO" key is held. In other MIDImix devices there may even be separate lights for the SOLOs. Pressing the "SOLO" key does send a note value, though.

Pressing SEND ALL will cause the MIDImix to send all the above values in succession. This key also may not have a LED in it. 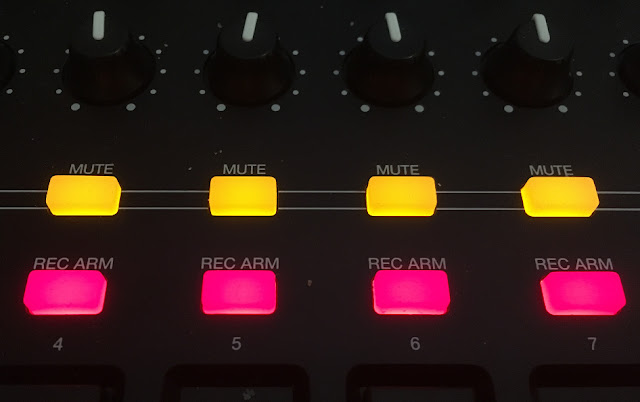 Posted by Tero Heikkinen at 22:29 No comments: 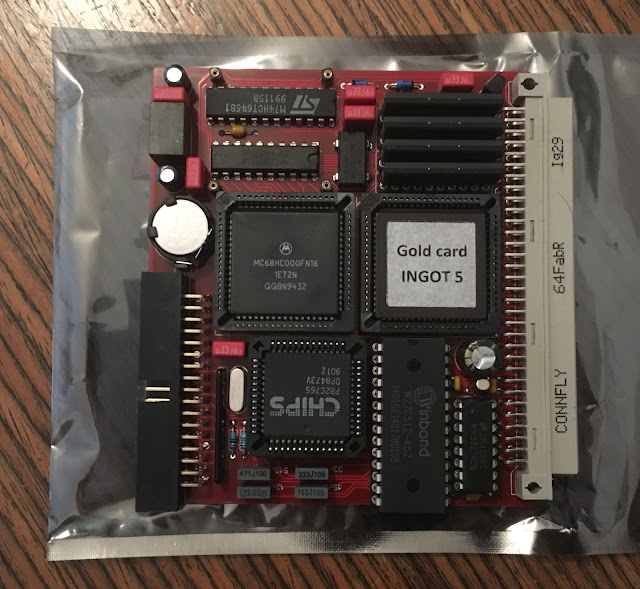 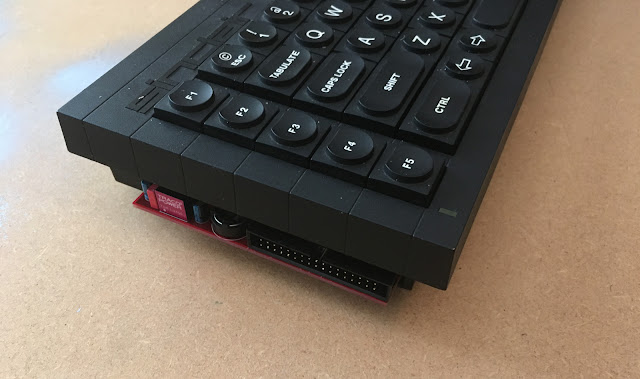 But what about the Miracle Card Clone in this day and age? Because the card has a processor, memory and a disk interface, maybe Tetroid might clone a full computer, integrate the (Super) Gold Card and fit it all inside original QL case and connectors? That would be wonderful.
Posted by Tero Heikkinen at 10:10 No comments: