Ok, the usual year recap thingy, biased towards the retro/c64/scifi side of things.

I've been strangely worried about being less "productive" when it comes to things like PETSCII or bitmap graphics. But all in all I did quite a lot of other things. For example, I released the C64 game Leilei Relay, even if this was mostly coded in 2020.

The working title was Uranus Lander (cf. Jupiter Lander), and I really did intend to make a PETSCII one-screener out of it.

Then I got into vertical scrolling, character graphics, smooth sprite animation... This way the project grew in size.

Although I have worked on a new Multipaint version from time to time, there is no hurry and for once the program seems to work across platforms without too many bugs, so why not have a little vacation. Well, no, I did work on it but the internal overhaul is so large that it's not going to be seen out soon.

With re_monument, I did go public with the first "demo-something" intended for more modern computers. This was outed at the Vammala Party. The code was originally p5.js browser-friendly, but eventually put into Processing/Java to get the music working more easily. The music was put together with my weird MIDI-setup and the software I may eventually open up more.

Also, I put a lot of attention on Amiga and Raspberry Pi at the first half of 2021, but stopped working on that. I'll see if I can pick up some of the things next year.

Electric kickbikes (or "scooters") became a new blog theme, first starting with the Voi rentals and eventually getting my own. It's one idea for steering my mind away from sitting in front of a computer both at work and at home. Sadly the weather's not currently very good for riding.

It looks I got to play a lot of games though.

2020 was the year of Steam/Proton, but this year I've also added Geforce Now streaming service to my arsenal. With some luck, it's possible to collect games to Steam and Epic and stream them using this service, without having to use your own hard disk space for installing.

Recently I played through last year's Cyberpunk 2077. Despite all the bloated early hype, it's a decent fairly linear story-driven game. Many in-game technologies that looked like dynamic gameplay elements in the trailers are more like skin. Granted, it might reward more in-depth play and optimizing the character's cyber implants.

Having said that, the hacking elements are rather nicely done and do not distract too much from the other gameplay. Still, it looked the fastest way to play through was to emphasize gun skills and damage hacks, then shoot everything to pieces.

Plague Tale: Innocence was on the table too, but had to give up halfway because of stressful gameplay. Likewise Shadow of the Tomb Raider was eventually (digitally) shelved. These games are not duds but simply did not click with me now. Reventure took a surprising 16-hour chunk to play "through".

I also got round to playing Fortnite, only to find it's not that inspiring to sneak around for 20 minutes and then end up killed by the first person you meet. Somehow surviv.io had already shown a better format to me. I can still understand the appeal of the game.

Talking of surviv.io, I might have continued playing, but the numerous problems with logging in, and apparent disregard for the browser version began to demotivate me. Not that many play it currently, it seems.

Proton has continued to be useful. I had quite an educational streak of fps games with the remastered Quake, Black Mesa (Half-Life 1 remake), Halo: Master Chief Collection, and replaying Half-Life 2 once again.

Chess is still on the playlist, but the lessened playtime begins to show in the ratings. It may also be the average opponent at Lichess has become better, what with the surge in popularity of chess in general. But in any case, a vicious circle of not playing may be complete as it's not fun to see the rating drop. Yet, if the only remaining motive to play is the rating, then it may be worth reconsidering whether to continue playing at all. I'll still give it a chance when a suitable moment comes.

Instead of a full season there was a Doctor Who 6-parter called Flux. On one hand it was a bold experiment with disjointed story-telling, but on other hand it also suffered from the format, cramming in ideas that would have been more suitable for a full season arc.

The show has been best when the stories have been more muted and given some time to build-up, so of course everything had to be extremely amped-up, spliced and shifting gears rapidly.

Sure, Doctor saves the Earth and the Universe routinely in the season finales, an in-joke at this point, but now everything was hoovered back to the good old status quo in the most rapid and CGI-laden way possible. Plus a couple of genocides here and there.

Ok, it was actually unclear what's the state of the universe(s) now. We'll see. There's a couple of specials to come, but rumours also abound of cancelling or switching ownership of the whole series.

Sisyphus: The Myth, was initially promising but a very un-even time travel scifi show. Lost in Space ended in a decent way, but it never quite captured the concept of the original, of, you know, actually being "lost in space". Except maybe as the final punchline of the final episode. The not so great Another Life also ended, improving somewhat from the first season.

Lucifer has not that much to do with Neil Gaiman's world from which it originates, but it has been a fun and competently done series. Likewise Dirk Gently's Holistic Detective Agency americanized the original concept a lot but was still nice while it lasted.

As for books, the most important was Liu Cixin and the trilogy of The Three-Body Problem, The Dark Forest and Death's End. (Curiously, the Finnish version of Death's End would be "Death is Eternal") It's a somewhat "post-modern" take on classic science fiction, and despite being "non-western" it's very aware of Clarke, Asimov and the like. Although working in this classical hard science fiction frame, it is comparatively pessimistic and to extent even nihilistic.

I read William Gibson's sprawl trilogy in very early 1990s, but have not really paid much attention to his later works. Now I've been going through the 1990s "bridge trilogy" of Virtual Light, Idoru and All Tomorrow's Parties.

Posted by Tero Heikkinen at 14:31 No comments: 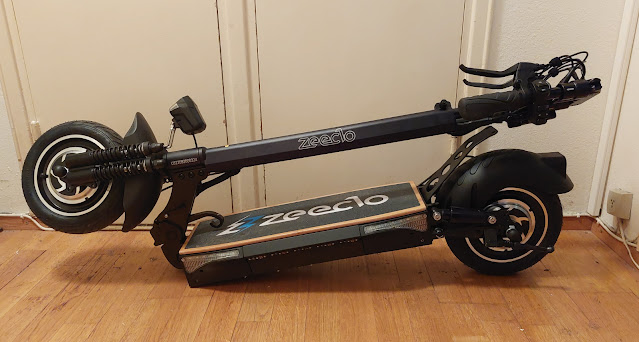 As it gets somewhat trickier to drive this in the sub-zero temperatures and icy paths, it is perhaps the moment to take the Zeeclo Fenix to the garage.

What is inside the box? 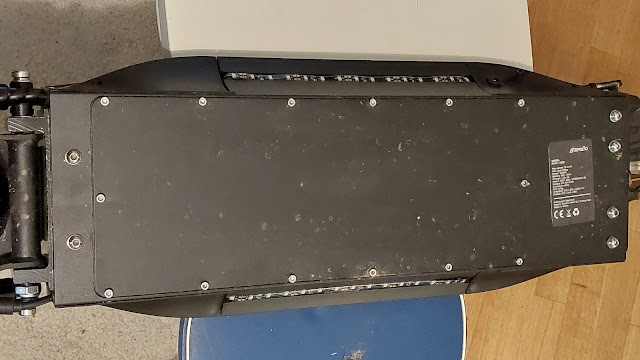 The scoot has been folded and placed upside down on top of two chairs, so the folded stem fits between them.

The bottom panel was easy to remove, there are 14 hex/Allen screws.

The inside is a curved-corner container with the battery pack, controller boxes and a huge spaghetti of cables. 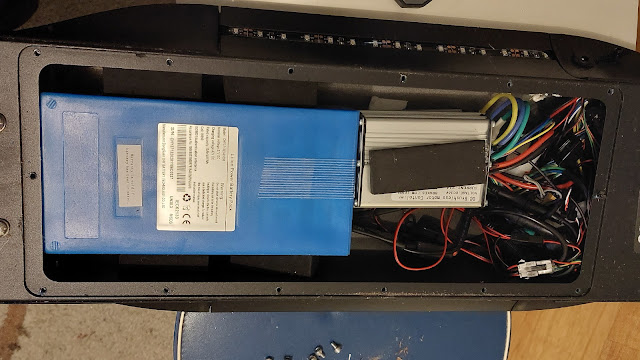 Not shown is the inside of the removed panel, which also holds two more of those foam rubber bricks. It is yet unclear if there is something else than glued foam rubber holding those elements in place, because otherwise everything is simply lying on that bottom panel.

The front end after the cables is empty space, no more boxes there.

Among the spaghetti there's the grey cable loop that I understand is the speed limiter, forcing the 25km/h maximum speed. In Finland, this makes the electronic kickbike equal to a bicycle in the eyes of the law.

I've read some differing information about the true maximum speed, which might be 35 or 40km/h. 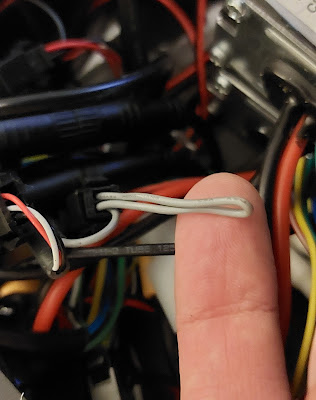 The battery pack certainly takes the most space. While it looks that a slightly larger pack would fit inside, I'm not sure if it would be worth the trouble. The vehicle is heavy as it is. 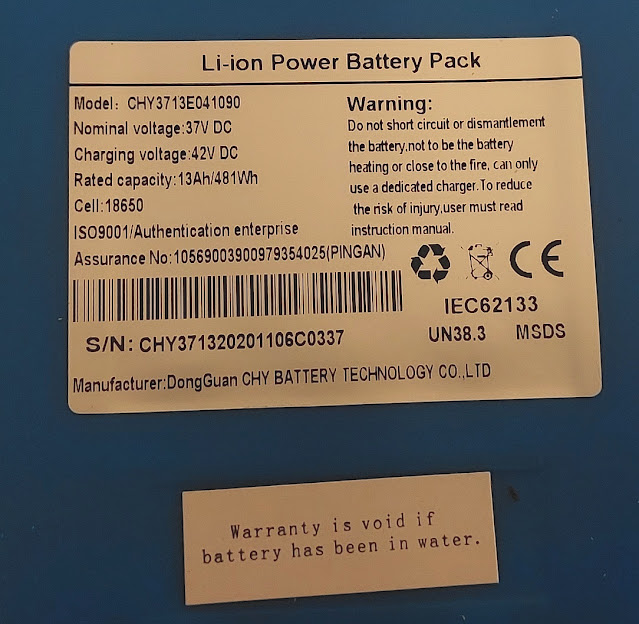 The amount of typos here do not really build my confidence about the quality assurances and certifications, but this alone isn't a reason to think the battery would be fake.

The ~20x10x7cm blue box contains the battery pack with this information:

Googling the "model" or a fragment of that code did not give meaningful results. Should I need a replacement, it might be not as simple to find as I thought. The DongGuan site did not have the exact model either.

18650 means the pack uses the 18x65mm cells, commonly used in electric bike and car battery packs. A 6x11 matrix of these could theoretically fit into this pack, but after peering through with a small flashlight it looks there are 5x10 cells. 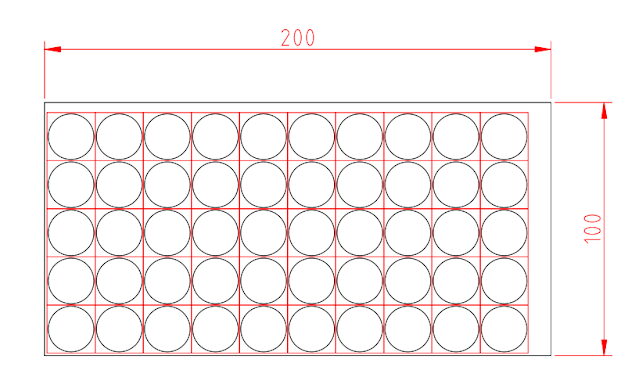 Some high-level math suggests that 10 x 3.6V cells need to be in series to get at 36V. I'm thinking each odd column is upside-down in relation to each even column, as I've seen photos of comparable products do that. But this is something I couldn't see directly.

I didn't take the battery pack out now, but it shouldn't be hard to guesstimate how much the ~20x10x7cm pack could weigh:

There's a website that talks of fake 18650 batteries: https://www.instructables.com/How-to-know-a-fake-18650-battery/

If the battery pack weighs less than 2kg total there might be reason to worry, but even if it weighed more it's no guarantee of best possible quality.

This also shows that the battery makes for less than 10% of the scoot's weight (27kg).

There are two controller boxes on top of each other, and I'm now just assuming they are similar, possibly because there are two motors. At least they have the same cables coming out of them. However it looks it says "dual motor" on one, so why wasn't one enough? 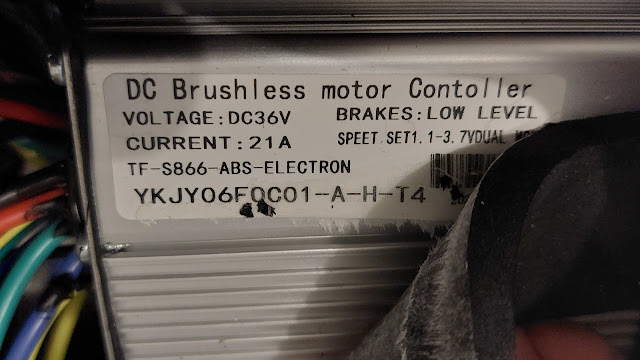 Although the brakes are physical disc brakes, the levers need to override the motors, so the levers also work as a kind of clutch. This is likely the reason why the controller needs to address brakes too.

I had to tear away some of the foam rubber to see the full text, typos and all:

Again the codes were not that useful for finding an exact make, but the "S866" at least is a clue this plays together with the S866 display. Looking at webstores the S866 is often sold with a similar-looking controller box.

The code might actually be YKYJ06F0C01 and not "YKJY..." but that doesn't give many results either.

There are so many typos in the texts I'm unsure if the information is correct in the first place.

While at it, I looked at the deck sides and pulled out one of the indicator light plastic housings. 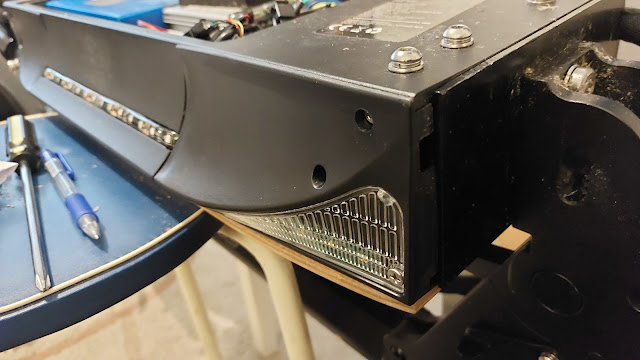 This was again simple to do and revealed it should be easy to remove these decorative elements. 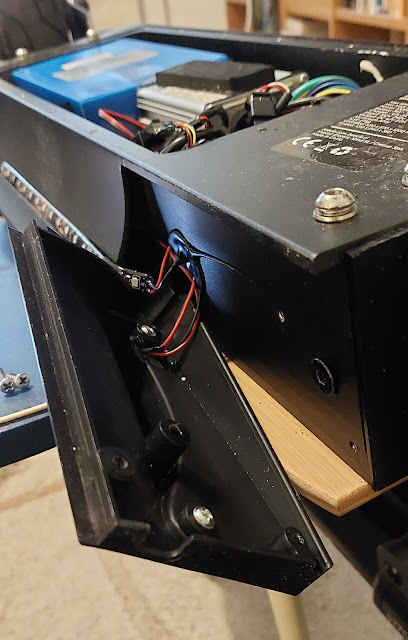 Now if the deck and all these were removed I'd get a nice-looking black box, but I'd also have to take care of all the openings so that water and dirt don't get in. There's some black gunk that both keeps the wires in place and prevents water from getting in.

I also took the opportunity to check the wooden deck and how it might be removed.

I was afraid the deck might just be brutally glued in, but this isn't the case. Feeling around the "sandpaper" with my fingers, I discovered spots where it gave in, just a little, indicating there are bolts underneath. 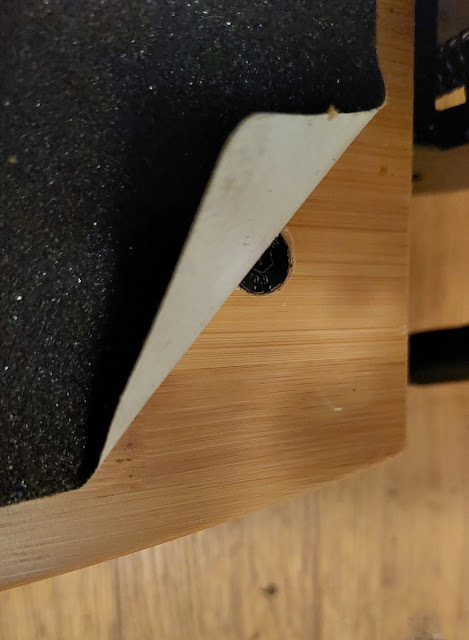 The surface is probably skateboard grip tape. Pulling one corner out, the bolt could be seen, but I didn't pull it out more as this ruins the look of the surface. Perhaps after I get a replacement grip tape I can experiment more.

The deck looks like some bamboo variety, this might weigh 500 grams or even less, not very significant. The plastic decorative parts also weigh almost next to nothing.

Removing the wooden part could make the deck 8mm lower. But I'll still have to see if the wooden piece is there for a good reason or not.

Posted by Tero Heikkinen at 17:28 No comments: