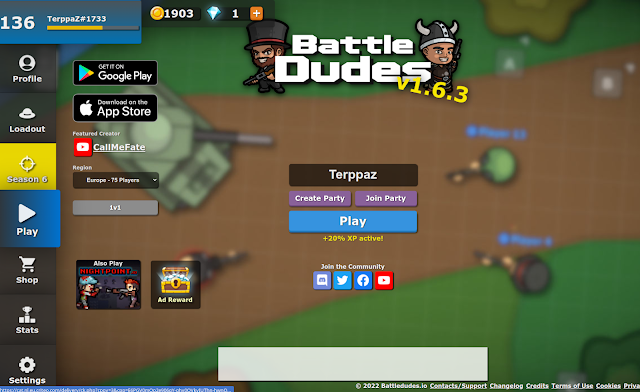 Now that surviv.io from browser doesn't work well (can rarely get in a game) I went to play Battledudes.io instead, another browser-based 2D top-down shooting game.

The 'dudes seems to owe a lot to surviv.io. The major difference is that the players respawn to the same game, whereas if you die in surviv you will have to enter a new game. Secondly, nearly all game modes are 2-team modes and there are strictly speaking no squad modes.

Another difference is that there is no diminishing play area in Battledudes. Altogether the game is modeled more on old-fashioned deathmatches rather than the PUBG/Fortnite mold. There are modes such as Team Deathmatch, Capture the Flag, Control Points, Hardpoint and so on. 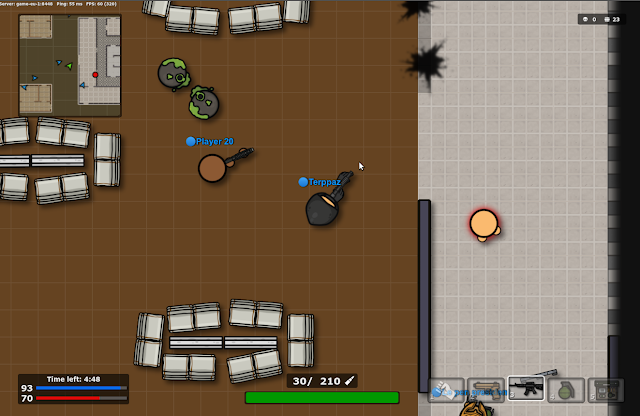 The respawning system also means there's no real inventory. Kill someone and their stuff won't be visible on the ground. Instead there's a loadout which always includes handgun, main weapon, secondary weapon, item and two different perks. You get more options through leveling up.

If you get wounded, soon after the health will replenish. Timing your reloads and healing pauses is integral to mastering the game. There are also perks that affect these elements.

The nice thing here is that nobody can find a super-weapon or super-armor. In Surviv this means that good players tended to be doubly good: both in skills and knowing how to get better weapons. Here if your loadout is crap you can continue adjusting it. That's not to say there aren't some combinations that may be better than others. 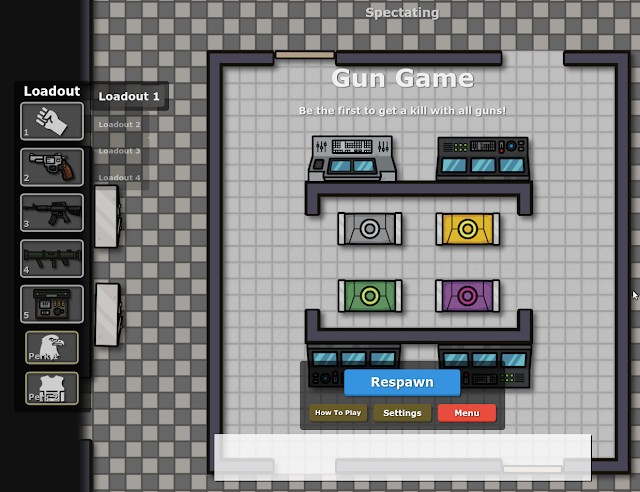 My current go-to perks are kevlar armor and +12% damage. This usually ensures that if two lamers with comparable weapons try to brute force it out, I'll win unless they have the same perks. I've also tried additional speed and visibility range, the latter can be useful for open areas. Some of the pro players seem to favor dodge and added speed, and this can indeed change the 1 vs. 1 situations.

Interestingly, everything on the battlefield can be destroyed. This doesn't reveal items but adds character to the battles and also important route-creation at some situations.

A major addition compared to surviv.io are the vehicles, such as jeeps, ATVs and tanks. These make for more nuanced situations, as players can move other players quickly over the map. I'm somewhat annoyed that the vehicles run over water just as simply as over any other terrain. 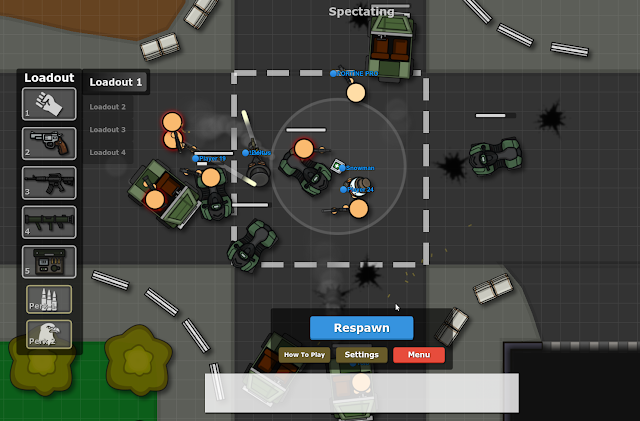 The bazooka is the handy secondary weapon for destroying vehicles. Grenades may be more useful in game modes that don't have the vehicles. They are effective in games where teams guard small areas, and in Payload it's crucial.

Despite vehicles and some added variety I could still say 'dudes is simpler game than surviv.io. The surviv.io 50 vs. 50 battles can be glorious, if there are enough players that is. The map items, bunkers and other special occasions add flavor to the game. The no-respawn rule gives more tension to the game.

When I started, Battledudes was not yet riddled with too-good players or cheaters. Now it looks unlikely I could win any solo gamemodes. As most of the gameplay forms are teams this aspect gets evened out. But team victories and losses can mean less and can often be attributed to luck.

Sometimes good players can be identified by the skin they are wearing, but not always. (Skins are bought with the in-game currencies) As soon as I donned the ninja costume the games seemed to become more difficult! It may be beneficial to look like more of a noob than you actually are.

What I've liked here is that suppressive fire works rather well; shooting at a doorway or at a corner often has a clear preventive effect. In Surviv.io, I've felt there are less opportunities for this even in 50v50, as well-equipped and bold opponents can usually work around the bullet hail. 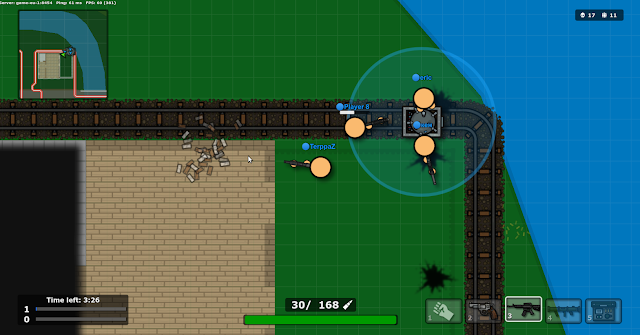 I often use the mini-map to direct fire at off-screen targets. In other cases supporting crossfire or from flank towards the guessed enemy direction can be helpful. In collective battles this can contribute, even if you can't see the enemy! Whether mini-maps are good for gameplay is another matter.

The idea of suppression and other nuances are often lost to the inexperienced players who just want to be that individualistic "pro", swirling around enemies and going for the maximum kills and a good kill/death ratio. Having a real "pro" in your team is of course desirable.

Those who play as coordinated teams may overcome numbers of poor opponents by working tightly together and using varied weapons. Against such a force, there's usually nothing to be done and the battle will be lost.

It can then feel that winning and losing is matter of who is on-line, but on some rare occasions it can give a satisfying feeling that my actions were important in settling the outcome. In Capture the Flag this can be quite crucial. 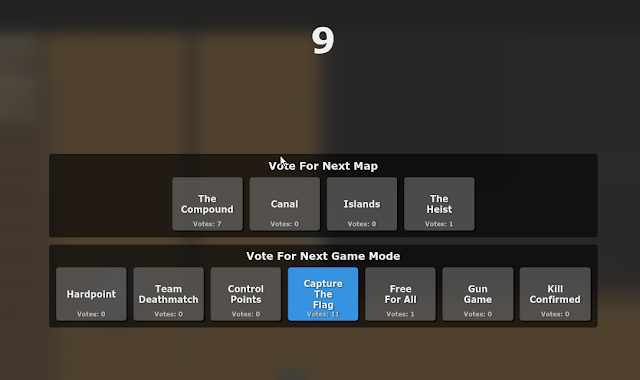 Lot of players insist on voting for the rather boring solo modes Gun Game and Free for All. The somewhat flawed Payload is probably the most interesting mode, but it rarely gets voted.

In Payload, one team has to push a cart on rails that zig-zags across the map to a deployment location. Get it there within the time limit and it's victory, otherwise not.

If there's one friendly team member near the cart and no enemies inside this zone, the cart will move forward. At times I've felt it is impossible to prevent the deployment from happening, but it has been done. A play style has evolved where teams lob grenades to the cart area and others try to kill the cart pushers from distance. 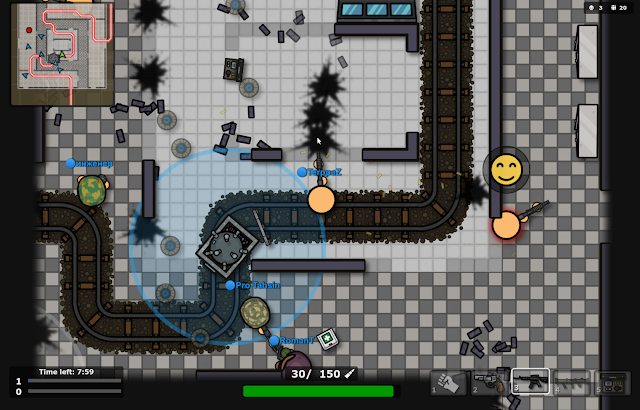 The dynamic is that being too close to the cart is harmful, but staying too far away the teams can't move towards their goal. Sadly, putting obstacles in front of the cart is a waste of time, the cart doesn't really care.

All in all I've felt Battledudes to be quite a robust online game. The developers appear to have not ruined it with superfluous stuff or season frivolities. Bug fixes have addressed relevant bugs. For instance, there were means to exploit the vehicles for "infinite" speed but this was soon repaired.

It remains to be seen how long Battledudes will be my go-to game for a few minutes of mindless instant gratification, but as long as surviv.io doesn't work properly and there are no better alternatives so be it.

The 7th season brought in the game mode Upload, where the team who gets to carry the flag longest, wins. This does move the dynamic of the battle around, however exploiting edges and corners of the map isn't that interesting.

There's a new device called the Trophy System, which creates a grenade-repelling field around the device. In theory this could adjust the balance in game modes where grenade-lobbing has become the go-to strategy, but it yet remains to be seen how useful it is.

I've also noted it's not always possible to drive a car, is it so that the flag-bearer can no longer use the vehicles?

I also saw a few glitches introduced, the payload destination graphic has been messed up.

Oh, and the game mode voting system has been changed so you don't see who votes what until near the end. But I'm thinking this just means I have to suffer the crap solo modes more often.

Posted by Tero Heikkinen at 10:14 No comments: