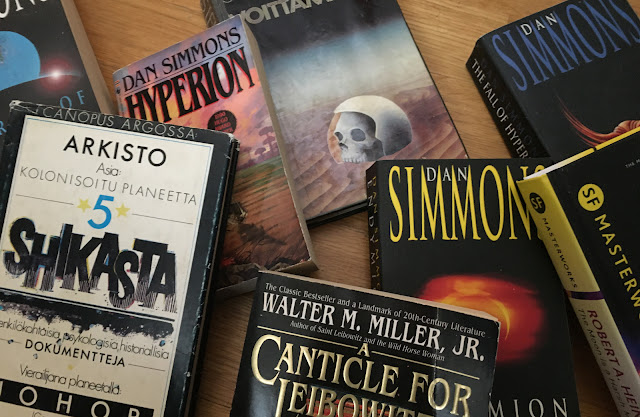 Again, a round-up of science fiction I read in recent times.

Heinlein attempts to mix elements from famous revolutions in this story about the Moon colony uprising against Earth governance.

Despite compositing elements from various historical contexts, the views are strongly on favor of a free-market economy, no taxation, individual rights to the point no one is an appointed judge or a lawyer by trade. If you don't anything useful, you die, that's harsh. Well, it might be a true observation about a moon colony.

It is an enjoyable story, but in my opinion suffers from Heinlein's basic mistake of overloading all the discussions with tidbits and ideas on how to govern and rule, what is a good society or not, who is a worthy individual and so on and on.
How can Moon threaten Earth? The catapults are used to deliver cargo, but they also act as deadly weapons.

One of the more interesting parts of the story is the sentient computer Mike, residing on the moon. One day he simply becomes aware and the main character, a troubleshooter called to fix the computer, is the only one who knows this. He gets to benefit from this greatly. In fact the computer is bit of a constantly presiding deus ex machina (literally) without which the revolution would have no chance at succeeding at all.

The role-playing game Paranoia is likely influenced a lot by this scenario. The game setting was a dystopian future with all-pervasive computer who is your friend. The players were "troubleshooters" much as Man is, and all belong to a secret society (e.g. the discussion on optimal "cell" structure of a conspiracy).

2300AD RPG also refers to Tanstaafl, the setting with realistic planetside-interplanetary politics and corporations plays in it too, although it is more diverse and generic sci-fi, with Clarke and Asimov in its genes.

Invincible lands on a harsh, unremarkable planet with a mission to discover what happened to the lost sister ship, Condor. The ship's not that hard to find but what the hell happened to the crew?

The atmosphere is that of horror without intent on being in the horror genre, and the beginning is already reminiscent of later films like Alien. As the mystery unfolds, the Invincible crew seeks to address the ominous, vague threat, while performing under the somewhat unbalanced command.

The characterizations may seem thin but I also felt the people were quite successfully painted in with minimal strokes. Having the spaceship discipline work much like an old-timey naval operation, works. It also makes this minimalism more relatable.

This book is willing to explain and open up the mystery and the psychological doors a bit more than, say, Solaris, a more complex work. The suspense and dread are distributed in addictive doses.

What I felt was one of the more recent works here... yet it's already 30 years old! I never felt that 1990s was a particularly great time for sci-fi, but looking at this I may have been wrong.

The first book, Hyperion is somewhat muddy, what with the constant bombardment of post-modern references and the lack of an actual story progression. Perhaps somewhat in spite of these intentions, I've found the structure to be more admirable than the surface. Hyperion's and Earth's history, and the galactic political situation becomes peeled through the stories. The later stories bring in explanations to earlier details and give further interpretations to the pilgrims' identities within the earlier stories.

The greatest mystery of course is what are the Time Tombs and what is the Shrike?

I picked the Fall of Hyperion and the Endymion/Rise of Endymion sequels at one go, so I had a rare opportunity to read a series in its entirety. Whereas Fall of Hyperion concludes the story, it also rehashes and repeats a lot of the first novel.

I may have even preferred the Endymion sequels to some extent, as it goes on with a more rollicking road-trip story format. Admittedly Simmons clears away any mystery that was present after concluding the Hyperion.

Concentrating on the single main character instead of the ensemble cast, although refreshing, is not without problems either. Simmons seems to have tried to make a hero that is less scholarly and worldly than the Hyperion pilgrims, but as the story progresses he turns out to be quite the know-it-all.

An early post-holocaust novel. After a nuclear war, a community of catholic monks have the only handle on technology and electronics after a wave of anti-intellectual and anti-technical sentiment has bashed everything to non-existence. Not that this handle is much to speak of, as they merely preserve and copy extant documents about technology, with no understanding of how to produce anything new.

A discovery of a fallout shelter with interesting materials seems to point towards a sainthood for Leibowitz, and events start to roll forward to a re-instated future.

I kind of enjoyed the muted humor in this one, despite the over-abundance of monk latin. Amusingly the monks concentrate on making hand-made copies of rather mundane artefacts such as circuit diagram blueprints, the contents of which are no longer understood by anyone.

The book advances in time, and we get to see if the technically civilized people are the wiser the next time round.

(Or let's say, "The Invasion of the Space Eugenists")

Sorry to be a bit wordy about this. This is one of those book I bravely went through in my teenager years. Despite not liking it all much back then it may have made some kind of impression on me. Now, reading it as an adult it was much easier and compelling read, but I'm more able to articulate my reservations about this.

This is hardly science fiction at all (which is not the problem) but a spiritual/inner space fiction novel about cosmic empires taking hold and colonizing planets. There will be no gadgets, tech-wizardry or space battles... okay, there are space battles but they are waved away in a couple of sentences and it's not even clear if they happen in a physical plane at all.

The book initially starts out as a series of reports, written by the agents of the Canopus empire. It's not a huge secret that the planet Shikasta is early on revealed to be Earth (in some sense) and soon, instead of the cosmic journeys in the planet's early past, we are treated to a testimony of Earth's colonialist and racist past through extremely realistic and not to say non-science-fictional vignettes taking place in the present day (of early 1980s).

Lessing's own biography apparently serves as a starting point. The report-format enables the novel to treat long time spans and formative events in a quicker pace, shifting viewpoint as necessary. This is very effective and makes for a sort of prismatic reading. As the pace eventually slows down to support the more mundane events, this enhancement is also stripped off.

Emissaries of the spiritual planes choose to be born into this planet as human beings to manipulate it to their ends. Whereas the evil empire of Shammat brings all the devil into it, seeking to disrupt the connection to the better worlds, Canopus (and to some extent Sirius) bring all the goodness and harmony. Perhaps influenced by the ancient astronaut hypothesis, artefacts such as Stonehenge are remnants of the harmonically built structures of the bygone eons. Early biblical events have their roots in the Canopus-Shammat interferences, and so on.

The problem to me seems to be that although the loosening of Canopus' grip appears to result from breaking the Edenic beginnings, this event is not treated as the breaking of an umbilical but as an absolute malfeasance that needs to be corrected, and corrected it will be. Also, as the breakup results in a horrific catastrophe for the humanity, it appears to me a sign of a bit poor planning from the good fellows of Canopus.

But worry not, the human race will be joined to the Canopian paradise, read: devoid of any interesting culture and perhaps even of free will. Possibly, just possibly, the novel is meant to be read in a critical tone, the reader is meant to ponder about evils of Earth's colonial history and then ask whether Canopus is correct in adding Earth to their blissful Empire.

At some times it feels close to that nauseating idea that the evils of Earth are not a result of human stupidity but an outcome of supernatural meddling. However this is sort of avoided as the "human stupidity" is explored in meticulous detail as the white race is put on trial at the end. Also, the spiritual emissaries are not omnipotent, they are instead straining to keep focused on their intended mission.

But it's still the kind of world-view where youth delinquency and perhaps Punk subculture would work as a sign of corruption if not plain stand-in for evilness. The less eloquent and more crude language the character uses, the more evil they are likely to be. Not that this happens a lot, as the only strong swearword is contained in a Shammatian lackey's message, but it's somehow telling.

I was unaware of the Sufist connection before reading the Wikipedia article on this book, at least the SAWF/Sufi wordplay is lost on the Finnish translation I used. To me the religious undertones made the book seem less timeless. The science-fictional precedents are likely the Olaf Stapledon novels mentioned in the introduction.

Ballard is a big name in new wave sci-fi, but I've not read his works. This collection of short stories is written better than sci-fi on average, but there is also something a bit dull about it.

The stories dwell on desolate environments, with the emphasis more on fantastic or magical realism than science fiction proper. This is bit like Twilight Zone but with less twist endings and more about the tone and poetic sentiments.

Despite having been written before moon landings, there's surprisingly little space optimism in these stories. Astronauts rarely leave earth and if they do, it hardly results in anything good.

Philip K. Dick does come to mind, but although drugs, fractured realities, dysfunctional relationships and insanity weigh heavy in Ballard's text, it is more matter-of-fact and lacks the kind of mental streak that Dick's novels have.

An atomic explosion, sexy agents, nuclear holocaust, a billion-year plot, all in the 20 first pages.

A Lovecraft-induced idea of beings beyond time and space who battle their cosmic war and poor Earth is in the middle of it.

This is an intriguing starting point, but it turns to rather mundane pulp sci-fi. The series, I'm told, is instrumental in introducing the now standard ideas about spacewar with energy weapons and shields, battle formations and such. Star Trek further codified these ideas and gave them a stronger visual form, but it's basically all here already.

If I'm not wrong the early computer game Spacewar! was inspired by Doc's space battles. Also, there's a space battle simulating board game that carries the name Triplanetary. So, the cultural repercussions of Smith's worlds are not to be underestimated.

However the cosmic setting tends to descend into uninteresting spacey fights with damsels saved left and right. Possibly the later sequels redeem this, but with this book I didn't get the appeal of Smith's universe. Perhaps it was more important in inspiring Asimov.

Speaking of Asimov... well, I'll save it for later.

Posted by Tero Heikkinen at 13:10 No comments: 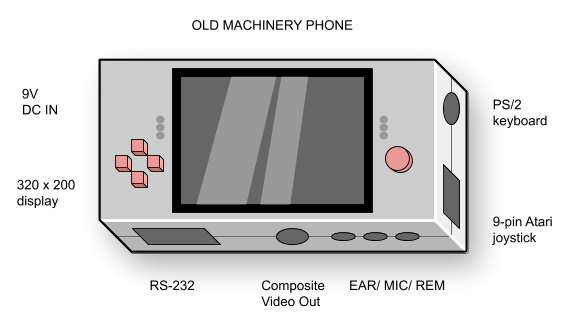 Features:
Feel free to build one yourself.
Posted by Tero Heikkinen at 09:37 1 comment: