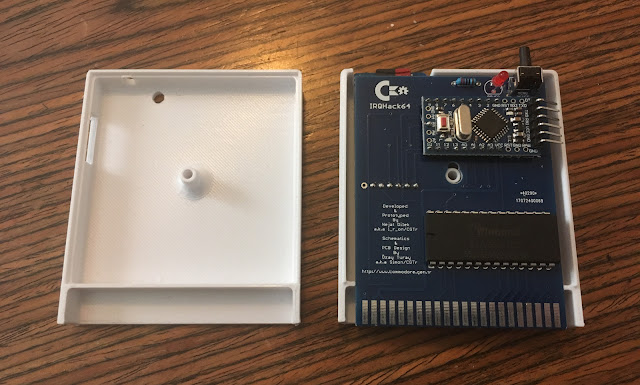 The IRQHack 64 may not be as widely known as the SD2IEC disk emulator or the Ultimate cartridge. The IRQHack loads Commodore 64 programs (prg) super-fast and does small cartridge (crt) files too. I also hear about a possible serial transfer between a PC and the C64.

As can be seen, IRQHack uses ready-made Arduino components (A Pro Mini or a variant). The IRQHack is developed and prototyped by Nejat Dilek, with schematics and PCB design by Özay Turay.

I bought this one as assembled inside a neat 3D-printed casing, with the EPROM burned beforehand. The only thing left to do was to format a FAT32 microSD card and put the necessary files there. Without a prg loader menu, the cart doesn't do much.

One is needed in the root folder of the SD card. The I_R_on menu is simpler, the wizofwor version has a moving graphics effect. Both have background music which I guess is ok for showing that the sound works, but it feels a bit unnecessary.

Pressing the button rapidly, the menu will be activated. Pressing it for a tiny bit longer generates a normal reset. Pressing it 2-5 seconds (it gets complicated!) the current selected software can be made to autostart the next time the computer is powered on.

Using the cartridge reset or reset from a separate device did not result in the prg autostart. I guess it could bring complications, but an auto-run from the reset would be useful too.


The menus don't have much functionality in them. Both menu alternatives use + and - keys for up and down, which I felt was slightly clumsy, arrow keys might have been better. The SD file folder structure is supported.

I also noted that some game prgs crashed, although they worked with the SD2IEC. I've not looked deeper to this, but I did try a different C64 and removing the peripherals, with no result.

For the single purpose of loading prgs fast, IRQHack is very handy. It's also nice to boot directly to the program you want. Make the C-64 boot directly to a SID tracker, image editor, or a comprehensive file menu system?

I thought about comparing the IRQHack with the SD2IEC but it's a bit pointless as I can connect both at the same time. The IRQHack potentially complements the SD2IEC setup, except as I can't have the Final Cartridge or Action Replay I lose monitor and fastload functions.

As a small consolation a RAM version of Jiffydos can give a fastloader at least, but in this form it can have some limitations. It could load a single-file game from the SD2IEC rather nicely, but on another occasion a program failed to run properly with the Jiffydos in RAM. It can still be helpful in supporting common file operations.

As the IRQHack does not do disk emulation, and the cartridge image loading is limited, it is far from an end-all solution for your favorite games and demo library. It might fall uncomfortably between Ultimate (which I still don't personally own) and the SD2IEC, but it is a reasonably cheap & nice tool for someone like me who dabbles in C64 code and graphics cross-development. 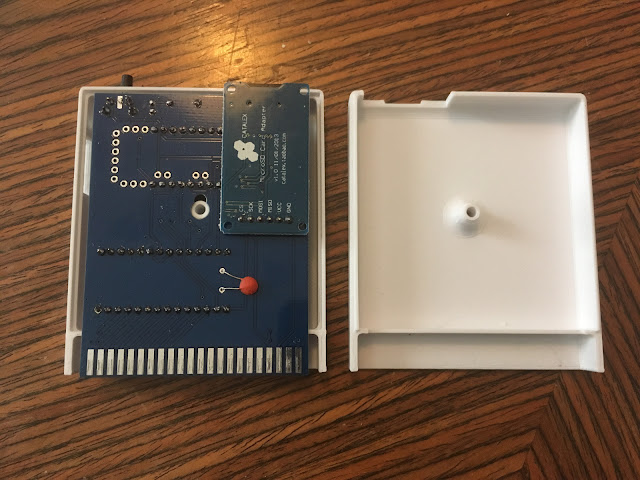 Until the next time

These were my surface impressions, I'll get back to the serial transfer function when I have a USB-TTL serial cable for the Arduino pins. In my eyes this would improve the worth of this cartridge a lot if the transfer works as smoothly as I hope it would.

In the future I might also get into the sources a bit more. I installed 64tass assembler to my Linux, and using the .bat files as guidance, I had some success with compiling irqhack64.prg.

The version I compiled could not in the end access folders from the SD card so I'll forget about it for a while. It might be that the C64 menu program, the EEPROM stuff and Arduino code all have to be corresponding versions (the included script compiles everything) and I currently don't have the gear and patience to do all that.
Part 2: IRQHack64 and serial transfer
Posted by Tero Heikkinen at 12:25 No comments:

Last weekend I went to the Commodore 64 demoscene party ZOO, held in Akaa, Finland. I participated in 2013, very much intended to participate in 2015 but that plan fell through, so it was nice to "return" to the ZOO atmosphere.

I've never felt like a huge scener, but I've started to recognize and connect a bunch of faces and names, so I guess something is happening :) This is not a party report/review about who was there and what cool shit happened, I'll just ramble about my own participation and the presentations and compos there.

There were numerous categories: demo, basic demo, graphics, music, wild, party, PETSCII and party feature. A sort of specialty of ZOO is the heavy emphasis on the PETSCII text art competition and the BASIC compo as an added flavor. Both usually have a spate of joke entries so I was surprised to see everyone had taken both quite seriously.

Although the standard of the PETSCII stuff was very high overall, I felt a bit weary about it. I guess I'm projecting my feelings about my own competent-yet-a-bit-tired work for the compo here. One novelty was Marq's stereoscopic PETSCII image, I guess a proof of concept that it's possible!

For the graphics compo, I had prepared a multicolor bitmap, again made with Multipaint. I'm quite happy about the process, this time I avoided spending hours and hours on anti-aliasing and dithering. Compared to my Inside Job with same subject matter from a few years back, the figure is much more dynamic.
Against some of the best of Finnish (and some international!) C64 talent, the pictures were not enough to reach prize positions. I also made a BASIC demo entry, but less I say about that the better - I had hoped there would have been only 2-3 entries.

The 2013 victory kind of made us responsible to participate, so it felt a bit bad we did not have a demo for the main event. I guess the main demo compo was ok, but it was getting a bit late I could not pay so much attention to it.

Before the compos, there were presentations galore. Marq gave a presentation about PETSCII and the PETSCII editor, based partly on our academic work and partly on the development side of the editor. There was not that much news to me obviously. The creation of the editor was very much tied to the 2013 ZOO compo so it was nice to see it addressed here. But there can be such a thing as a PETSCII overdose :)

Juho Kuorikoski, the author of many Finnish gaming books, was pimping his new C64 book, which sadly was available only in very small numbers. The crowdsourcing campaign probably meant only the contributors receive the book first. Not obsessed with the C64, his relation to the computer could be defined as "normal", so perhaps he is the right guy to write a thorough popular book about the Commodore phenomenon in Finland.

Another enjoyable presentation was given by Pasi Hytönen, the guy who made the game Uuno Turhapuro Muuttaa Maalle back in 1986, pretty much the only Finnish film licence game in Finland in the 64 era. The batch was not too huge, so especially the disk version fetches high prices in net auctions nowadays. Pasi talked about his ORIC/BASIC days, and I was surprised to learn he had been quite involved in the game development scene ever since. (Including 1990s dead ends such as WAP/mobile/multimedia stuff)

Gideon, the Ultimate cart guy, gave a Q&A presentation about the new Ultimate 64. He had a functioning board with him, and although it's as good as finished the release is still some times off. He sold all the Ultimate cartridges he had with him, so I wasn't too tempted to buy one. Guess I'll save my money for that total machine, although the benefit of a cart version is that you can use it with any C64...

It would have been sweet if the new C64 and the new C64 book had been properly available at the party, but what's impossible is impossible. What with both the Uuno programmer and the musician ("Jori Olkkonen" back in the day) present I sort of half-expected some announcement of a new collaboration, but I guess that would have been too strange to happen.

The venue as a space is excellent, as the main hall is clearly designed for performative presentations. There's ample room for tables, there's a mezzanine, sauna and connected hotel rooms (for those quick enough to grab these).
The bar inside the main hall, next to the computer tables is a bit of a mixed blessing. Yes, sure it provides a constant atmosphere and is a very clear and professional way to access all merchandise/drinks. But the sound of bar chatter nearby can also be a bit distracting, especially when there are more "serious" presentations.

It's nice to have active lights, but truth be told I'd prefer if the display projection was a bit bigger.  I also sometimes wondered if the saturation from the C64 signal is a bit overblown with the projector. The C64 pics looked almost like ZX Spectrum sometimes. This seems quite common in parties, though. I guess an effort has been put to give a good quality image, and maybe the image is more "technically correct" in some ways, but does it correspond with a conventional monitor display?

Overall, amazing times. Maybe the 2013 event had more novelty and excitement for me, as it was the first time for me, but all the events, participants and programme kept it interesting.

Posted by Tero Heikkinen at 12:09 No comments: