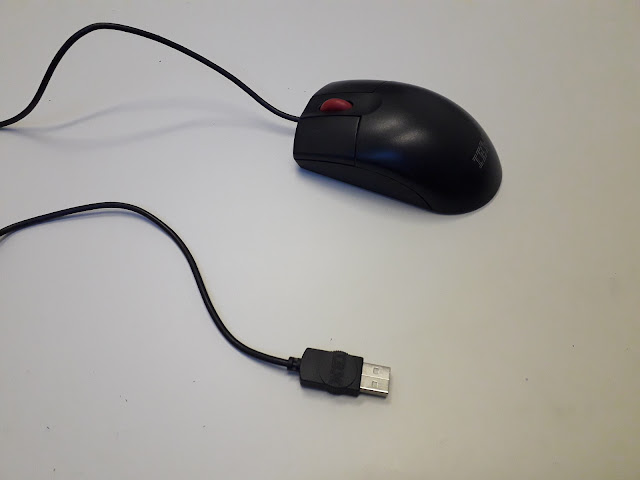 This MO28UO is an IBM-branded mouse from early 2000s I suppose. Looking around it may have been sold as Lenovo-branded too. Certainly it would fit the Thinkpad colour theme...

Although I like the slightly old-school weight and speed of the mouse, I noted the wheel is prone to mis-interpret the direction.

I opened the mouse and took some images. 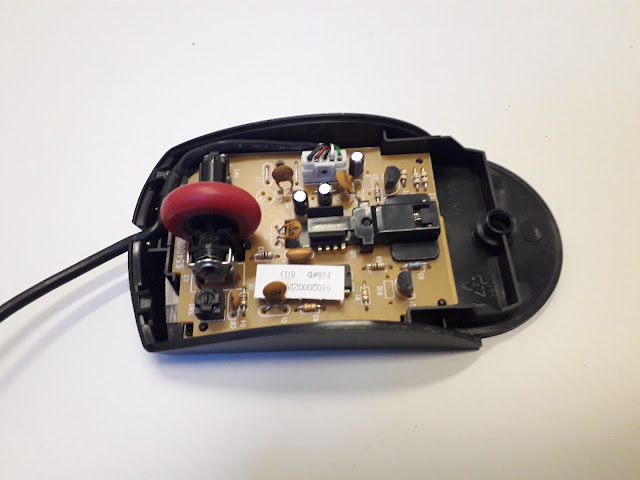 The scroll wheel is not based on an optical coupler, so the wheel doesn't have holes. The axle had accumulated some dirt and hairs, which I removed.

I didn't expect it to matter much in this case. 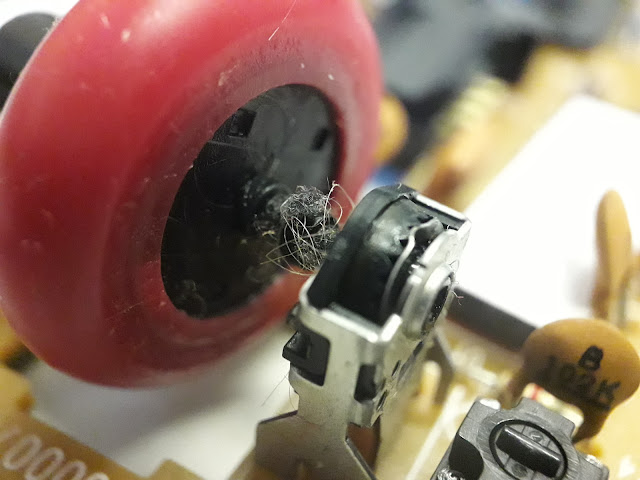 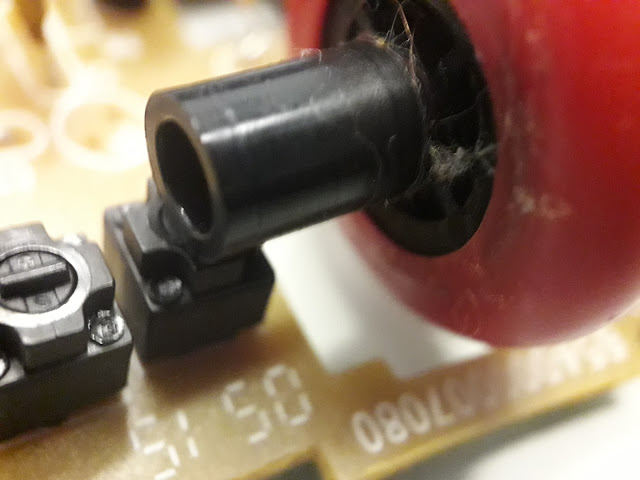 The wheel part is simply lying on top of the wheel button switch, which might already be a source of some problems.

After cleaning, the wheel might have improved slightly but I suspect the mechanism is simply not that good to begin with, or it has become worn out.

Although a tactile/audible response from the wheel is a good thing, this one's a bit too noisy for my tastes.

So I guess I'll abandon this mouse... 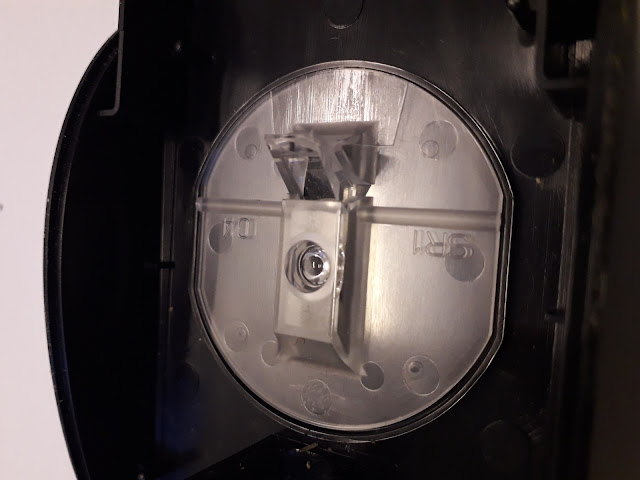 Posted by Tero Heikkinen at 10:46 No comments:

Looking at my stash of unfinished and experimental PETSCII character art files, I found some Digiloi work-in-progress materials I had forgotten.

Here's a screen where the main character was fleshed out: 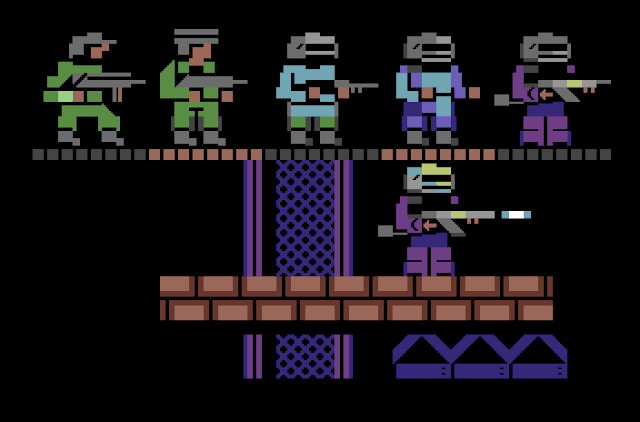 The nice thing about this image is that I've collected the versions in a chronological order, from left to right.
As can be seen, the first attempt is ridiculously stupid and a 1980s BASIC game might have been forgiven for having such a crude shape in it.

I guess the solitary guy is the one where I felt I'd "got it", although as can be seen it's still some way off. Note also the sketching of background graphics. 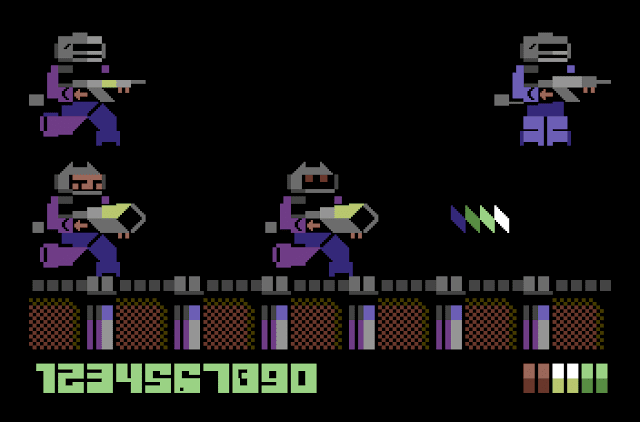 This is a frame from an animation where I drew the running frames over a scrolling floor. Using Marq's PETSCII editor it's quite easy to do animation.

Not sure if I ever planned to do a scrolling game, it may simply be the animation loop was easier to test this way.

I also can't remember if the one in the middle is an alternative design based on the one on the left, or the other way round.

That laser shape was on for quite a while before I saw it would not work over a background.

I think the huge gun finishes the character, it's part of the character really. Parts of the previous designs went into the bad guy graphics. 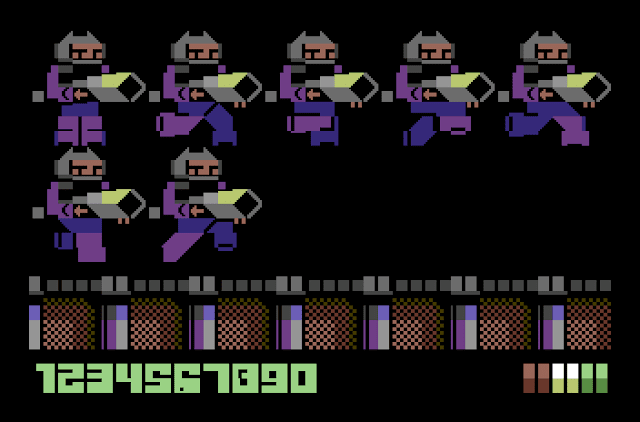 Here are the original "sprites" for the main character, which I thought were finished. In the end I never used a "stand-still" frame in the game.

However, testing the player character over a background, it did not quite work. I changed the colour to green which stands out better against a dark-ish background. Then the tiny details and rounding had to go too, because they would generate ugly black outlines. 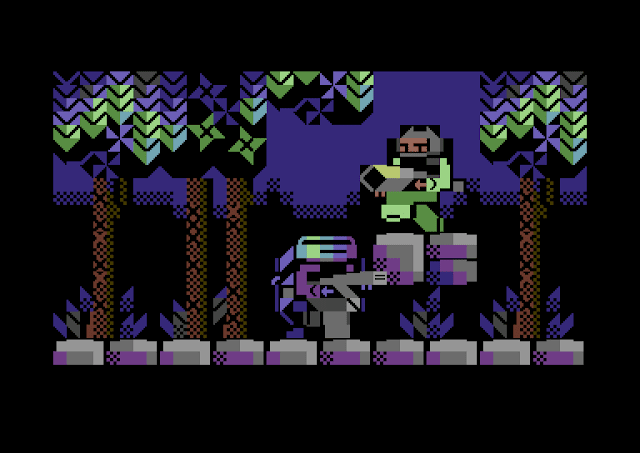 This snapshot from an early build shows the problem. Even the finished game has some black outlines.

I also found some extra background tiles, most of which did not find their place in the game: 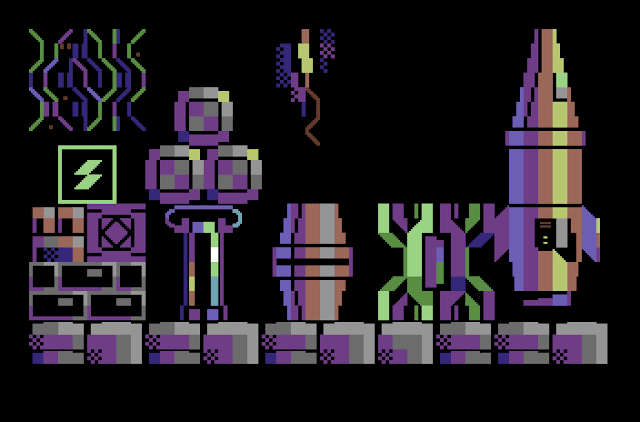 Another background-related image shows the "running in a dark forest" idea that sort of defines the first moments of the game.

As this is an early build, the graphics routines are tested over a static PETSCII drawing. When I moved over to tile-based rooms, I had to compromise with the trees and the style became quite different. 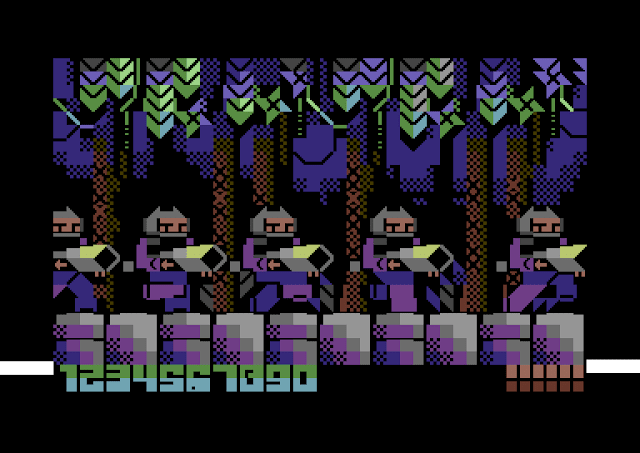 Although this is just a test, I also toyed with the idea of beginning the game with a bunch of these guys running alongside the player, then disappearing "somewhere." I guess it would have been simply confusing.

So there it is, everything I could find!
Posted by Tero Heikkinen at 23:16 1 comment:

Some recollections from my participation at the Commodore 64-only demoparty, Zoo, held at Akaa during 4th-6th of October. Again, not really a party report, I'm mostly talking about my own works.

My pre-party mood was a bit pessimistic, after not catching a hotel room. Another thing I worried about a bit was not having any prods for the compos by the time I arrived. But I managed, as usual, do something on the spot.

It turned out the common accommodation at the nearby building was much better than I expected. The airbeds are cozy and the space was not jam-packed. It actually has a few pros compared to the hotel room, mainly it is very silent (the party noise won't reach there) but it's also cheap. If only I hadn't forgotten to pack the roll-up bed...

SID was a general theme of the event. Grue gave an overall 'mythbusting' session about the SID and played concrete examples of playing the same songs on different SIDs. The differences were quite drastic, in some cases the wrong SID can even hide the lead instrument.

The bottom line is there is no overall 'best SID', some songs sound better on the 6581 and some better on 8580 - not even always the one the author intended! Your ears be the judge.

Flex gave a workshop on Goattracker. It's a complex piece of software, and SID is complex, so I doubt anyone could have started up Goattracker there and then and gotten finished results, but as I had at least some previous experience I could pick up one or two new things.

I mused that to be able to do SID music on C64, you have to have an understanding of many things, not just one thing:


And maybe some musical knowledge too. Well, anyway, these SID presentations encouraged me to think that it does not matter so much if I don't achieve the perfect iconic SID sound, so I started tinkering on a crappy tune following some of Flex's tips.

I had a Multipaint presentation, but I found I couldn't really 'teach' anything at this point so I simply told what the program is for and showed the main features of the new version. This led me to have chit-chats with various sceners which was maybe the best outcome of the presentation.

The software is now already quite known in the scene but not everyone will adopt it. But I don't think I'm bragging if I say it is a good introductory-level software for making C64 graphics!

My graphics entries were even less successful at the compos than last time.

Normally parties tend to go so that I pick a half-decent half-completed image from the archives and finish it, but this time my folder was rather empty. I also spent a lot of time getting a demo production working (see further below), time taken away from drawing.

The bitmap work was a quick experiment with drawing using wacom tablet with Multipaint.

I preferred the initial quick lines and was even afraid to lose them with too much detailing. So I actually like this image quite a lot (perhaps because I did not have time to grow tired of it) but it didn't go down that well in the compo.

Admittedly, a further session would have helped it a bit. (That's a damn long arm!)

I was greatly impressed with the amount of quality demos at Zoo. I recall the dry year 2013 when even a crappy PETSCII demo written in c by some idiots could win.

The Finnish Gold 'returning' with a full-size demo should/could have been a bit more grandiose. Although it was presented at the show-stealer last position, it was a bit on the short size and petered out in the end. Artline Designs demo Out of Contex delivered better overall and was the clear deserved winner. The Void Mind was still incomplete at the party but is clearly a memorable demo. PWP's Metadimension was an atmospheric generative-algorithmic work.

In the drunken tired atmosphere there was a tangible mood of having passed a turning point and a feeling of living amidst a new rise of the Finnish C64 demoscene. In a more sober hindsight, it's perhaps not all there yet... X'2020 will mark the spot.

I submitted my modest Nine Rings one-filer, based largely on re-writing Digiloi game routines. Digiloi object drawing system is naive in that it draws characters and colours separately to two buffers, and only combines them at the screen. Now I have the graphics stored in a reverse interleaved order for the drawing, and the buffer is also interleaved. So I could have 9 Digiloi-style 'sprites' on screen.

The PETSCII mode is forgiving in that I can go with 1/3 framerate and it still looks kind of acceptable. The routine was in place before Friday but I did the scripting, music and some additional graphics at the partyplace.

After hitting the ring theme, my goal was to visualize the One Ring to Rule them all... poem, giving an outline to the demo script. But as time ran out I could not add more graphics and it was left more abstract. It was well enough received.

Apart from the above presentation, Kasettilamerit made an appearance, and the bid for making demoscene a part of UNESCO World Heritage was also presented here.

At the location I bought an external kernal replacement cartridge, a REX 9628 clone. Equipped with JiffyDOS and JaffyDOS and other jibba-jabba, I'm hoping it will make an interesting companion to SD2IEC or that Raspberry floppy emulator. More about these later.

Also I got a K&A paper magazine English edition with a Digiloi review :)

(At the time of writing the listings were incomplete)
Posted by Tero Heikkinen at 13:47 No comments: