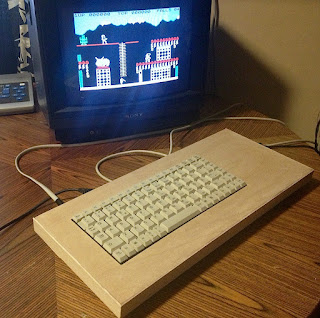 Just a small comment on the continuing Evolution I case project. I added strips of balsa to the sides of the plywood board to give it a different appearance. Although the flat plywood was kind of nice, it did not have that "old school" style I was going for.

Now the computer has this nice floating box appearance, but as a side effect the computer looks bigger, a bit uncomfortably so. The seams between the plywood and the added bits are visible, but less intruding than I had thought.
Posted by Tero Heikkinen at 11:56 No comments:

Fight for you right... to fight

When waiting for the glue to dry, I'll have a look at three Spectrum fighting games that are in a way similar. These games mixed the martial arts with exploration and adventure. Here, I'm looking at the protagonist from the side and I can explore a two-dimensional map of rooms, while occasionally kicking and punching my opponents. Simple and clear fun. Let's have a look.

The perennial (I learned a new word) favourite. Bruce Lee roams through about 20 chambers, collecting lanterns, kicking and punching his way through the army of Ninjas and Green Yamos. But that's not nearly all: there are a bunch of mobile traps, beds of daggers, moving ladders and other kind of intense platform game elements that make this game very different from almost any other fighting game that came before or after.

The game is perhaps best described as a platform game with some fighting elements. The player only has two fighting moves at his command, a punch and a fierce flying kick. Yet, these two moves are so satisfying and integrate well to the overall gameplay that there's really no need for anything else. For example, characters can fall off the platforms after a healthy kick and the enemies are also susceptible to all the same traps the player is. (There's a two-player option too.)

The game is a conversion from the C64/Atari original. I think the Spectrum one still rules, even if I'm a bit biased. (This was among the first few batches of games I ever played on the computer) Granted, it's a pretty bold move to make both the Ninja and the Green Yamo white. Yet even back in the day I had become to accept that things on the Spectrum screen rarely correspond well with reality, so I merely accepted the shapes as abstractions.

The Spectrum gameplay is in ways more bearable than the clunky and unpredictable movement in the C64/Atari version. The colour scheme is more a matter of taste, but I somehow feel the black background makes for a more pleasing environment. The palette has been used quite sparingly to avoid any colour clash problems that usually haunted Spectrum games.

The people converting this one at least tried to improve the game: For example, the Yamo is a bit more intelligent and can follow you on ladders. A pity that the enemies are otherwise far too easy to evade, which is not the case in the C64 version.

It's not a bad premise: All the moves and graphical flair of The Way of the Exploding Fist combined with a purposeful quest set as a scrolling adventure.

The game is a pretty good technical achievement on a Spectrum. It has reasonably fast scrolling and a lot of colour on screen. Also, there are different varieties of background graphics and they're quite big. The C64 version is well done too, with background music as an added bonus. What it all boils down is a boring maze. Compared to the original, every addition seems largely an illusion. Sure, the pictoresque landscapes change but there's virtually no interaction with the environment, so their role is mainly cosmetic. It's not like the fights ever take place in varying conditions. The labyrinthine playfield involves getting to places where there might be a symbol that can then be taken to another place where there might be a buddha statue. And that's about it.


Even the fighting has become tedious. Oh why, oh why do the characters need to have these loooong health bars? It makes the combat ridiculously boring. One of the more inventive things about the first Way of the Exploding Fist was the excellent balancing of the "hit points" for the combatants. You could basically get defeated by two hits, but sometimes not. I'd have thought that making the enemies mostly one-hit, and giving the player a bunch of health would have made a lot of sense here.

Props for including all the moves from the original, though. Also, the combat is slightly spiced with the enemy throwing stuff at you. I readily admit the best part is the occasional bunch of wild cats that may be nose-kicked with hilarious results.


I can sort of see that after all the graphics and backgrounds there was little memory for content. But even by just rethinking the existing ingredients, the game could have been made much more interesting. Don't get me wrong. Having said all these negative things, I still feel drawn to the game. It oozes some weird atmosphere and unfulfilled promise that has to be meditated upon, buddha-like, in front of the screen, not really trying to play the game.

Saboteur! gets many things right that Fist II got wrong. The enemy compound/base/building whatever is interesting to explore, with reasonable amount of variety and different obstacles to negotiate. In some ways it resembles Bruce Lee, but is at the same time simpler and more complex. It has some platform-jumping elements, but thankfully not too much as the jumping is a bit hard to manage.

The graphics and character sizes are pretty much the equal to Fist II, whereas the combat has been kept very simple. A bit too simple, one might say, as the guards die from a single blow. In fact, you can kill them by throwing a single rock at them. At least the different environments make the combat situations slightly different. The enemies can't be made to fall into pits, though.

Instead of wild cats there are guard dogs. These tend to be more annoying than the human guards, but this is mostly because they cannot be kicked. It seems a bit absurd, but it's a game, and you know, they make the rules. However, it's possible to throw stuff at the dogs in diagonal angle, but this requires precise timing.  Sometimes you meet both a dog and a guard, who can shoot a submachine gun at you, and then things can get a bit hectic. What I like is that unlike in Bruce Lee, all the killed opponents stay dead. There's some real incentive to killing them, as you often need to backtrack your route.

I've noted there are a couple of grenades lying around, but for some reason they are not any more powerful than throwing the bricks, pipes or rocks.

The Commodore 64 version has marginally better sound effects. Running makes a metallic sound that adds to the atmosphere. Some corners have been cut in the graphics department but essentially it's the same game. I don't remember exactly, but I think some features were missing too.


The building is interspersed with little touches that make exploration that much more rewarding. In some ways the subway is a totally useless feature, because there's no gameplay involved,  but it can be considered a kind of a cut-scene. There's a stealth element, too, as guards facing another direction can be approached slowly from behind. This adds some to the "ninja" quality in the game, even if it is bit pointless given how easy the guards are to kill anyway.

The game features a rapidly replenishing health bar, which works bit like the one in Halo. This also contributes to the silly-easy nature of the game. Though I do confess I tend to play the game on the easiest level, so what do I know.

The ultimate goal is to find a diskette and activate a bomb that blows up the base, and escape via a helicopter, with the disk if possible. With each difficulty level, the positions of the required items change. Also, the numerous doors in the building are locked in different configurations, and you have to know which terminal unlocks each of the doors. Let's just say the architects did not make the most obvious connections. Did I mention the time limit? It's mighty stressful.

The game spawned a sequel which had some neat additions, such as choosing one's own entry point by dropping out of a hang glider. Yet the game was slower, with simpler environments and harder enemies. Like the 2-meter androids with flamethrowers. This kind of details sort of distanced from the realistic tone set by the first game. Admittedly, the action cleverly extends over the screen space, so that guards from the next room can enter the space you are in. Sabouter 2 was not a complete failure, but I tend to think it as inferior to the original.

But seriously, one might think all the fighting game varieties have been exhausted long ago, but still it seems these three games demonstrate a sub-genre that could have been explored more. Although I have enjoyed Tekken and the likes, the one-on-one fighting genre does not really do it for me. Also, I'm not going to start playing Assassin's Creed or the latest Prince of Persia, I don't want the game playing to become a project, anymore. 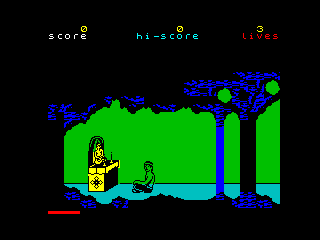 Posted by Tero Heikkinen at 20:45 No comments: