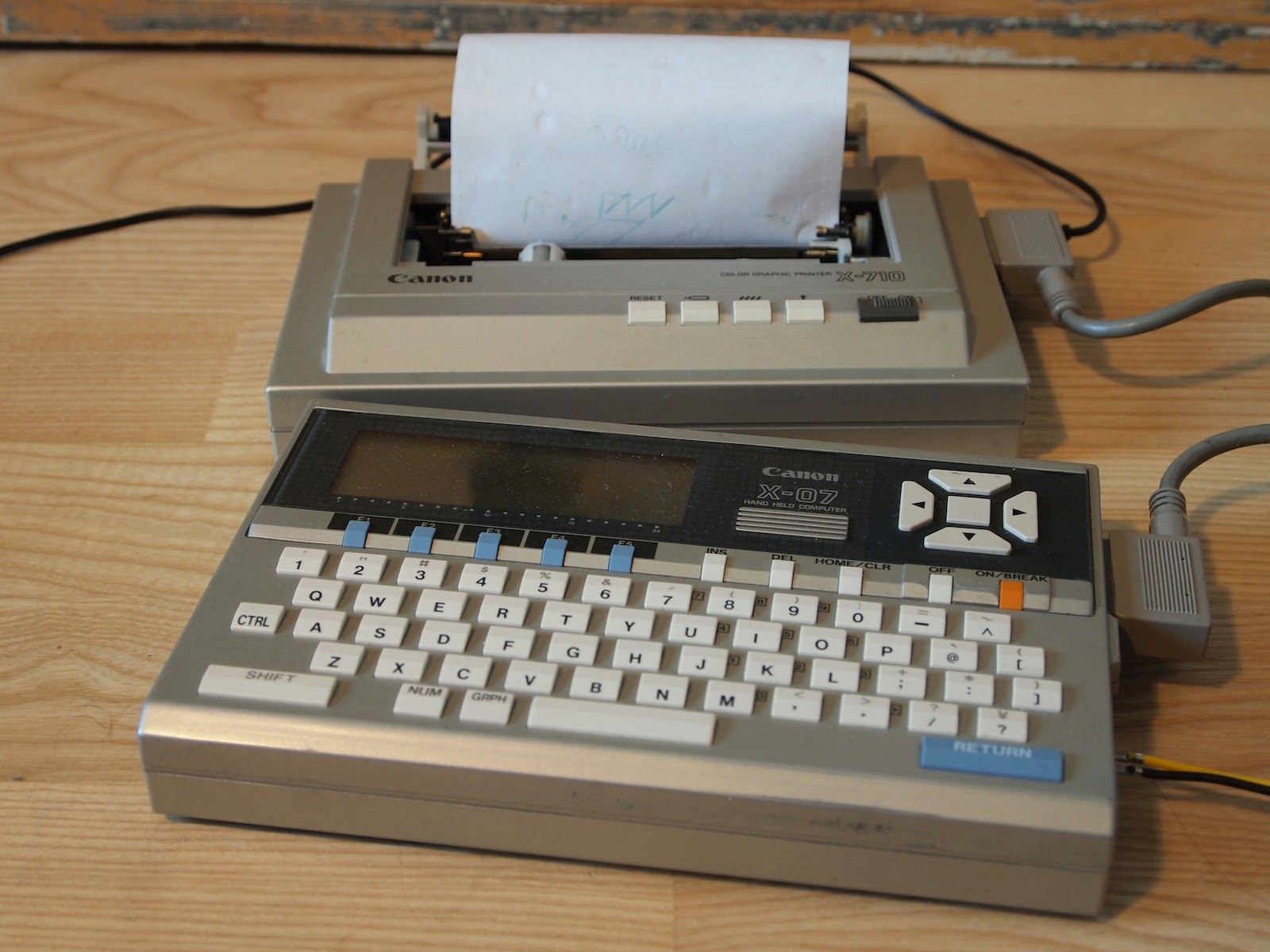 I've always sort of wanted to own a plotter, but never went for full pro equipment. Guess I knew I'd just want to play with one. Plotters at home never caught on that much, as the other printing techniques were eventually able to produce similar results on the A4-size. Still, there's something elegant about that paper-traversing pen.

Well, here's one tiny toilet paper holder plotter for Canon X-07. It came together with yet one more Canon X-07 computer. One of the neat ideas was that grey binder that covers the machine. Now, here the very same design has been simply extended to cover both the computer and the plotter, and it looks simply ridiculous. For comparison, Canon X-07 and a Canon X-07+plotter side by side:

The plotter is simply packed together with the computer, and it has to be connected to the X-07 with an external parallel cable. The connector is an 8-line wide bus, activated with a strobe signal. The plotter prints straightforwardly any text you throw at it, except in the drawing mode text commands are used to move the pen around.

The pens that came with the plotter had dried a long time ago, and attempts at rejuvenating them with water have failed despite coughing up some ink. So, I ordered some plotter pens from eBay. These are old too, but supposedly never opened. (They cost more than the plotter. Some things never change). They are not perfect, but still, I'm surprised they work at all.

The graphic mode has to be activated with LPRINT CHR$(18). Subsequently, commands such as LPRINT "M0,0" will move the pen to coordinates 0,0 with the pen up. LPRINT "D100,100" will bring the pen to coordinates 100,100 with the pen down, drawing a line in the process. Pressing Reset on the plotter will reset the pen and takes the plotter back to the text mode. The new 0,0 coordinate will be at the new pen position.

At the moment, it seems my plotter has some difficulties changing the pen colour reliably. It may be because I somehow wrecked the delicate parts of the pen revolver when replacing the pens. Oh well.


From what little I have seen this tiny plotter is able to keep the coordinates very well. The printer uses a mechanism to perforate the paper slightly from the edges. These tiny holes are at the same time used for holding the paper in position (much like matrix printers use the ready-made holes to align the paper).

It appears that most of these small plotters of the era used the same ALPS mechanism with pens of same size, so Sharp, VIC, Casio and Canon plotters might have interchangeable parts.

But who was the intended user for the plotter, or for that matter, the strange Canon X-07+plotter combo? Imagine in 1983, a businessman pulling it out of the bag during a meeting, throwing together some lines of BASIC that plot out the latest sales curve projection...

Ok, something a bit weird for a change.

Many old books on computers start by teaching the principles of binary notation, and conversions between hexadecimal and decimal. This is usually shown with something resembling the 128*b7+64*b6+32*b5+16*b4+8*b3+4*b2+2*b1+b0 formula.


Yet if I ever worked with hex, I would never really grasp this mathematical underpinning of the system. If I wrote a snippet of C64 machine code, to me "$D020" would be the memorized "name" of where I put the border colour value, and I would not really give much thought to what it was in decimal. Similarly, I just knew that $C000 was 49152, without doing the conversion.

Also, when building user defined graphic characters on the Spectrum BASIC, I'd be lazy and use the BIN 00011000 style statements instead of converting them into the shorter decimal form. Even then, if the patterns were simple and repeated often, I'd use 255 for BIN 11111111 and 24 for BIN 00011000 because I "knew" these values by heart, not because I was good at calculating the decimal in my "head".

Yeah, I can nowadays get along between small binary, decimal and hex values, but I could still do better. Although the modern programmer does not need to know that much about binary or hex, with retro computers and digital electronics, they are quite relevant.

From my previous experiences, I have begun to think, why would learning binary be different from learning guitar chords or another alphabet? People can memorize numerous guitar chords without having a through-and-through understanding of the mathematics of the chord theory. Did the computer books go a bit wrong way about the whole binary thing, especially for beginners?

I think the guitar chords are a good example: Through perseverance, a number of chords can be memorized directly. Knowing three chords, something satisfying can already be played. Then you can add more chords to your repertoire as you learn more complex and more satisfying songs. But learning hits really when you see that somewhat similar chords can be grouped sensibly.

With this in mind, I began pursuing a learning approach that would help me convert binary/hex/decimal. I can't vouch for any "system" here but perhaps this gives some ideas.


I imagined each hex number to have an alternative 4-bit binary "glyph" or notation that needs to be memorized. These are simply binary versions of the same numbers, yet visualized as blocks. I've abandoned the 0/1 notation, because we're not necessarily dealing with numbers, but HIGH/LOW,  ON/OFF and TRUE/FALSE states, or indeed, bitmaps.


With eight-bit numbers (0-255 or 0x00-0xFF or $00-$FF) the amount of "letters" in the alphabet would be too big to memorize. However, only 16 "glyphs" are really needed when moving between hex and binary, because each hex number corresponds directly to four binary numbers.

Each 8-bit hecadecimal number is made out of two such components. Below is an example of a few of such combinations. Referring to the above alphabet, it can be easily seen how the hex values are built, without any "calculation" going on. 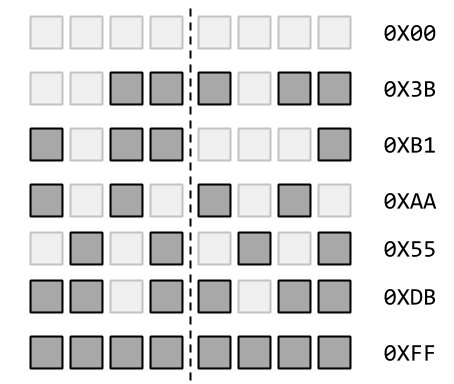 This would already form the basis for the notation of 8x8 characters, familiar from 1980s micro computers. Note that as the required pieces are repeated, there's a need for only a few distinct values. (Remember the three-chord analogy...) 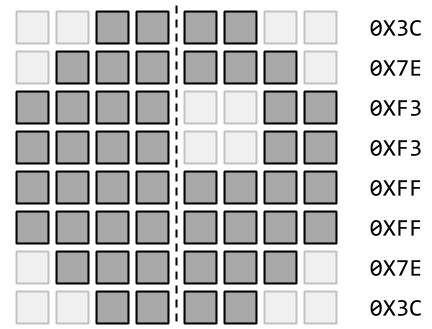 Normal letters are grouped to wovels and consonants, musical chords can be sharp, flat, diminished and so on. Grouping can advance learning and analysis. Both the alphabet and chords are often teached from the simpler towards the more complex. Below, I have attempted to group the binary glyphs according to simplicity and order.

But it should be apparent, that by moving the block right or left, the number becomes divided or multiplied by two. This holds true for all binary graphics that can be moved so that the figure still stays intact. This is really the basis of the grouping here. So, 0101 is five (0x5) in decimal, but 1010 is ten (0xA). The point here is that knowing one can lead to knowing the other, knowing 5 you will know 10 and vice versa. 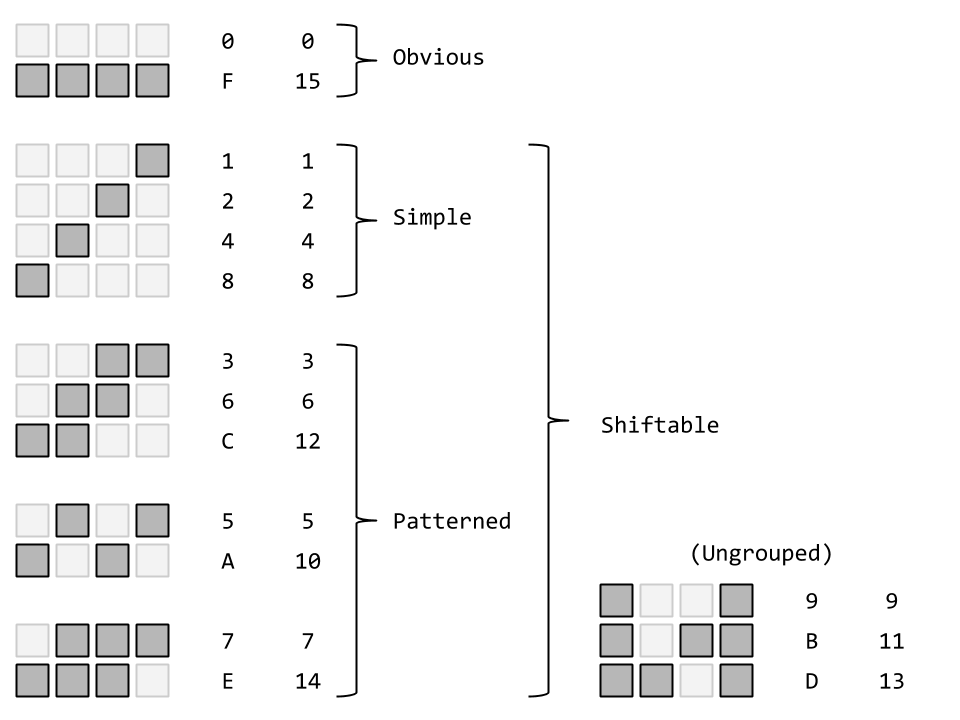 There's only three "letters" that are not grouped in this way in the above system, 0x9, 0xB and 0xD, as the can't be shifted. (Neither can 0 or 15, but they are exempt from this difficulty anyway.)

There's another way to group the binary family that might be helpful. The image below limits the family to eight "root" glyphs, which is half the number of 16. 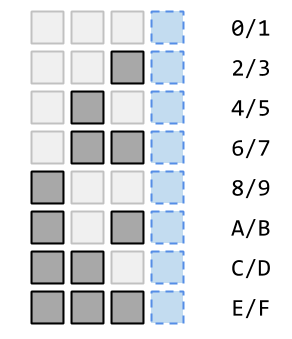 I only show this because it has some resemblance to the way guitar and piano chords can be varied by adjusting the last note. (Think the difference between the open guitar chord C and C7) This is more to demonstrate that there are a number of approaches by which to exercise your binary muscles without going too deep to the math side of things.

Another additional tool is to learn to rapidly invert the values and gain the result from a simple calculation. Meaning, each of the empty/white regions are considered black and vice versa. Looking at 1001, I can think of 0110 which is 6. at which point I have to think "15-6" which brings up 9, the decimal value of 1001. But this is already a bit cumbersome and introduces calculation in a way I hoped to avoid.

I think the sixteen shapes could simply be learned by heart. Most of the above might be dismissed as tricks that can be somewhat helpful in the process of learning. Yet they also have the added significance in that inverting and shifting are also common and useful operations in machine code and discrete logic. To "know" binary and hex is to "know" how they are to be manipulated, it is not simply a matter of converting them between each other.

Indeed, what about decimal conversion? Here I'm on a bit shakier ground. For 8-bit numbers (0-255), one could learn a second "alphabet", for the higher part of the byte:

These are the previous values * 16. This value will have to be added with the lower part, and I'm uncertain if this is more handy system than simply adding all the binaries individually together just as the books say. 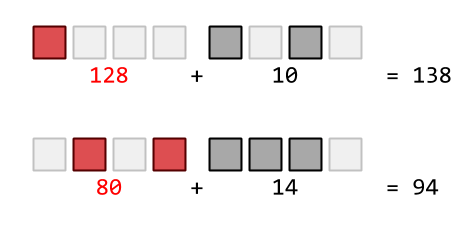 Besides, the route for converting decimal values back to binary is not as obvious. You would have to see that a value such as decimal 119 is above 112 yet below 128, and so would have the 0111 high portion.

Yet, the above is less helpful for deciphering a random 16-bit value. I'd need yet another "alphabet" for the lower part of the high byte, which I just can't think is the road to go now.

But, umm, yes, anyways. At least the hex-bin thingy is easy. And 8-bit numbers are not that bad. I think I'll go back doing whatever I was doing.
Posted by Tero Heikkinen at 14:04 No comments: