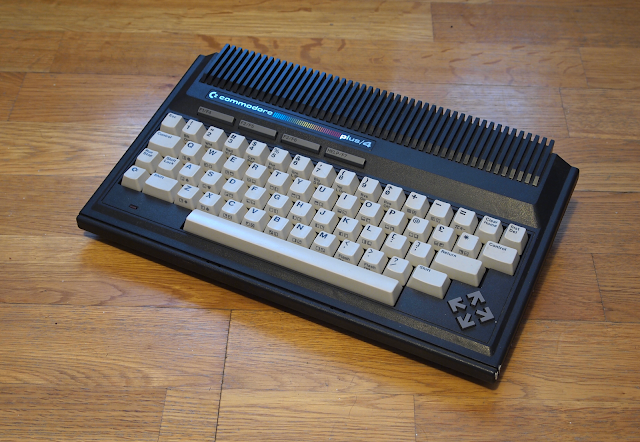 Thought I'd say a little about Commodore Plus/4 now that I'm a bit more familiar with it. When I got this computer I expected to feel the kind of enjoyment when exploring Panasonic JR-200. I can't explain why. Neither can I explain why it didn't turn out that way. It's still an interesting computer, though.

Compared to how well-known C64 and VIC-20 are, Plus/4 can be called fairly obscure. At least I never saw a physical Plus/4 in Finland back in the day.

Instead of going upward from C64, Commodore decided to go a bit sideways and somewhat back with this computer. From a manufacture perspective, the C64 was perhaps a bit troubled with having so many of those glorious chips, so creating simpler hardware seemed attractive.  Goodbye VIC and SID, the TED chip takes care of it all.

The Plus/4 has more than 60k available for BASIC programming, accessible graphics modes and built-in software packages. Outwardly there is something of the 'spectrum' in it, what with the black plastic case and polygonal shapings. Even the boot-up screen seems like a concession towards Sinclair sensibilities: a grayish white background.

The BASIC has more features than before, though I'd say in user-friendliness it's not equal to Sinclair BASIC or the MSX implementation of Microsoft basic. Neither is it as versatile as the QL SuperBASIC or Amstrad BASIC.

GRAPHIC 2 gives the bitmap mode and GRAPHIC 0 gives back the text mode. Cleverly, using commands like INPUT in middle of GRAPHIC 2 gives a split-screen bitmap/text mode. Lines, rectangles, circles, flood fills etc., all of course are very slow. For once, there is a command for clearing the screen: SCNCLR.

Fortunately the computer has a typewriter keyboard, even though the uniquely styled cursor keys have been only half-thought out.  Surprisingly, my keyboard does not work as well as thirty-year old C64 keyboards, even if I suspect it has not been used that much.


Commodore floppy drives and SD2IEC work with Plus/4, so it's possible to access the software catalog or do at least something meaningful with the computer. The new type joystick connector is simply silly.

Graphics are nominally better than in the Commodore 64, but the resolutions and text modes are pretty same as in the C64. The usual PETSCII text graphics are in effect, which is a good thing. An 80-column mode might have been welcome but nothing outside of a monitor would have displayed it in a satisfactory manner anyway. 121 colors sounds a lot but the palette is dominated with pastels.

The color palette appears a bit suspect when shown in its totality, but people have made some amazing pictures with it. The trick I suppose is not to try to modulate the colors with the luminosities directly (like below) but find smooth gradients by using different parts around the whole palette.

The built-in software is a waste of potential. One would imagine that a character display-based text editor would be fast and responsive, but here the implementation is slow. The rest of the package is more like extended support features for the text editor rather than proper software.

One good feature is the built-in machine code monitor, accessed by typing MONITOR in Basic. A monitor is very helpful for at least educating the programmer. Perhaps a full-blown assembler instead of the 3-in-1 package might have made the computer even more interesting. Sadly, without the added boost of the C64 chips the processor is left to do everything and compared to the Z80 the 6502 is not quite up to the task.

Cross-developing for the Plus/4 is pretty similar to C64, simply use cl65 and -t plus4 as parameters.

The following activates the hi-res bitmap mode and sets it to start from $4000 onwards. 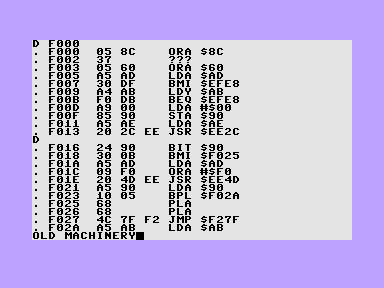 With the Plus/4, Commodore introduced a new line of computers that were not meant to be any more compatible with the C64 than the C64 was compatible with the VIC-20. It was maybe hampered by a public perception that whatever Commodore made ought to be a continuation of the C64 thinking. Later days have shown the Plus/4 to be a quite capable and robust little 8-bitter.


Posted by Tero Heikkinen at 15:11 No comments:


Like many retro-heads, I was wowed for a while by the Apple iPad. It seemed that most interesting retro game stuff happened on that platform. But in the end I realized that the device has a major flaw: the touchscreen.  So I went and bought the iCade bluetooth arcade stick. This turned out not to be that great an addition, so it mostly gathered dust in some corner. (Well, mostly I was disappointed with the increasingly degenerating iPad)

When I needed an extra joystick for the C64, I opened the iCade to see what could be done to convert it into a good old-fashioned 9-pin Atari/Kempston joystick. I am aware that this must have been done dozens of times by different people, but I just refused to google it.


Funnily, I did not need to solder anything. All the buttons and stick directions are very neatly connected to the tiny circuit board with such headers that easily connect to "jumper/dupont" style wires common in breadboarding. Also, all the ground wires from each button and direction switches are clearly marked black. I guess this all might be part of the intended design and greatly increases the value of the iCade in my eyes.


Admittedly, what made life easier was that I already owned a couple of very useful pieces. The 9-pin doohickey shown below is a cannibalized COM-port header/connector from a tiny Linux computer I bought from a fleamarket (now destroyed). It's very robust as the connector solder points have been drowned in epoxy. Similarly the 9-pin extender cable is something I have had around for who knows how long. The gender changer was needed in between.


It took the longest time to figure out the correct pins, because I was tired. I won't include the diagram now as I'm prone to get it wrong. The Atari 9-pin schematics are lying around the net, but it's not always clear whether it's the jack or the port side. Once the ground has been figured out the directions can be checked one at a time. Wrongly connected pins can mess the C64, especially the CIA chip so take care.

Frankly, the iCade is not ideal for home 8-bit games, as the joystick travels a bit too much compared to, say, TAC-2. The fire buttons are delightful though. For Decathlon-type games, one might even consider connecting the buttons to directions. The neat thing about iCade is that there are numerous buttons, so perhaps in the future I could be motivated to do something a bit more ambitious, like one of the buttons as space bar or other keys.

Posted by Tero Heikkinen at 21:13 No comments: