Book: The Future was Here

I finally managed to read Jimmy Maher's The Future was Here from 2012.

Before the Amiga 500 models hit shelves, Amiga really had a rather vague existence somewhere at the horizon of my experience. One of those computers that might be cool but would never ever be relevant to me, perhaps even a bit boring. The comparatively high-brow images of Botticelli's Venus and even the King Tut image were not very alluring to a 10-year old.
It's fascinating to read about the birth of the Amiga and the early handling of the platform by Commodore. When I finally saw an Amiga at the end of 1980s, things like the boing! demo were already ancient history and not that well known to a casual newbie like me in Europe.

I was also surprised to learn that the Commodore-bashing from Amiga owners did not start in the 1990s, but was almost inherent to the platform from the very beginning, including the logo debacle and poor marketing.

As the book points out, the North American Amiga experience was quite different to the European game- and demo-oriented culture, and the two overlapped very little. In the US, computer industry stalwarts, Unix alumni, scientists, professional artists, Fred Fish, adult people, flocked around the platform in the mid-1980s, eager for a revolution that seemed just around the corner, but also abandoning the platform at a point when it looked the promises failed to materialize.

I hadn't figured the boing! and Juggler demos had such a large impact on the audiences at the time. The bouncing ball was even more "fake" than I had presumed, not a single pixel is drawn during the animation.

Maher suspects part of the reputation here was that people thought it did something it really didn't. He further points out the value of the demo is in the ingenuity of making the computer do what it was good at doing.

Juggler demo was more transparent in what it did, because obviously the Amiga could not do real-time ray-tracing. But that the animation frames were produced on an Amiga at all, was already a huge achievement and paved way for a kind of cottage industry of 3D and ray-tracing applications. The use of the 4096-color HAM mode and animation itself proved inspiring, regardless of the raytracing.

The portion opening up the Juggler and boing! was an insightful read and I hadn't really understood their appeal in these terms.

Although the author doesn't say it directly, one possible reason why early Amiga demoscene demos had lot of spheres and checkerboard patterns, could be because of these two "industry" demos.

They might also be quite obvious choices. You need a very generic small, simple object that can move anywhere? It's a ball. What's a non-expensive yet somewhat complex background that works well to bitmap graphics? A checkerboard.

In any case, the Juggler was sometimes explicitly referred in early scene demos, such as in the Vectorballs demo from Dual Crew (and the Red Sector Megademo and the Cebit'90 demo and others.)


The Heyday
The paint program Deluxe Paint enjoyed a kind of "killer app" status, and the Amiga was long bundled with a version of DP. The author makes a neat analogy that Macpaint was a drawing program whereas Deluxe Paint was a painting program, demonstrating that a line can be drawn (cough) from the platform characteristics and the respective company cultures to the final product.

Yes, as a "platform study" book the author shows routes from Amiga's hardware design decisions to the software and use cases. The object under study is best understood as "emergent". Software such as Deluxe Paint or Sculpt-3D is not a determinist result of the platform's technical features, but part of a kind of sub-cultural wave that grows layer upon layer on that initial technical seed.

The platform's journey has early software milestones such as the boing! and Juggler Demo, but the culture of Commodore and essentially its "fanboys" will carry it onwards. Deluxe Paint and Protracker were in turn hugely important for the game- and demoscene culture that came after.

Amiga's important niche as a video authoring tool is also examined. This was also something very much in the far periphery for me back in the day. NewTek's Video Toaster was more of a new computer on top of Amiga than just an add-on. Its achievements barely fall into Amiga's basket, unless taking into account the aforementioned view of a 'cultural wave' emerging from and surrounding the Amiga.

Looking the Amiga's role in semi-professional and even professional video editing circles, Amiga's significance in this area is very much tied to the analog video era, very different from 2020s internet digital video ubiquity. The flickering interlaced high resolution output was a bane for traditional computer users but a boon within the video circles. The value of genloc, the logical mixing of computer image with input video, could also be puzzling unless factoring in the reigning analog video format.


The Amiga demoscene gets a looksie, using TRSI's Megademo and Spaceballs' State of the Art as opposing poles to represent the scene's technical achievement on one hand and dedicated audiovisual tinkering on the other. The standard story of the scene emerging from crack intros is told. The outcome (echoing one Viznut!) is that the scene should be examined in its own rather than shoehorning it into pre-existing categories of 'free software hackerism', 'art' or 'youth subculture', despite having some characteristics of all these.

Discussing games, the author takes an interesting standpoint that Amiga could be seen as a forerunner of today's casual games, citing Defender of the Crown and Lemmings as prime examples. Amiga is also a platform where a visually story-heavy game started to come into its own, in contrast to earlier video games that were more reaction- and rule-oriented.


The End
The author generally balances praise with critical tones. But perhaps the one area where Amiga's myth is more openly torn apart, is the multitasking operating system. Although Amiga's OS and the Workbench were landmark systems, there was also a crucial lack of memory management and the experience was hardly as friendly as the surface made it appear to be.

Workbench often needed the kind of tinkering that user of a simpler Mac or ST might never need to see. Also, some of the Amiga's innovative features would not survive a second in our security-obsessed world.

Maher argues that at least part of Amiga's downfall was hard-coded into its, despite all, somewhat shortsighted and complex design. The inventive approach that combined cheap parts for vastly more than the sum of those parts in 1985, was not as conducive to upgrading as were the more straightforward IBM PC clone components.

I'd still like to think that none of the 1980s home computers really got proper upgrades, and in this race Amiga fared a bit better than most.

Overall, Maher's Future Was Here gives a convincing case that Amiga was the first true multimedia computer, a forerunner for many desktop computer use trends that are now incredibly commonplace: creation and distribution of music, images, animations, demos, photographs, videos and much more.

To point out Amiga was not a harbinger of the mobile internet cultures of today is to miss the point. Sharing and consuming of Amiga-originated creations might have happened in the loosely-knit network of Bulletin Board Systems or the even slower network of mailed physical floppy disks. But shared they would be. Criticism and response could likewise be found in the diskmags and scrolltexts of the era.

The "I'll show mine" attitude prevalent in today's internet is already very much in evidence in the Amiga subcultures. These days, one's exploration of a musician- or visual artistship may just as well begin on a computer as on a so-called traditional medium. Amiga was the first computer to make that genuinely possible.
Posted by Tero Heikkinen at 20:07 No comments:

Jeff Minter's Moose Life has arrived. I passed Polybius because it seemed so decidedly 'VR', this felt something like I could play.

It's a Windows game, but as Proton works so well, I thought I'd buy this game from Steam even if there were no positive (or negative) reports at that moment in the proton database.

Happy to say it works on my Linux Mint/Steam. 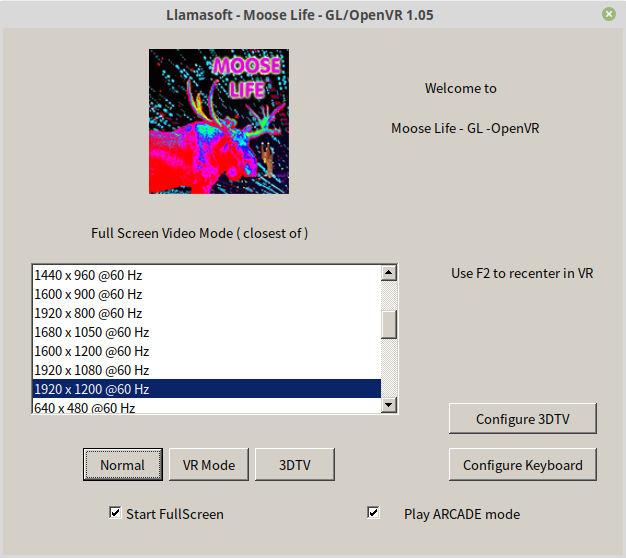 Trying to 'configure keyboard' did throw me out, though. Also, if I launched it in a windowed mode it would not sync to the vertical refresh and was over-fast. (Ticking vsync on in Nvidia settings did not help.)

I'm also doubtful if the VR/3DTV options can be made to work in Linux.

But apart from these choices, there was no tweaking. 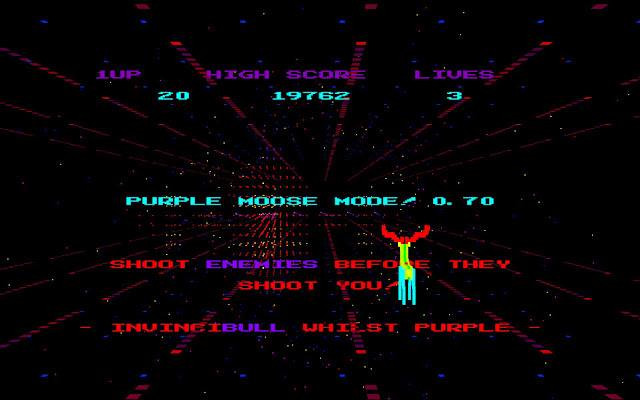 You control this voxellated moose that can move left, right, forward and backward in a flat 3D plane.  And shoot everything.

In addition you can jump back and forth between the upside down plane at the top of the screen. In the beginning this has no immediate value, but later you'll find uses for it and eventually it becomes a necessity.

Instead of mining Tempest or Robotron for inspiration, the game somewhat brings into mind a less known Eugene Jarvis game Blaster from 1983. But it's far from a remake of that game. 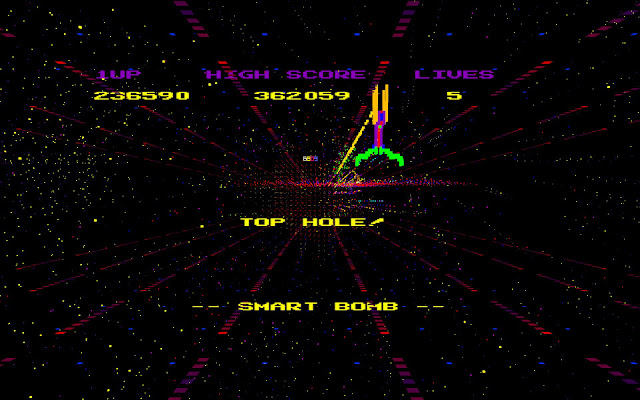 Although some ideas from all the above games might be found here, it's more clearly a Llamasoft creation.

At least in this Linux workaround setup, some of the game keys (control, alt) pressed together will tend to loose the window focus. Possibly I could just change my system settings, if I can't get to the keyboard configuration. Fortunately this does not result in a crash, in fact the game gets paused and can be continued.

Apparently you can't play the non-arcade mode without a gamepad. Didn't have one at hand just now. 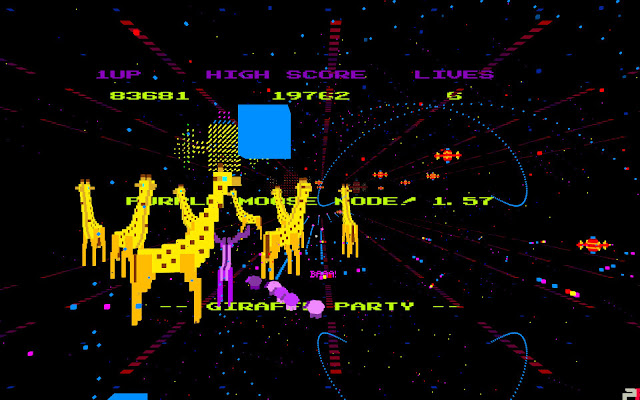 Like with many Jeff Minter games, it's a bit tricky to make a screenshot that would somehow do justice to the moving graphics. No doubt it looks really fascinating in VR.

The wide variety of power-ups brings about hilarious effects, such as creating a vertical mirror double of your moose. Various beasts appear, rotate and whirl around in different formations. Pixels, voxels and particles form clusters of explosions. 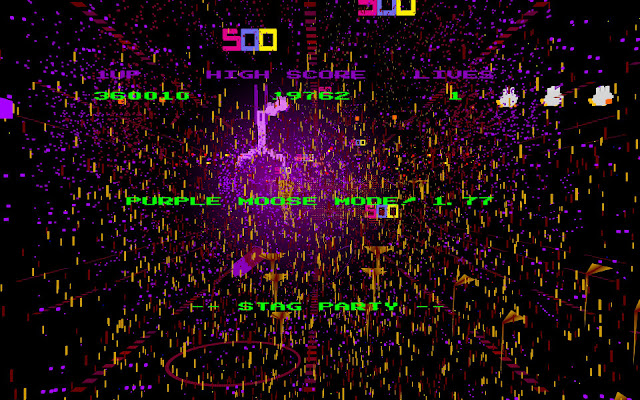 Even if the cumulative amount of effects can get very high, they are never too 'violent', which I guess is a result of considering the VR environment. In any case it gives a particular tone to these effects - there might be a second or two where you can even appreciate the expanding particle clouds.
A very nice game altogether. I'm somewhat afraid to get too deeply into it, as I might get addicted. Soo... a thumbs up I guess!

Posted by Tero Heikkinen at 11:04 No comments: