I recently acquired a clone of Sinclair's A-bike from a private net auction. I've been looking for this thing mostly because it's a Sinclair product, but I have also a fascination towards the idea of a folding bike. But not so fascinated I'd go buying other brands. Well, what I have here is not really a genuine Sinclair. I'd like to have the original but it's quite expensive and not directly available outside UK. This "chinese" knock-off has the same overall physical design, dimension and weight, so although it probably is not built to the standard of the original it's possible to say something about the concept.

The A-bike is not Sinclair's first foray into the bike market, as Sinclair designed the Zike electric bike back in the nineties. As a matter of fact, Sinclair appears to have been planning an electric-enhanced version of the A-bike, but I don't know if it has ever materialized. The bike approach at least fixes some of the image concerns the earlier C5 "car" designs might have had, as the A-bike is able to elevate the cyclist to the same height as in a proper bicycle.

It was initially frustrating to get the bike to fold and unfold properly. It seemed that always something slipped away or I made a wrong move in the wrong stage. After some dedicated training I could get it to work reliably. Not the promised "under 10 seconds", though. Now that I have some practice behind me I can get get to 20 seconds without great stress, but that is not at all bad. It's not as trivial as unfolding an umbrella, perhaps something between a deck chair and a camera tripod on a scale of inconvenience. It's pretty impressive nonetheless. It's also possible the original works a bit more smoothly. 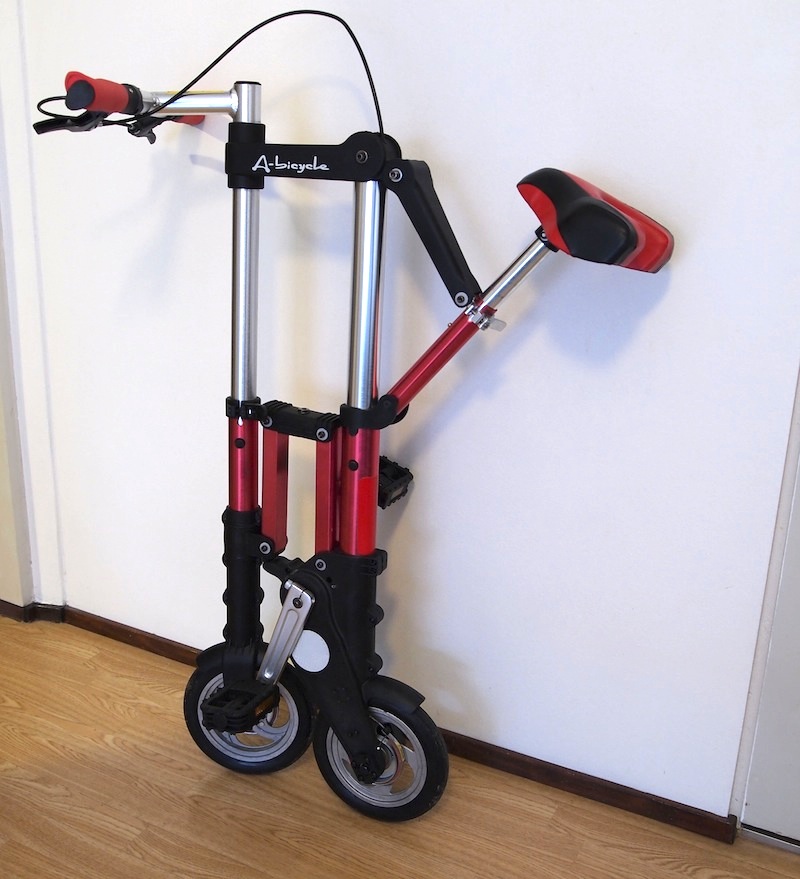 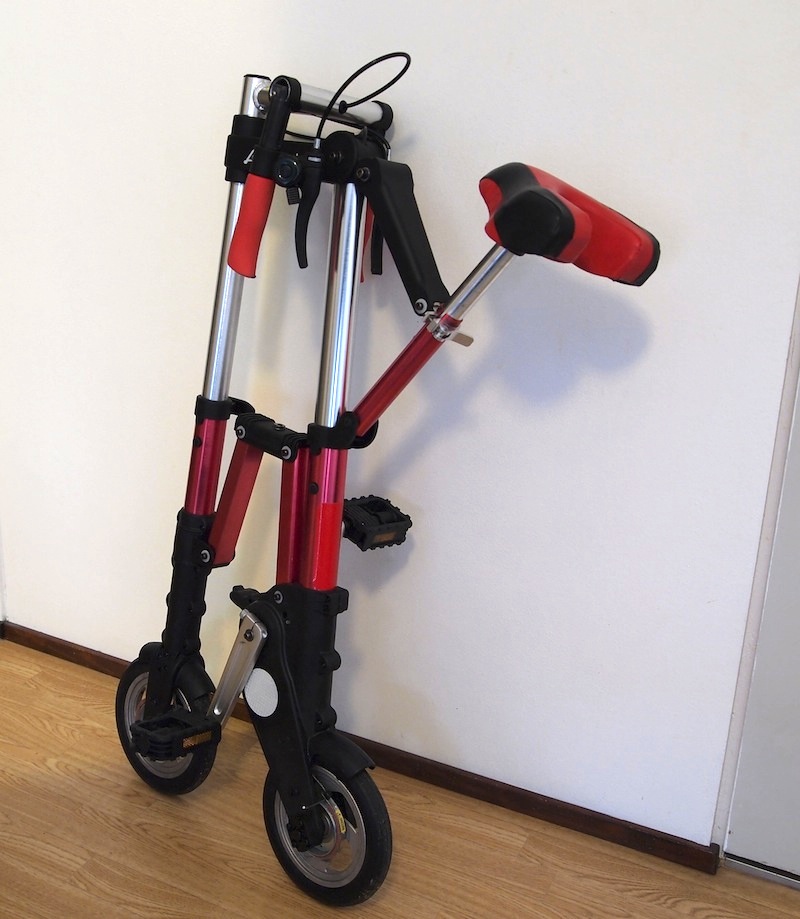 To fold in the bike, a couple of fasteners are first loosened. Then a button is squeezed in the horizontal part of the A-frame, and then the whole A-shape starts to fold in. Then two buttons are pushed in in the vertical tubes, which allows them to retract. The seat tube is levered backwards, the handlebar is rotated 180 degrees, and then what's left is to pull out and bend the handlebars (more buttons) and push in and bend in the pedals. Folding out the bike is pretty much the reverse of this procedure.

Test driving the bike, my first impression was that there's little hope of using this at any kind of cobbled or uneven roads with gaps between slates etc. Firstly the small wheels don't cope too well with the bumpiness and secondly they are quite prone to get caught into openings. Also the seat and the wheels are a bit too hard for the old behind. So it will be smooth paved roads all the way, and you'd be better of carrying or folding the bike when difficulties arise.

The 6-7 kg weight is stretching the definition of "portability" a bit. Also, the folded size, although impressively small, is still quite large for something you'd carry around comfortably. So it really works better if you don't actually have to walk distances, like standing in a tram or a bus. This is what it has been designed for, but that sounds somewhat overtly specific. The A-bike seems to fill a very narrow traffic-ecological niche, and the worrying implication is that somewhere there is a person who needs to optimize just that one bit of time use during the commute, to do something more "productive" with the hard-won minutes. To me it's better to see the bike as some kind of toy, bringing a little bit of strangeness and fascination to our lives through its mere existence.

I'm somewhat surprised that the knock-off has most of the features of the original. Compared to the information on Sinclair's website, the folded dimensions are pretty much correct and so is the weight, something I did not expect really. Yet I can see the build quality is not that great. Wherever I look I can see ill-made seams, poorly "sanded" surfaces, wobbly pieces. Compared to the original (I have to imagine) the material feel is not as good, likely the wheels and the seat are not as comfortable. The handlebars feel somewhat too rubbery and hard. The rigidness is overall a bit shoddy, and one can fear that the bike breaks down at some inopportune moment.

On the positive side, even with this copy I could get a glimpse of Sinclair's design in the 2000s. The foldability is great and the bike is about drive-able. I'd bet the genuine article is better. Has the A-bike something in common with the old school Sinclair products? Well, miniaturisation and "societal goals" have always seemed to be part of Sinclair's design philosophy, so in a sense it continues the Sinclair tradition.

Posted by Tero Heikkinen at 19:03 No comments: