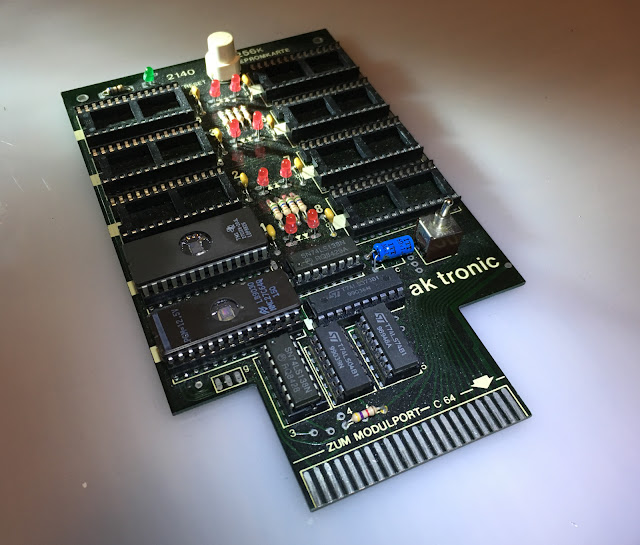 This is an ancient device for the Commodore 64 I got a few years back. The on-board chip appeared to be corrupt and only now I've had a chance to re-write the binary, which gave it life.

What is it? Truth be told, I'm not exactly sure what it is intended for. I guess it can be seen as an alternative storage device. It works as a 8-chip "carousel" cartridge EPROM switcher with the software-based selector menu burned in the 9th chip.

Hold your horses, though, it won't run your freeze/fastload cartridge collection. Even if the device accepts 8K, 16K and 32K chips, it will only run 8K-sized chunks which rules out most games. I tried Gateway to Apshai 16K binary, but it won't run.
(As an aside, it seems some early C64 games were a bit minimal not because the programmers couldn't do more, but because they wanted to fit the games inside a 16K cartridge space...)

This is model 2140 from ak tronic, perhaps from around 1984. There's some info on net but less binaries to replace the corrupt chip. After some searching, I could find the binary for the on-board EPROM, for a similar REX 9574 card from Rex Datentechnik.

The device binary was inside a D64 disk, so I had to take two bytes off the beginning to get the 8192 byte length. A similar procedure needs to be done for any emulator cartridge files (.crt), but more bytes have to be stripped off. The CBM80 identifier is helpful, but I don't see it in all binaries, what's with those carts? 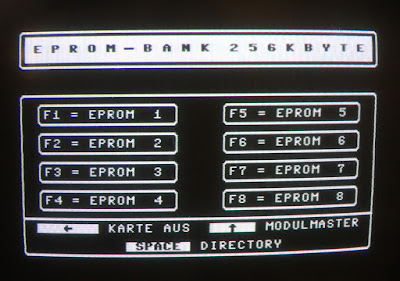 Running the C64 I am greeted with a menu for selecting one of the 8 chip slots, show the directory or enter the "modul master", which I guess is a tool for annotating the chip contents.

A couple of boring 8K things I got up and working:

For burning a 16K EPROM I can append two 8K files to make up a 16K binary with the cat command on Linux:

Looking at the manual, there are a couple of routines to access the chip memory without resorting to the main menu.

After exiting the card menu, this should run it again (if the control EPROM has been selected).

This way an EPROM can be selected:

The user EPROM needs to be on too.

The half/slot value is construed this way:

In assembler, this subroutine selects/deselects an EPROM:

For some reason, selecting slots was not always successful, the manual indicates $10 and $30 for selecting the 8K halves of a 27128 chip, I tend to find that $20 and $30 work more consistently... but perhaps not always.

I've not been able to reproduce these anomalies reliably. I found myself checking whether the cart memory was truly present, scanning the memory contents from $8000 (32768) onward. Possibly I don't understand something, or the card is a bit faulty from age.
For this reason I've not tried to change the control EPROM code, because the selector there at least works reliably. This also makes me think there is more to know about the routines.

Oh, and when the cart is on (57280), Basic seems to behave erratically and the disk device fails to work.

Sooo... Maybe it's not a too useful device in these days, but let's see if I can come up with something fun. As the EPROM memories can be paged in via software, for example some kind of animation could be played back from the chips.
Posted by Tero Heikkinen at 13:17 1 comment: