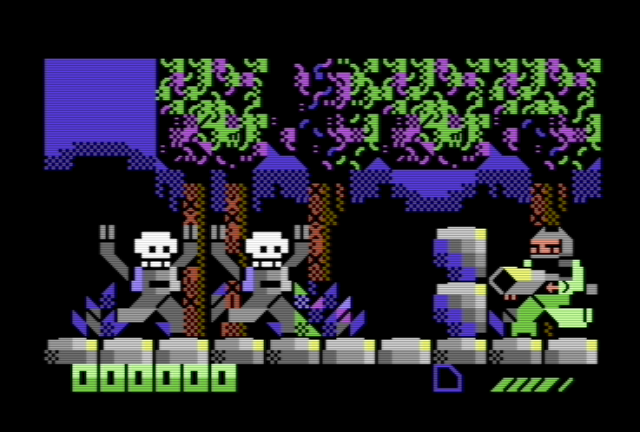 Digiloi is a game I made for Commodore 64, using only the default character graphics (PETSCII) for visuals. For some time I've wanted to use this approach. Fort Django used PETSCII for the backgrounds, but all the gameplay worked with sprites.

There's nothing special about using PETSCII for games, it was done a lot back in the day. However, not many full screen action games were done using the technique, probably because sprites are far more useful and the clunky char-by-char movement was not that attractive.

This visual style is closer to ZX Spectrum game programming techniques, even if the Speccy does not have a character display. Many ZX games had movement restricted to the color grid, with big player "sprites" to compensate. Don Priestley used his unique techniques in Benny Hill, Popeye, Trap Door, Flunky etc.

Later, others made fast arcade type games with a more streamlined approach, for example Dan Dare III, Savage!, and Extreme. What I've done is a bit of a compromise between these, an arcade game following Priestley's non-scrolling style but ignoring the more complex aspects of his routines.

I could not achieve 50 frames per second for these big dudes. I wondered if I could stick to 1/2 or 1/4 framerate, knowing that each frame would add greatly to the amount of code that can be executed. I went for 1/3, which is something like 16.67 frames per second on a PAL machine.

I use 256-byte aligned buffers for holding the current screen background and building the screen for displaying. I discarded the idea of double-buffered page swapping routines as the color memory in this mode is fixed at $D800 anyway.

The visuals and game logic are orchestrated like this:

Frame 1:
The background screen & colors, which were built on entering the "room", are copied to the respective 256-byte aligned buffers using speedcode. Copying 2K of characters and colors takes nearly the entire frame.

Frame 2:
The 8 x 8 character "sprites" are drawn over the 256-byte aligned buffers. Each large "sprite" graphic is stored in 143 reverse-ordered data bytes including color and line-padding zeroes. Some smaller graphic elements, like bullets, are drawn using hardcoded routines.

This uses something like third of a frame, depending on how many movable objects there are on screen.

Frame 3:
The 256-byte aligned background buffer is copied to the visible screen using speedcode. Again, this is 2K and takes nearly the entire frame.

During each frame the interrupt plays a GoatTracker SID tune and polls the joystick.

With this approach I balanced speed, memory and convenience. Especially I like convenience. The 256-aligned buffers are quite handy. When transfering the 8x8 character elements to the buffer, the writing address hi byte is INCed with self-modifying code to reach the next vertical line whereas X register handles the horizontal coordinate.

I already think I might have the graphic shapes erased with routines similar to drawing them, resulting in a faster screen clean-up. Also, I probably could use the X/Y registers without having to resort to the INC gimmick. But once I had my routines in place, I kind of prefer the 1/3 because it gives automatically a nice gameplay speed without having to slow things artificially. Convenience.

With the visuals, I took the easiest, black-background PETSCII approach. I noticed that PETSCII game visuals need a somewhat different approach than static screens: The overlaid "sprites" have to go well with the background without too large black outlines. I initially gave the main character a more rounded look as I would do in a picture, but this did not work with the background. I took most of the rounding off.

This not only influenced the character design but the backgrounds too, so there's more black empty space than would look good in a static picture.

The game is pretty much 100% written in assembler, unlike Fort Django, which still had a fair amount of C code in it. There is still a short C scaffolding for initializing stuff, but after kicking off the main loop it's all asm.

I now feel it's not that much more difficult as the assembler can work quite easily with "variables" and tables, and the X and Y index registers make it easy to have array-like structures for game objects. Using the stack to store registers, it's possible to have hierarchical subroutines and sub-subroutines for various tasks and associated labeled memory locations as "local variables" if need arises.

As the game routine operates most heavily in an invisible back-buffer, there are not that many unique routines and addresses in use. So I could convert the game fairly fast to plus/4 simply by changing the speedcode to point to plus/4 character and color memory addresses.

The joystick reading needed a bit more investigating, but it's not that much more complex than on a C64. I added a keyboard key reading too to switch the music on and off. Sadly, there's only SID support on the sound side.

I re-painted the graphics using the PETSCII editor's plus/4 conversion as a starting point. Some coloring was hard-coded to the source (tut-tut!) but not at too many places. The result is not that different from the C64 original, but it has a bit more shine here and there.

It's more interesting to see that the code runs roughly 30% faster at places, even without trying any plus/4 specific tricks. More could be achieved with plus/4 on this type of game, than on a C64.

I can also see that despite having twice as fast processor, it does not mean a 2x speed. But, certainly the 1/2 framerate might be a more realistic goal even without modifying the routines too much.

*** 28.12.2018 plus/4 addition: The speed-up I'm talking about is not really present in the originally released Plus/4 conversion of the game. I have made a speeded up demo for plus/4 available at the download links below so you can see the game running at 25fps.

However this is a rough-at-the-edges implementation and I have no guarantee it works well all the time. Also, as the game runs faster it may be less playable. The plus/4 is quite a neat computer!

I've wondered why I don't finish more stuff. It's not really about available time.

1. Become enthusiastic about a visual/logical solution for graphics and animation routines, which are at first built with care and reason
2. Start building the game logic with fundamental routines, still maintaining neat hierarchy
3. Lose momentum. Become bored and make new additions without much thought, adding stuff outside the existing hierarchy, generating potential problems difficult to solve later
4. Hastily wrap up. Instead of creating more gameplay & narrative, be happy with finishing the thing

If something disturbs the game within phase 1-2, it's possible that the project never gets completed. If it gets past phase 2, I can at least stubbornly make a finished piece out of it.

One antidote is to try to make the start/game over/finishing logic fairly early on in the project, so it's basically "finished", although there might be a lot to do on the other parts. This is something I did here.

No wonder games are sometimes pre-planned before coding anything. But I find it infinitely boring to try to design a whole game beforehand and then just code it, as lot of the fun arises from trying varieties and discovering things as I go along.

I'm also speculating that fatigue strikes because incremental work stages are boring. The first coding stages often bring an euphoria of seeing exponential results as a result of tiny amount of work or changes.

You'll need a Commodore 64 computer or a C64 emulator to play this game.