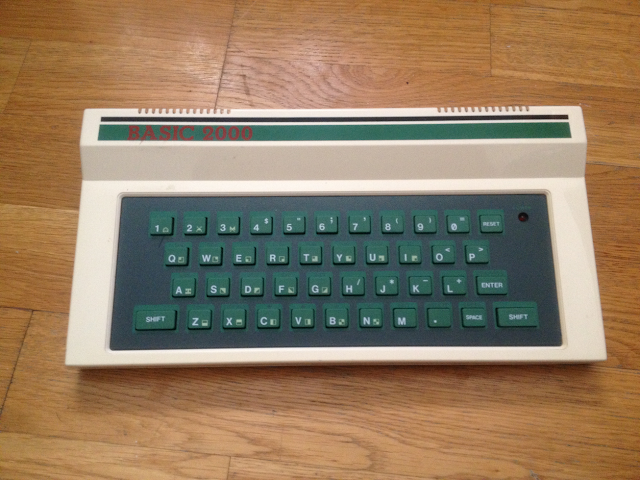 It's been a while since I have had my mitts on a properly old new hardware. What's it called? It's BASIC 2000 to me, but it's originally a Lambda 8300 from Hong Kong, known by many aliases in different countries. Furthermore, it's supposedly pretty much a ZX81 clone apart from the ROM, with 2K of RAM as standard as opposed to 1K.

Not completely unknown in Finland, I saw this once in a cheapo store, and maybe a picture in one of those tiny shifty-looking mail order catalogs. 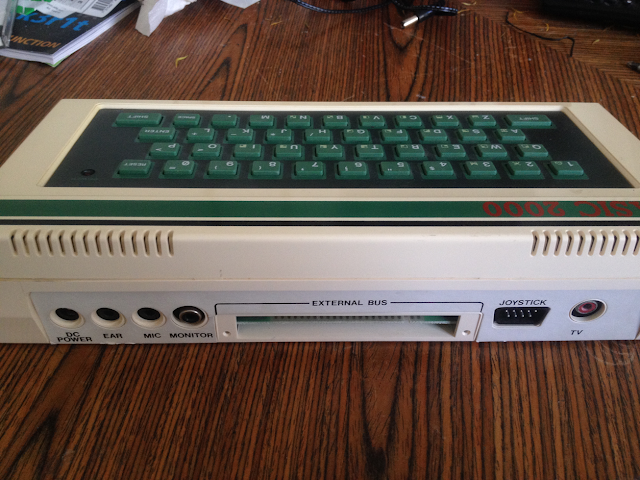 Obviously the rubber keys are a bit of an improvement over the membrane keyboard. Looking behind, there's an external bus, Atari-style 9-pin joystick port, ear/mic for tape storage, RF and a "monitor" connector, which is composite video.

Already the key graphics reveal some differences to ZX81 in the character set. There are 45-degree angle blocks, 2x2 pseudo-pixel blocks for a 64x48 resolution, and funnily enough, a "ghost", "space invader", "alien butterfly" and a "car" symbol. I think there are some Sharp computers that went the same route. Seeing as there are only 64 characters + inversions in the set, it's a bold move. The 45-degree blocks are a good idea but the checkerboard "grey" patterns have been discarded. 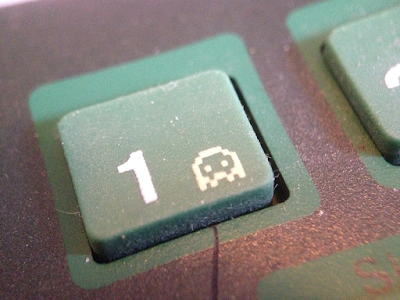 I opened the computer to get a superficial look at the board before booting up. (The seller made no big promises) Remove three screws and pull out the case top starting from the front. The clips from the sides have to be freed first, then the top part of the case is pulled towards the front to free the case from the back clips.

The layout reminded me a bit of Laser 200/Salora Fellow, but thankfully the circuit board is better quality, I'd say better than the ZX81. This time I didn't pry inside the keyboard part. 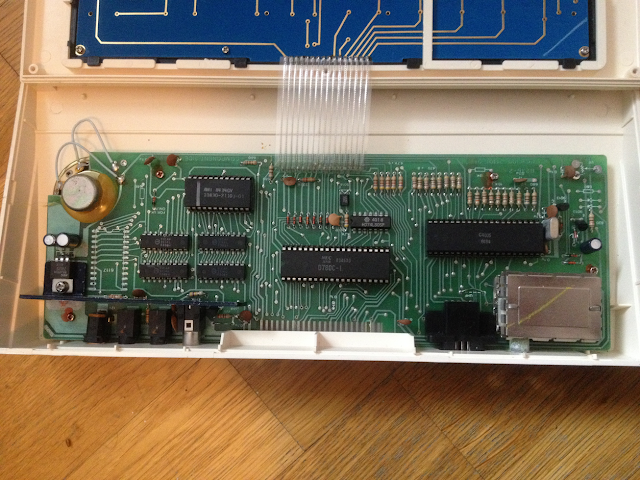 Booting up the computer (plug-in, no power switch) with a video monitor gave a beep and a "ready" prompt. Hooray! Yet the screen quality was poor with vertical stripes and I wondered if there was something wrong with the machine. However, comparing to screenshots available on the net this seems to be quite common. Turning brightness down and contrast up pretty much made the effect disappear.

The keyboard? The first hilarious moment made me think something's again broken in there: Pressing each key gave a different pitched warbling beeps out of the loudspeaker. Typing a bit further I realized each key has a distinct tone, meaning this is an intentional feature and not a fault in the hardware. The ZX81 is silent so this is another "improvement" over that hardware, proudly audible as soon as you press the keys.

How do the keys feel? Better than the ZX81 but maybe not as good as the ZX Spectrum. At least the keys work quite well after 35 years. Some functions might be in better positions than in the ZX81, such as the (shifted) cursor and edit keys. A dreadful thing is the "reset" key next to the 0 key which I have often mis-typed. Thankfully it does not reset the computer, it clears the current status a bit like Run Stop+Restore combination does on a Commodore 64. 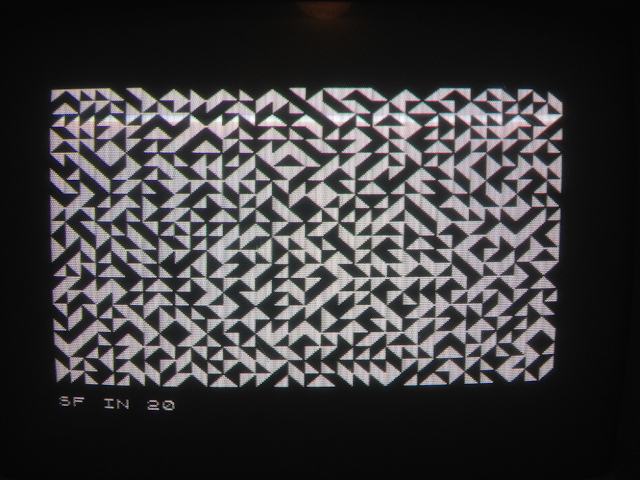 I managed to type in a tiny 10 PRINT... inspired graphics piece, which uses the 4 diagonal symbols just to produce something that's characteristic of this computer and not the ZX81.

Considering a chess program was once written for ZX81 with a length of under 700 bytes, the 2048 bytes of RAM must have been a luxury. 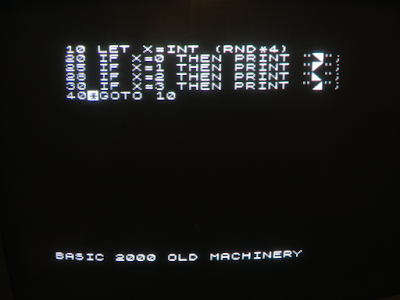 Despite slowness, the ZX81 version of Sinclair BASIC is already quite neat and goes to show a full-screen editing is not always necessary. The BASIC does not take in Sinclair-style single key keywords, which is sort of refreshing.

However, commands cannot be separated with a colon character, in fact the character does not even exist at all in BASIC 2000. This makes IF - THEN constructs sometimes a bit of a chore. Then again the programs never grow truly large so it hardly matters. 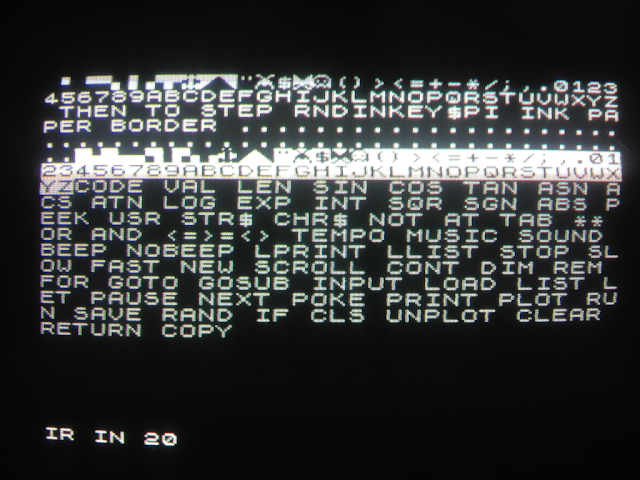 Above shows the BASIC 2000 character and command set, a result of a PRINT CHR$(i) loop. TEMPO, SOUND, BEEP, NOBEEP are interesting as the ZX81 had no sound at all. The typing beeps can be turned off with NOBEEP. As in ZX81, FAST and SLOW commands can be used to turn screen update off and on to improve computer speed.

The image below compares the ZX81 character set with the BASIC 2000 set. The changes are minimal, a different font would have given a more distinct feel to the computer. My problem with the game graphics is that the usefulness of the inverted versions have not been thought out very well. Interestingly, not only the colon but the question mark has been abandoned. 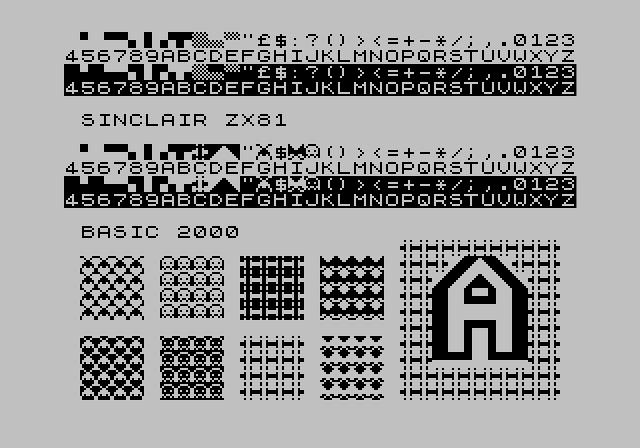 The hardware improvements makes this a bit nicer than the ZX81 but the software incompatibility and lack of the Sinclair brand aura loses it some points. But it's not the complete piece of trash I expected it to be, typing little programs is quite comfortable soon as you turn off the beeper and get adjusted to the pace. It seems this computer was really meant to be a very introductory kit for, you know, learning BASIC.
Posted by Tero Heikkinen at 16:18