I was asked to do ULAplus extended ZX Spectrum graphics mode support for the Multipaint painting software.

I was initially reluctant. Multipaint supports only the most established and "culturally recognized" modes, and I've not bothered to make C64 FLI/AFLI modes either, and they don't even require new hardware.

But I then saw that some images might actually come out of it, and seeing as I already own hardware that can display the mode (ZX Evolution) my curiosity grew. It's a challenging mode to work with, and Multipaint might help here.

I suppose a fairly huge proportion of currently active ZX Spectrum enthusiasts would be at least aware of the ULAplus mode. Although there are many modded and patched games and converted images that use the palette, the lack of editors and paint programs means Multipaint could even fill a niche here.

I'd usually prefer to release things before discussing them, but here I'll make an exception as there's a bit more to digest than usual.

In addition to the already mentioned ZX Evolution, I know about a ZX-UNO computer that has it. Then there is the SLAM drop-in ULA replacement which works on 128k or a +2.

A HDMI video board called the TK-Pie appears to promise these modes too. 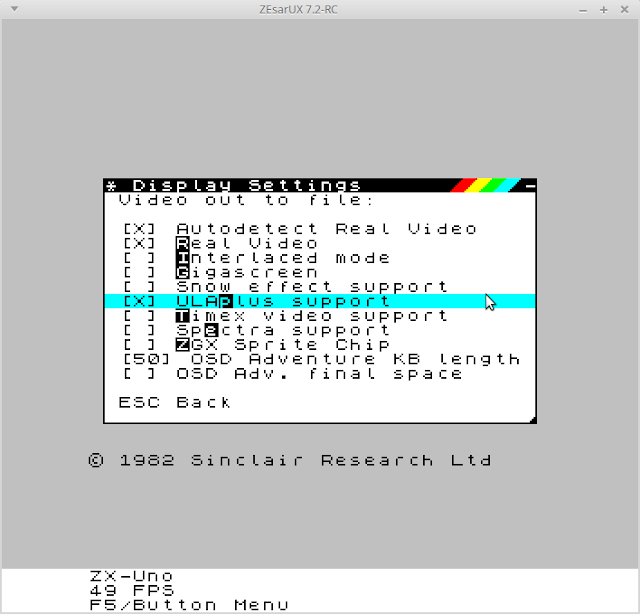 Emulators also support the mode. I couldn't get my Linux Fuse patched to support it, but I have the mode working on ZX-UNO emulation within the ZEsarUX emulator. There I have to switch the mode on in the Display segment of the settings menu.

I had to update the firmware of my ZX Evolution to make this mode work. The firmware you get from one of the nedopc pages is not recent enough, so I went to GitHub and downloaded the latest zxevo_fw.bin and zxevo.rom. (Go look for the ROM at pentevo/rom/bin/)

I cannot guarantee this is the best option for your ZX Evolution, but at least I have my ULAplus mode working on a hardware speccy.

Upgrading the firmware was easy as I have my Evo inside a mini-ITX case. Wired correctly, I can then copy the zxevo_fw.bin to the SD card, and simply hold down the "soft" power button while plugging the cable in. The power LED flashes a bit and the firmware has been upgraded. These days the ZXevo ROM can be updated from within the baseconf service and it is a good practice to have both the ROM and the firmware updated at the same time.

ZX Evolution does not have a full ULAplus mode, it omits the difference between 6th and 7th level of the Red and Green components. So it might be something to consider when making graphics on the ULAplus.

Here I focus on how ULAplus works in practice and what it might mean for someone using Multipaint, although it's not yet definite how it will work.

ULAplus is clever in that it does not make the Specrum incompatible, it simply changes what is done with the memory bits that make up the display file. So, I'm only talking about the most standard mode, which has the same old resolution of 256 x 192 and the 32 x 24 attribute resolution with 256 colours to choose from.

The attribute "clash" is not removed, there are still two colours inside an 8x8 area, and much like with the ZX Spectrum there are rules to how these colours can be chosen.

But as there are more colours and they can be combined in more flexible ways, the look of the graphics can be changed quite radically. I'd go as far as to say the ULAplus experience proves the colour clash wasn't such a huge problem with the original ZX Spectrum, the limited colour palette was.

Here's a diagram that may be more confusing than helpful, but let's try it out: 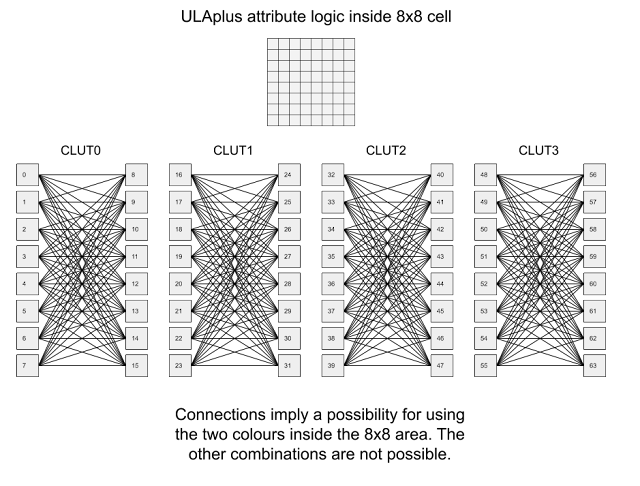 -There is an index of 64 colours.
-These 64 colours can be adjusted with RGB sliders from a total of 256 colours. It is a kind of semi-9-bits RGB palette.
-The 64 colours are really four sets of 16 colours. No colours from two different 16-colour sets can be mixed inside the 8 x 8 area.
-Each of the 16-colour sets are further split into two subsets of 8 colours. The colours inside the 8x8 must be from a different subset. ("INK" and "PAPER")

Just as in the normal ZX Spectrum mode, Multipaint does not care which colour is INK or which is PAPER. This is why I have described the mode in a bit idiosyncratic way.

The internal workings can be partly forgotten by the artist, but still ULAplus is more complex than the ZX Spectrum limitations and it would be better if the artist understood these rules.

My starting point for the ULAplus Multipaint engine was to first prevent any pixel drawing operations that cannot be done, and then attempt to fill in the gaps with some helpful intelligence, without going overboard with this "helpfulness".

The 16-colour set is technically called a Colour Look-Up Table (CLUT) and I will now follow that terminology here.
So, if the pen colour is from another 16-colour set (CLUT) than the colours underneath, then Multipaint likely won't allow you to draw on it.

If there is no diversifying pixel information at all within the 8x8 cell (it is filled with 64 pixels of the same colour) and it is not legal to draw with the current pen colour, it will be "primed" by Multipaint with the chosen colour. The area will also belong from that point onwards to that CLUT.

However, if the pen colour is legal the pixels will be added on that square and from that point on it will have two colours in it.

So, two different halves of a CLUT combine to make the colours on the same 8x8 area. It doesn't matter which colours or bits are there internally, just as long as you use the same pen colours that already exist on the area, it will work.

Multipaint allows a small detour here: If there is a way to resolve the drawing operation by using different colours from the same CLUT, this will be attempted. If this won't work, a possible combination will be sought from another CLUT.

For example you might have the colour black (0,0,0) in both sides of the same CLUT, this would facilitate drawing black easily on any colours that belongs to that CLUT without having to pick the correct colour everytime.

Also, if you want to breathe freely and have 8 colours that behave like the Spectrum with no CLUT nonsense, define the colours 8-15 same as the colours 0-7, and draw away!

Importantly, the palette will be visually separated to show the 16-colour sets as rows. The artist ought to internalize the idea that the colours within an 8x8 area have to be from within the same CLUT, and from different "sides".