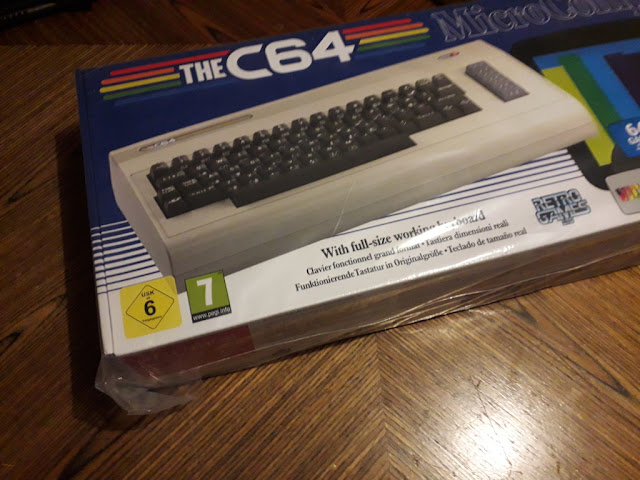 The C64 Microcomputer! I didn't get it for Christmas, but it's close enough...

The first physical impressions are good: it weighs more than you'd expect for something that is basically an empty box. The keyboard has a nice enough feel although it is a bit clunky and gives a somewhat "hollow" sound. I wouldn't know how pristine C64 keyboard might have felt straight out of factory gates, though. 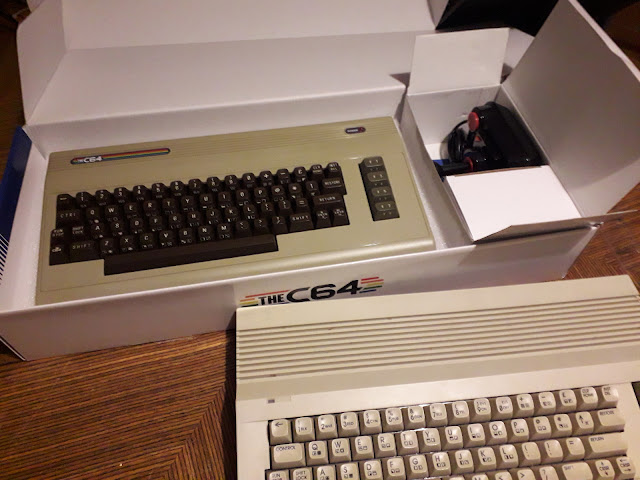 Connect it to the wall with Micro-USB style power connector, connect to TV via HDMI. Insert the included joystick using one of the four USB connectors and you can go. The cables are all included.

(The box I think will be used for storing a real C64. A plastic dust cover is included.)

A few seconds after turning the power on, the computer boots into the games carousel mode. So it should be very easy to use. Select a game and play your emulated C64 classics. 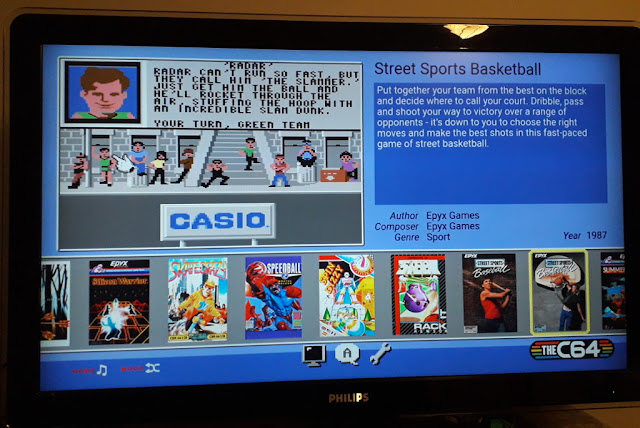 Your own software? Simply insert a USB memory stick and if it has d64 files in it, it will be listed in the media menu. Then run the first file on the disk by using one button, or do the LOAD "*",8,1 manually from BASIC in the "Classic" mode. So it couldn't really be much easier.

All the menus are accessible from the one special button on the joystick, which is a surprisingly handy addition to the emulation environment. Whether this means you need to have the joystick connected all the time I'm not yet sure. (Edit: No, you don't)

The menus are clear and have pretty much all the options you'd expect from a consumer-oriented box, but not much more. 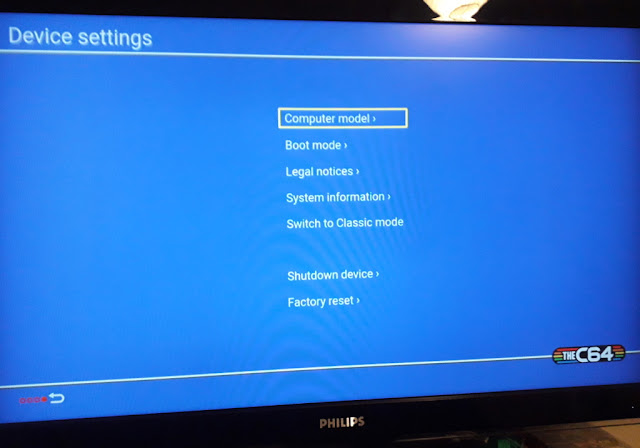 The computer can be made to boot directly to BASIC ("Classic Mode"). From the power on it takes roughly 15-20 seconds. But the subsequent resetting & loading new games etc. does not need this time at all. Games when launched from the carousel take only seconds.

The games and music run too fast, and this was NOT fixed by just changing the PAL/NTSC mode. I am guessing that the television goes to 60Hz mode and it is not for some reason able to use 50Hz, as The C64 gave no boot option for it, as stated in the manual.

Edit: Turns out The C64 decides this for itself, if the TV video mode has not been yet initialized. I did a factory reset, turned the TV on properly before The C64, and I got the 50hz/60hz question after boot.

This is a pity as the very same TV is able to show a real C64 image via SVideo! I tried to fiddle the crappy menus of this fairly old Philips flatscreen TV but to no avail. Although the image appears to be 720p video format and the TV should be able to handle in 50hz, it doesn't do it.

So I am still somewhat willing to blame the TV instead of The C64 here. 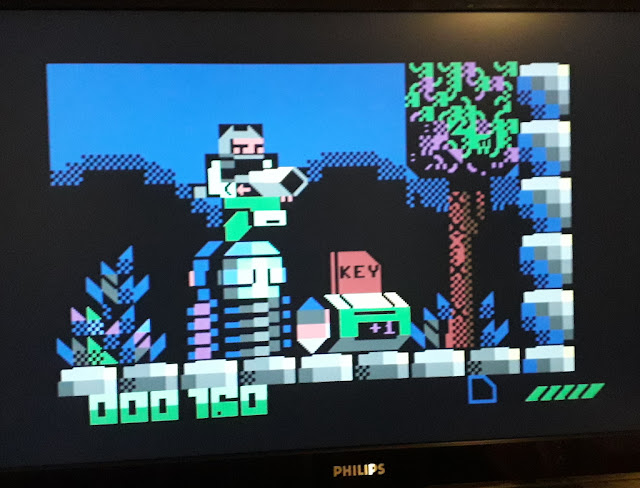 Which brings me to the slight real omissions. There's no Composite connection so I'm stuck with the HDMI. Also no separate audio jack. For someone else these might not be a problem at all, but the composite video would have been a really, really good feature.

Scrolling seemed to be smooth and tearless whenever needed, but I'd have to make some more definite tests before giving my final verdict on that. I had no problems with the games included. Edit: I tried the Giana Sisters attract mode scroll and it seemed to give no tear or hiccups.

With the Competition Prof-esque joystick I could not really experience much lag with the games, until I really focused on the issue.

Oh, by the way the software offers a variety of aspect ratio/display blur modes so you can get the screen look correct on a widescreen TV. 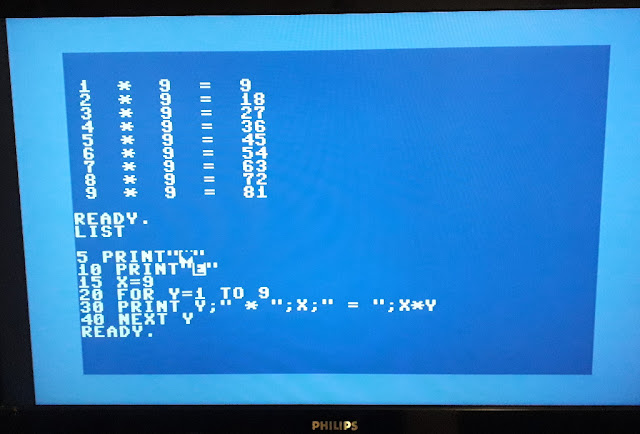 The keyboard was good enough for typing the above small code snippet, even in the somewhat cramped conditions I had. The shift lock key does not lock physically, but the state is visually indicated in the screen corner. The run/stop + restore combo works.

The keyboard and the PETSCII markings on it are things that clearly elevate this product above a common emulator. The keyboard responsiveness is maybe not as immediate as one could hope, in terms of time between keypresses and the characters appearing on the screen. But at least no typing got lost in the process.

There are two extra fire buttons on the joystick and the 4 extra control buttons. As mentioned, one of them accesses the emulator menu. Funnily, two of them map to Y and N keys and the third to return. Possibly these can be remapped.

My immediate verdict is on the positive side, even if I had some hiccups here. Unlike with some retro products, I don't get the impression this is a cash-grab. It's within a reasonable price and tries to cater to the slightly more advanced users and not just games players.

Yes, for the price you could get a second-hand real C64, but getting all the needed peripherals would likely make it more expensive.

I might get back later with more detailed examination of the features, such as the VIC-20 mode, cartridge files, different displays and the more advanced file-naming and setting options.

The HDMI turned out to be a bit limiting, so I wondered if a conversion could help here.

I bought a cheap Deltaco brand HDMI->VGA converter with separate 3.5mm audio out. I used the VGA to connect it to a Dell display and the audio to a small JBL chargeable loudspeaker.

I am somehow suspicious of HDMI and especially HDMI conversions, but I was initially pleased that this worked at all.

I also got the speed to 50hz, judging from music playback speed. However, testing the scroll with Giana Sisters it is no longer smooth but a bit jittery and tearing. Sad but perhaps I should not have expected that much from this.

EDIT 24.1.2020:Another edit! So of course the jitteriness is because the display does not handle 50hz, but it attempts to conform to it anyways. However, if I again do the factory reset, connect THEC64 to the VGA display with the Deltaco cable, I get to choose 60hz. Yes, this is "wrong" speed for C64 but at least it was again smooth. Some games might even benefit from it a bit :)

So, it goes to reason if another similar display could handle 50hz the adapter might work fine, so perhaps I should not blame the Deltaco adapter.

Scaling is not that bad, but I had to turn off the CRT scanline emulation as it produced a kind of mild screening artefacts when scrolling vertically.

The picture was not initially centred but this could be adjusted from the monitor settings. 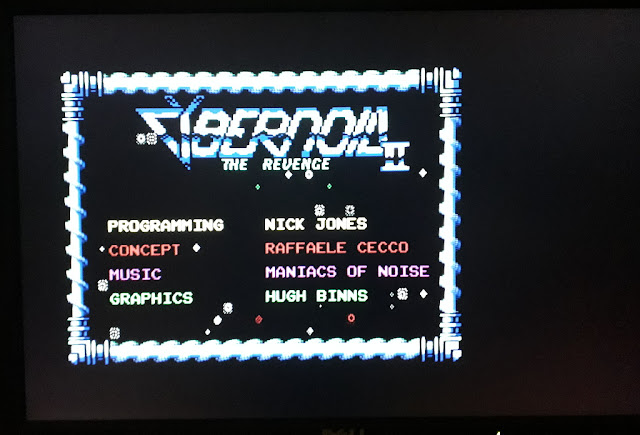 It only now occurred to me to ask, where is the SID selection?

Now with bunch of cables, added visual artefacts and jitteriness, I'm not sure if this setup is so handy after all, compared to the HDMI TV. But, it has to do in a situation where nothing else is available.

This 4€ adapter did not result in an image at all. Firstly, it barely fits with the power cable and the memory stick at the back, and secondly... well, as I said no picture. So I guess even though THE C64 might be based on a 'reduced PC' it can't handle this. The adapter does not have the sound splitter so even if it did work here it would not be that useful to me.
Posted by Tero Heikkinen at 18:40