The customary look-back into the year.

Apparently I'm concentrating on fewer and fewer platforms. The year was quite Commodore 64-centric, such as toying around with THE 64, 1541 Ultimate II and casemods. More recently, I've worked with the BMC64 Raspberry Pi C64 emulator again.

I did a bunch of 6502 code but only a little of it has seen the light of day. I did release a small videotester for C64, though. PETSCII graphics is small enough to do occasionally. Also I made a couple of tiny demos based on PETSCII, such as the Petmanbatman and Advanced Pet Dragons. 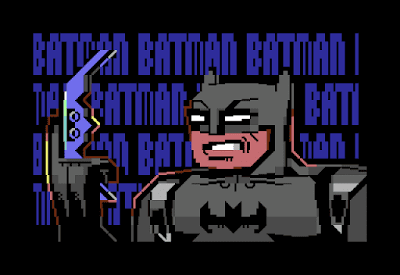 I also got a PETSCII piece out in a paper publication, Kuti #57.

I've done less pixel graphics. I prefer to draw fast and that's hard to reconcile with the pixel aesthetic. Compared to PETSCII it feels time consuming and the results are not that different.

Multipaint got the inevitable 2020 update with transition to Processing 3 and resizable windows. Possibly it finally works reliably on a Macintosh. I'm perhaps hoping to put less time into this project and the 2020 version could be one of the last big overhauls. Many tiny improvements are on the to-do list, though.

On less retro front, I've been playing with a server, more and different Linux installations, a "new" mac and with some help I'm getting to know my way around these systems. Even Raspberry Pi looks more attractive now that I understand more about Linux than 5 years ago, and maybe it's a platform to look at more closely in the future.

Mostly thanks to Proton, I could enjoy new games in 2020. The biggest game I completed was Just Cause 3 which worked nicely on Linux. A very enjoyable and not too long open world destruction romp.

I couldn't finish Nier:Automata, but maybe will return to it eventually as it had some quite impressive parts. It also glitched more on Proton than Just Cause, but was playable.

Some of the smaller games were Lonely Mountain Downhill and Saboteur Sio.

Lonely Mountain was incredibly addictive at first, but when I got bored I got totally bored with it. Perhaps less routes and bikes might have been better so I would have had more genuine motivation to optimize the courses, like with Stunt Car Racer.

It amuses me now how I initially dismissed Surviv.io, a game I first tried at the end of 2019. Then I played it for most part of the year and still play it. The overhauls to the login system and various outages almost put me off it, though. I'm now better at it but even now the results seem more to do with whether the really good players happen to be on-line or not, rather than my inherent skill. Outright cheating/hacking may have diminished somewhat at least.

Chess is still on the playlist but I've been concentrating on it a bit less. I make this complaint every year, and I'll make it again: I feel I could improve if I put even 30 minutes into it every day, but that measly amount would feel too much to dedicate. I did manage to play about 1000 games this year, although mostly blitz on Lichess. Slower chess would be nice but the time use is even harder to justify.

For films, the year 2020 was more about re-watching rather than covering much new terrain. Tenet was a memorable film but perhaps not the bullseye everyone was hoping. Well, amidst the worst Covid-19 stupor, this film had begun to gain a messianic promise which it really could not fully deliver.

Doctor Who continued, the episode ideas were good but the writing overall had some problems. No reason to stop watching, though, it's still solid TV sci-fi. In some ways I'd compare it to the first season of the new Who, an attempt to keep the episodes self-contained and finding ways to renew the mystery of the character.

Westworld season 3 started with a bang, what the season 2 ought to have been. But it begun to veer away from the Westworld concept and overall was a puzzling addition to the series. I guess it was meant to deliver the idea that we all live, or are about to live very soon, in a sort of "westworld". As a detail, a lot of people got shot from a close distance in a random and nonchalant way, something that got boring very quickly.

The 100 came finally to an end, a not so high-profile series that over the years has had its ups and downs. I often felt it built upon watered-down themes from bigger series (Game of Thrones, Hunger Games) but it had its own voice too. The confused last season perhaps took some story-telling elements from Westworld.

The Mandalorian was probably the best Star Wars related thing in ages, but it also reminded me of how bloated the whole SW phenomenon has become. There's a lot of verbal/visual in-jokes and meta-gags, which the series can now afford as there are so many layers to the SW verse.

The Queen's Gambit mini-series was a fascinating story about chess and a nostalgic look at 1960s US. As a TV series it was able to give more detail to the games and the chess player's practice than films usually do. Given how popular it has been perhaps there will be more chess-themed shows.

As for books, I also kept revisiting the old rather than reading much new things. Well, when I was somewhat ill I did go through Suzanne Collins' Hunger Games trilogy and Stig Larson's Millennium trilogy, pieces of past zeitgeist I had previously ignored. I made a point of reading the Asimov Foundation/Empire/Robot novels in a chronological order and a blog post about it is still in the works.

I'm hoping to continue with business as usual. This blog will have its tenth anniversary in June!