This looks like a year for the Raspberry. Or the Amiga. Or both.

I already told of my experiences in using Pi/Amibian with a new-found cheap TV (see last post). Although the picture is not the most satisfying, I'm going forward with it.

First, a look at the Raspberry Pi case. Another time I will make a few notes about the Amiga Workbench/Amibian install itself, which is already up and running.

Obviously I can use the case as a Raspbian computer too by just switching the SD card, but the Amiga emulation was strongly behind this idea.

Already a couple of years ago I salvaged a very cheap digi-TV tuner, because the case looked like it could be used in a project. I now thought it would pair nicely with the TV, so I finally drilled and cut holes to make the Raspberry Pi fit. 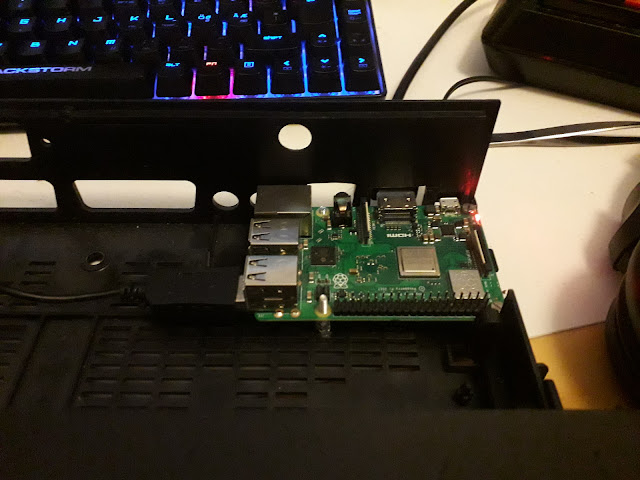 The Raspberry is annoying in how the connectors all point to different directions. This was slightly improved with Pi 2 but there are still three important directions: Power/Display, SD card and the USB/Ethernet.

With an ancient Targus USB-hub, which I also used with this old wooden casing project, at least the USB ports can be redirected elsewhere.

So I only need address two sides and the Raspberry can be placed in the corner. 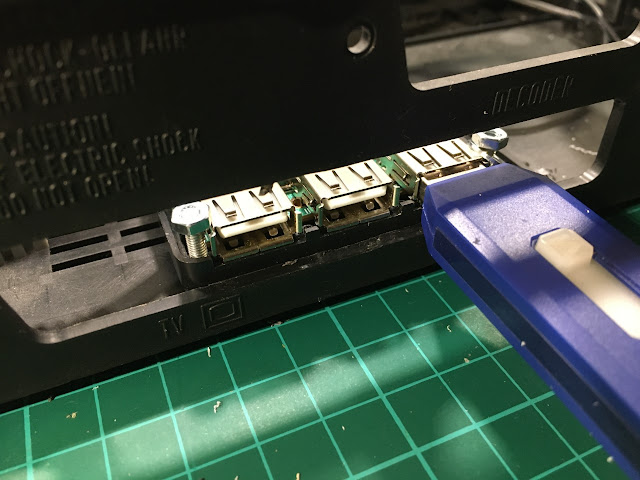 I had considered putting the memory stick inside the case as an "internal hard drive". However I use the same stick in the real Amiga 500 Gotek drive, so I need to be able to move it quickly.

Although the USB hub has four outputs, one of them points in the opposite direction. After a mouse, keyboard and a memory stick, there's no room for a joystick. I found a very short extension cable which helped me get the fourth port out. It's perhaps good one of the ports is not part of the hub.

The single USB cable was more difficult to attach than the hub. The USB connector has those flaps which means it can't be simply pushed through the hole it is meant to occupy. The flaps also help keep it in place so they should not be removed either.

I made a rough test with two chipboard pieces in a wide "U" shape. The "U" shapes interlock and keep the connector from being pushed in.  I was afterwards happy enough with the solution so I didn't try to improve it for now. Three layers would be better as two can't keep the connector from wobbling.

The small existing rounded opening marked "12V" could be a better place for this connector, but I wanted to try this in the most spacious location.

Looking from the outside, it also gives an idea how the other ports might be cleaned up. 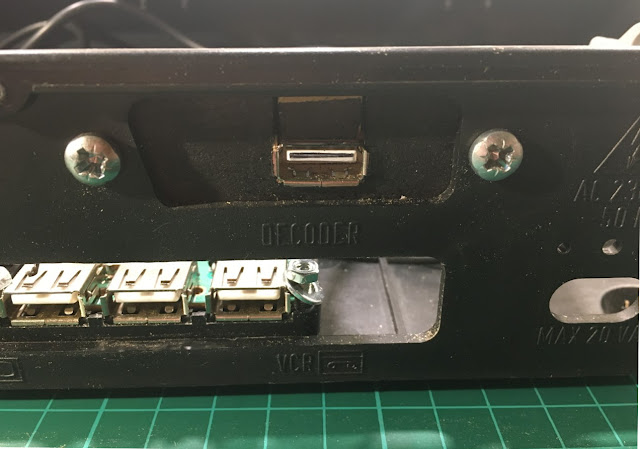 The material of the backside was pleasant and clean to drill and cut, which shouldn't be a surprise as it is clearly meant to be cut into different configurations. It looks as if the "decoder" hole wasn't very accurately cut to begin with.

A nice change after all those wood and chipboard projects. 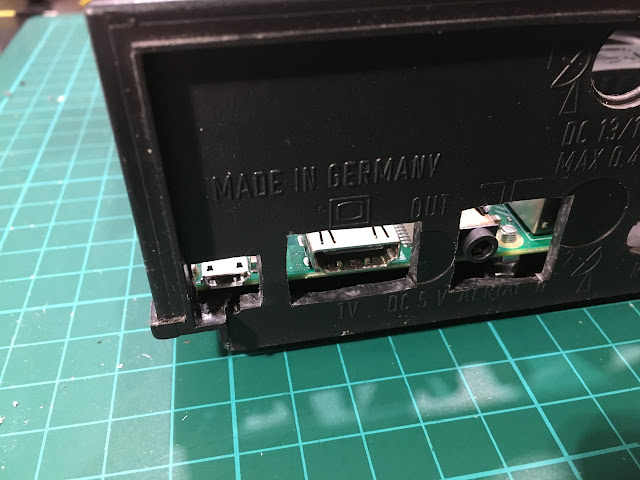 One more woe is the minimal micro-SD card, and even now it's not protruding more than 1mm. I don't have a clear picture to show here, but the Raspberry is positioned so that the card comes out just below the metal cover edge.

I don't really need to remove the card that often as the emulator files are on the removable USB stick. I can use tweezers to pull the card out if I want to.

To have a better access to the network connector I used a short extension. Again something I did with that old wooden case.

The RJ45 "gender changer" is plastic so I made a groove around it and inserted it without any additional fasteners or screws. 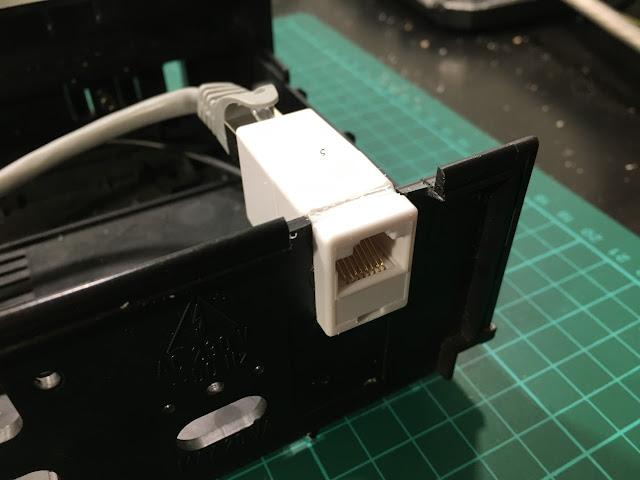 I recently learned the Raspberry Pi 3 does have an internal wireless network adapter, but this felt more secure than trying to build an antenna.

Time to put it all together. What's nice about this box is the metal cover can be fit into place without screws really, but I can also use two hand-rotatable computer case screws. 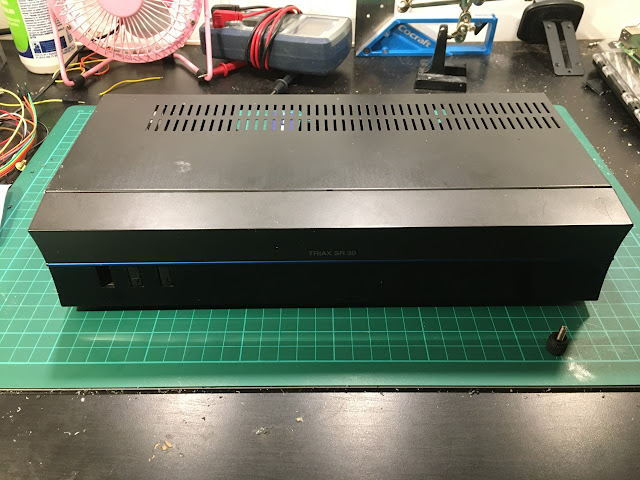 So, that's it. The front side of the case is not very impressive, as it is a TV tuner box after all, but at least this time I didn't start the project with designing a front panel. Perhaps badges and stickers here...

The buttons at the front do nothing and could be hidden.

As I said, different types of Raspberry installs could be used here, and not just the Amibian, so I may need to consider this angle too.