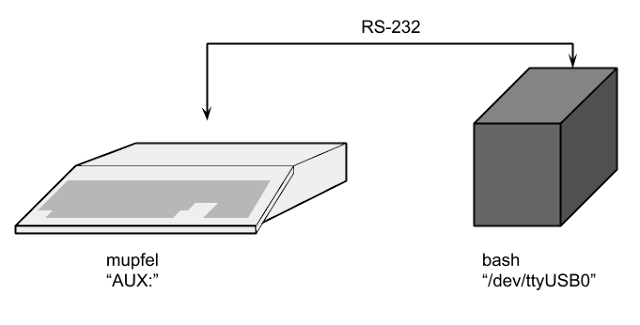 A continuation of the Atari Falcon/ST file transfer topic.

I've found Atari terminals to be clunky and none would do exactly what I'd want them to. Ansiterm fared the best so far, the terminal is good enough for using the command line remotely, and a Zmodem transfer will be automatically recognized when using sz from Linux end.

However, on the minus side it's one more program to launch, necessitating video mode adjustment to ST-LOW and setting up the xyz.ttp. This also distances you from the Falcon end of things.

Although this was an ok solution for one longer session, I didn't exactly like to access my Linux command line through a terminal.

As long as I can use a command line shell on the Atari end, I should also be able to call up a file via that command line. Previously, this meant launching xyz.ttp at Atari end and then typing the sz at the Linux end.

Now I tried a fun way to improve this a bit.

At Falcon end I have used the Mupfel shell, which is bourne-like enough for doing relatively complex scripts and redirecting of input/output.

I could make a small script that sends commands to the Linux by serial port, activating the sz Zmodem transfer and running the xyz.ttp Zmodem receive program at the Atari end.

But it took a while to get the Mupfel shell up and running properly, as I couldn't find that much information about how to use the shell.

Then it struck me that as the shell is a Bourne clone, people must have assumed it's nearly general knowledge anyway. So, after reading some sh guidance...

If the program file mupfel.ttp is at D:\comms\mupfel then the shell expects to find a file called 'profile' from there.

The above is an example of my 'profile' which connects various programs with aliases. The line with PS1='%p> ' makes the prompt a bit friendlier, showing the current path.

I use MicroEMACS for editing text files inside Atari, there are not many options for editors that would work well within the Atari shells. If only I'd find the way to bind those arrow-keys...

MicroEMACS requires that the environment parameter TERM is not empty, so I have 'VT52' there. Suffix should tell which files are executable but frankly it doesn't seem to do much. Not sure if LINES/ROWS are meaningful to any programs.

Well, off to the file-transfer-mobile.


The 'get' script at Atari

D:\comms\mupfel\bin\ is a good place to put a script. Mupfel scripts end with .mup extension.

From the command line, doing

sends characters to the serial.

Saving the following as get.mup

is enough to send over a 'command'. The characters 'get ' are sent, followed with the argument passed from the command line, and after that the shell runs xyz.

Here in my case xyz is an alias for xyz=c:\xyz202b\xyz.ttp as defined in the profile above. I guess the 'get' could be an alias too.

I spent some time making a Processing sketch that reads the serial input, sniffed for that 'get' statement and used a system call to send the required file using sz. Clunky but it worked.

However, after a bit of a think I felt this could just as well be done as a Linux bash shell script.


The 'server' script at Linux

At my Linux end, I can use a script somewhat like this:

echo "Serial is on"
echo "use get at Atari"

The script sets the serial port to 57600 and waits for a line of characters to arrive via the serial.

After such a thing arrives, the string is split using spaces between words. The first part will be the 'command' and the latter part a 'filename' for that command.

If the command is seen to be equal to 'get' then zmodem send (sz) is launched to send the file, with a filename based on the second part of the line received from the serial port.

In the meantime the tiny get.mup script at Atari end ensures that xyz202b.ttp is launched, waiting for the Zmodem transfer.

After the file has been transfered, the Mupfel shell resumes normal operation while the script at Linux end is looping another cycle, waiting for further instructions.

So, typing get /home/user/Downloads/atarifile.zip on the Atari end the file will be received to the current folder.

I added a 'put' command for uploading files from Atari and a 'say' command for simply sending a bunch of characters to be displayed, for testing purposes.

and the respective portions to be added to the Linux bash script:

Now, it might be handy for the Atari to be waiting for the files whereas the typing stuff is done on Linux? How to do the opposite of the above?

I had to take a bit different approach (it's not bash) but in the end I got it working on the Mupfel shell.

(I preserved the command/arguments split although I don't do anything with the arguments really.)

Running this, it becomes possible to use the send commands exclusively from the Linux end and the files will arrive at the folder the script is run from.

I had some trouble breaking out of the loop so I added the 'end' command just to be able to stop the shell from outside.

Also, at least in this form the 'read' tended to take in the Zmodem control characters etc. and got into a mixed state having received bunch of codes but no newline. Sending a bunch of lines after the serial send sort of clears the situation, but also produces glitchy-looking messages.

Although a nice exercise, having the 'server' script at linux end might be the better solution after all. Running that script is no problem for that box, whereas the Atari would be tied with running that one loop.


Afterword
By the way, another Bourne-esque shell I dabbled with for a while is called Okami, which was good enough for launching that xyz.ttp, moving and exctracting files around. A bonus is that it's able to launch GEM programs, something Mupfel won't do.

The earlier version of Okami may be recommended, although it is a bit lacking. The later versions appear more comprehensive but they were buggy at least on my Falcon so it was virtually useless.
Posted by Tero Heikkinen at 12:41