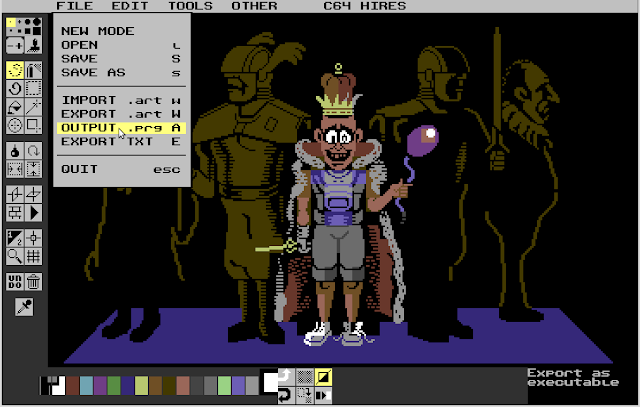 Multipaint 2019 has been long in the making, but there are quite a lot of tiny and bit bigger new things.

In this blog post I'll discuss some of the new features and add background detail that wouldn't fit the webpage and the manual.

The application window is no longer scaled according to the chosen target platform.

The uniform sized application window helped me get rid of the java-based dialogue box when running the application, and you will see an in-application menu for choosing the platforms. 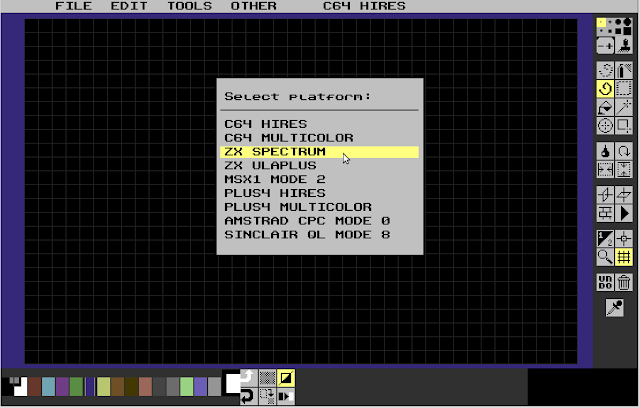 Because of this it's also possible to change the platform (FILE / NEW MODE) on the fly, so you don't have to re-run the application just to try a different platform. Don't expect it to convert your images on the fly as yet.

In the future Multipaint will likely suggest a mode change when loading a file for different platform, it's no longer hard to do but I didn't want to do the testing now.

I have removed the application window zoom size 1 (mini) from the prefs, as supporting it became a bit problematic. Tell me if you really, really need it.

There are now more tricks to access the "prefs.txt", this may help Macintosh users who have had problems with the preferences. If Multipaint is run from terminal, it outputs file-related messages to the console, hopefully helping solve these problems in the future.

Overall the program might not be as fast as before. I changed some convoluted code to something that is easier to handle, but likely a bit slower. I was also reluctant to optimize the all-new window and menu drawing routines.

Multipaint 2019 imposes some (conventional) rules for increased safety:
A page is  “unsaved” if a tool has been used on the page, it's currently no more clever than that.

The UNDO limit may sound like an overkill but it's been the only real source of lost work for me personally. Some have reported lost work due to clicking wrong icons or window close button accidentally.

NOTE: As much as I tried, I could not get Processing/Java to reliably bypass the window close button on the exported application. The work on this continues.

There are more magnify levels (5 including the full view), making the mouse wheel magnify much more fluid. It should work a bit more like you would expect in this type of program (e.g. Krita) and to me it has quickly become the standard way of zooming in and out. The old magnify tool icon and magnify keys work like they did before.

I'd go so far as to say a two-button mouse with a wheel (doubling as a middle mousebutton) is the optimal tool for using Multipaint. Well, at least that's what I'm using all the time. However, the new style interface means the program should be more useable with a drawing tablet (wacom).

I cautiously added an auto-scroll for the second phase of two-phased tools such as rectangle and line. So, if you drag these tools outside the entire Multipaint window the mag window ought to scroll a bit. I'll probably improve the panning options in the future.

You can now reset your tool options by pressing SPACE. This means if you have a cluster of switches on (mirror, recolor, dither etc), and you are not quite sure why you can't draw properly, just hit SPACE and you will get back your one-point, one-color brush with all the switches off.

Multipaint 2019 introduces drop-down menus, much like in Amiga Deluxe Paint. (Or nearly every other application for that matter!)

With the new menus I can add options and dialogues for functions that have been a bit too well hidden. In the future, the dialogues also help in adding features that would not fit well within the icon/keypress logic. It's also a way to divide the immediate drawing tools/switches and the other functions. 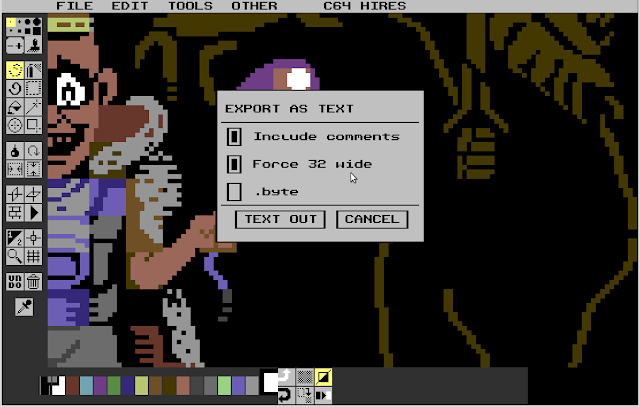 Currently the menus don't do that much as I am a bit wary of crowding them with options. Also, a bit more planning may be needed for the new dialogues. As a sort of demo what will happen in the future, the Text export now opens a dialogue for export options (that also have been improved a bit).

The main toolbar can be flipped, it can be on the left or right hand side of the screen, using OTHER/SWAP SIDE. DeluxePaint had the menus at the right but most applications these days seem to favor the left side. To me the left-side felt quite natural. You choose.

As file options no longer have icons, I got more room for the remaining icons. I gave some padding around them and their groupings, which could again be helpful for drawing tablet users. I might consider reducing the amount of icons further, or making even more clear division between drawing tools and the switches.

Some functions are now in a more standard location, for example the Load/Save/Export/Import icons can be found from the top left FILE menu. Keyboard shortcuts work as usual.

Although redundant, Undo/Redo and clear-all can also be found from the menus for added comfort.  Also, select border/background etc. are added to the menus as they were not very visible. Clear background comes in two varieties, using 1st or 2nd color.

Quick flip is accessible from menu, so the image can be viewed as mirrored.

Two Commodore 64 alternate palettes (Pepto and Colodore) can be quick-accessed from the menu. Custom .ACT-format palette files can still be loaded using the Load menu option.

I added the Pipette tool as an icon, as people tended to think it does not exist at all. It does help drawing tablet users I think.

The biggest addition is the ZX Spectrum ULAplus colour enhanced mode, based on the ULAplus specification by Andrew Owen. The current ULAplus support is limited for the ZX Spectrum 32 x 24 colour resolution, and not every idea in gestation could be included. In the future, I might support the "timex" 8x1 mode.

I hesitated to add ULAplus as I've previously avoided any 'special' modes. ULAplus was interesting and compatible enough to do and has some actual support. I'll possibly discuss this in more detail in near future. Let's just say it's not an easy mode to work with!

Sinclair QL mode 8 has been promoted from a semi-supported platform into a "fully" supported platform. The mode has an approximated flat aspect ratio that cannot be turned off. I added this mode mainly because I have grown so fond of the QL.

More importantly, the QL mode represents a small step towards supporting some low resolution 16-bit modes (Atari ST 320 x 200). I've resisted this in the past as Multipaint does not really have the type of tools and interface for handling them in the best way, but the day is getting closer.