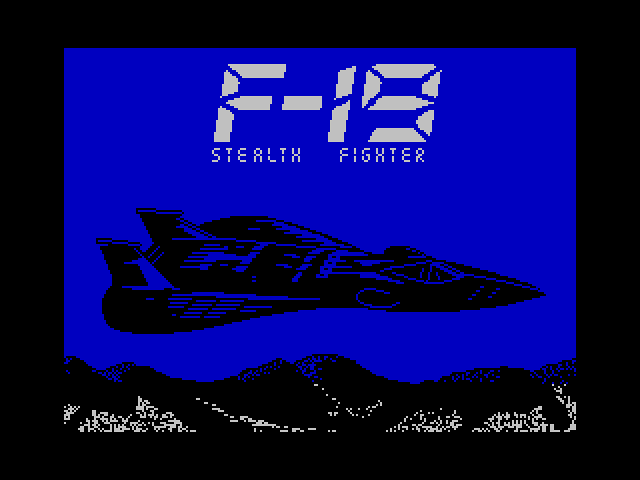 The idea of a "stealth fighter" surely captured the popular imagination in late 1980s. Tom Clancy described it in the novel Red Storm Rising, a low-flying solo pilot in clandestine operation amidst an escalating battlefield. Clancy's books provided synopses for half a dozen Microprose games (including RSR), so no wonder the stealth fighter scenario was made into a game.

As is pointed out in the manual, the stealth mission is a situation where the lone-pilot approach makes some real world sense and this could be translated into a satisfying game. Nobody knew exactly what the Stealth Fighter would be like, but Microprose made some educated guesses and I believe a simulator of a yet-to-be-public plane was a world first. 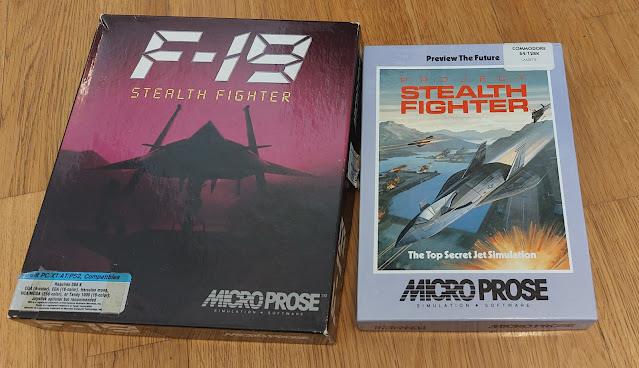 Back in the day, I bought this game on C64 cassette even if I knew it would not work very well. I recall it was disturbing to lose your craft early on and then having to load everything again from tape.

Later, I used an Action Replay cart to store a mission starting point so I could at least practice more.

A ZX Spectrum version existed, something which I had forgotten. Glancing at it, it's a bare-bones version of the game, all the C64 features are probably there but with less graphics and presentation. It's not perceivably faster and I have to confess the Spectrum's colour scheme does not lend itself to the tech-thriller stealth atmosphere so well.

The DOS version of Stealth Fighter is an older generation PC game. My version came in 5'25" floppies and should work on a 8088/CGA PC. The roughly 320 x 100 pixel area reserved for the main view is surprisingly crude, and although there's a world of detail compared to the C64 game, the visuals are not that far from each other from today's perspective.

Some instruments are strangely lacking, there's no accurate numeric readout for your current bearing, for instance. You have to rely on the visual indicator at top.

There's a bunch of functions that can be assigned to the two dashboard monitors. Using the camera becomes quite important when landing, because the ILS is not that good for seeing the precise alignment of your plane in relation to the strip. The Reverse Tactical View can also help getting it right.

For this reason I've felt it better to approach the airfield from about 2000-3000' as you can get a more angled camera view from up there.

The most interesting feature in the game is the radar threat indicator which displays enemy radar signal strength against your craft "stealth" profile. Higher altitude generally means more visibility, and rolling the craft also increases your profile.

If the radar blip bars overlap with your stealth bar, it means they've caught a glimpse of you. One such error is usually not significant, but repeated scans will have the MiGs and SAMs firing missiles at you in no time.

In the geographic map all the radar signals are visualized as expanding circles, and you can navigate your way in or around the sites. Pulse radars can be approached head-on, whereas doppler radars are better dealt tangentially to the signal.
This straightforward logic gives a slightly puzzle-ish feeling to the missions. 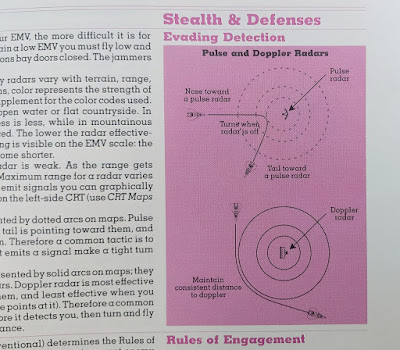 The 8-bit Project: Stealth Fighter only had a simple meter to gauge your stealth level, but little to no information about the radars and their impact on the meter.

Although the 16-bit game might provide unrealistic amount of data to the player, I believe this is for the benefit of the game and the simulation. Microprose did wisely to make more of the battlefield visible instead of limiting the scope strictly to the pilot's seat. You get a sort of sectional view of warfare, which is certainly very instructive and makes for a more interesting game. 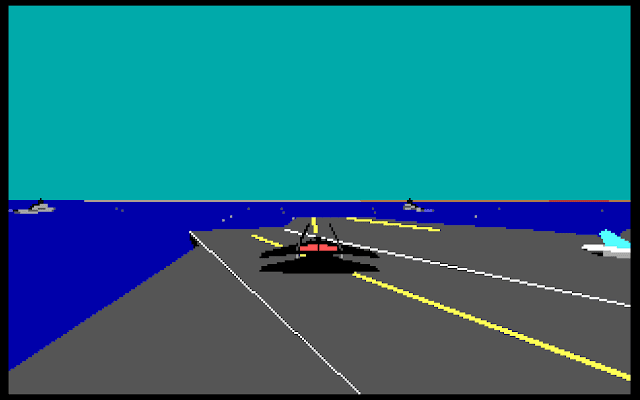 In theory, the "signal map" needs to be negotiated just as the physical space, but at least on lower difficulty levels you can get away by simply flying low and taking note of the more active radar sources.

Flying low you also get to see the landscape and occasionally need to navigate around hills and mountains, something that's usually only seen in helicopter simulators. It seems the mountains do not block the radar waves, which is a pity.

Preparations
Microprose games from earlier era always had very lavish manuals, maps and keyboard overlays replete with technical, procedural and even political information.
Perhaps somehow the actions around these paper materials, floppy discs that had to mechanically inserted into the drive, etc. added to the atmosphere. Not only you were a stealth fighter pilot, you were the military planner, the spy, the researcher, a hacker or whatever. 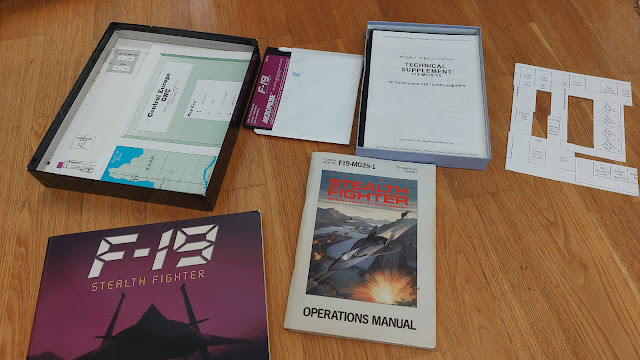 I have lost my 8-bit stealth fighter maps, which is sad, as the black/white maps were more atmospheric. But as there was more detail in the F-19 game, different maps were needed. 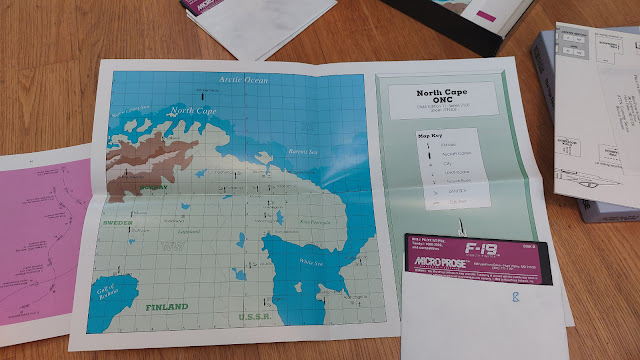 You would almost never really ever see the enemy fighters close-up, so their presence was added by having the pictures and data in the manual.
These were also needed for the copy protection. 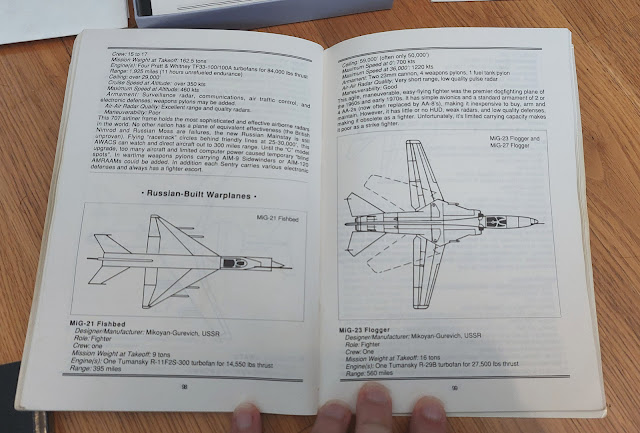 Post-mission
In Microprose-style, the missions are generated instead of "canned" storylines. Therefore they are repetitive with some variety in them.

As the navigation points are inserted to your on-board computer, there isn't that much to do in a mission except follow the navpoints and deal damage. Many choices are still left to you, as the flight path may need adjusting because of mountains, radar sites. It may sometimes make more sense to pick the secondary target first, and so on. 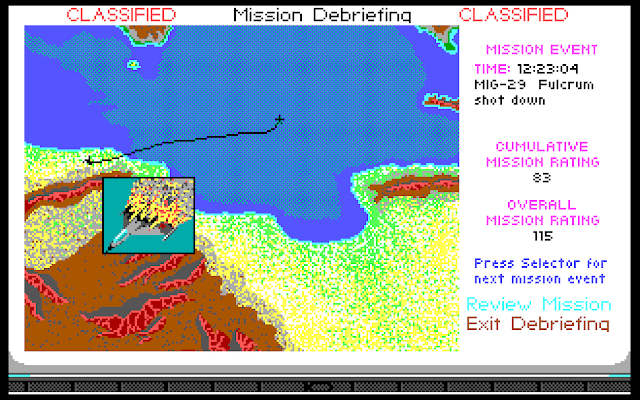 The basic narrative dynamic is created from having a primary and a secondary target. As you destroy the first, the enemy is usually on high alert. Then you have to decide if the secondary target can be achieved.
The spice of the game is often in the situations when something goes wrong. If you miss the target, are the conditions favorable to try again? Running out of fuel you'll be desperate for any friendly airfield other than the designated one. There's a plethora of weapon systems each of which are launched in different ways and suitable for different targets, and just possibly you'd prefer to use something easier than the one suggested.

I always loved how Microprose inserted those amusing images after completing a mission. It seems that to your friends you are only as good as your last mission: