The yearly Vammala Party has become nearly a ritual. It is fortunate that the party could have been arranged during these times. 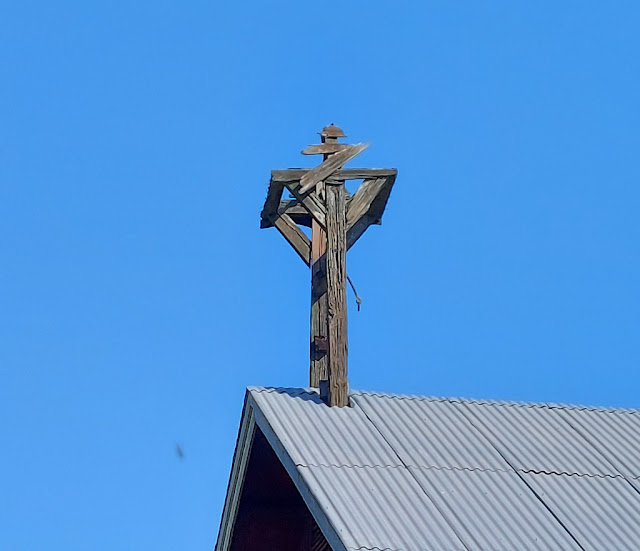 Vammala Party is a 2-3 day event, with emphasis on retro games, tech and demos. Apart from other fun activities there are game competitions and also demoscene compos.
This time I really could not bring myself to do any graphics, not even a PETSCII. But I took part in the demo compo and a couple of other events.
re_monument
This is a demo I made for the Vammala Party 2021 event, called re_monument. 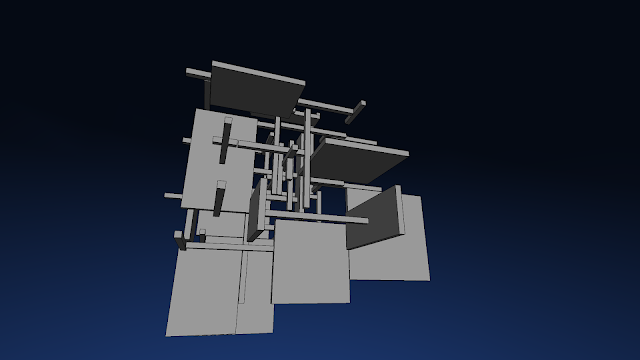 Originally I made it with Javascript, but then found it problematic to auto-play music on a browser (due to some restrictions placed by browsers) so I switched over to Processing.

The program repetitively introduces a set of boxes and moves both them and the camera.

The starting point is always 64 boxes in a 4x4x4 matrix. The sizes are randomized, but only so there are either sticks or flat planes.

The boxes then find their way towards the coordinate center of the universe, but without allowing any of the boxes to overlap.

What then results is a kind of abstract complex shape that occasionally resembles a sculpture and sometimes an interior.

Originally this was it, but to make it into a "demo" I had to limit the time to something that is bearable to watch, add music and preferably synchronize the motion with the music.

To give more variety I created a script to control camera rotation speed, dolly in/out and the speed of convergence (which can also be negative).

The script also controls whether the box configuration is reset or not, so one set of boxes can first "explode" and then come back together.

To add some colour I changed the background, but then felt a gradient would look nice. Adding a large sphere object was the laziest way to do it. Processing happily renders it from the inside too, and adds the directional light shading to it. 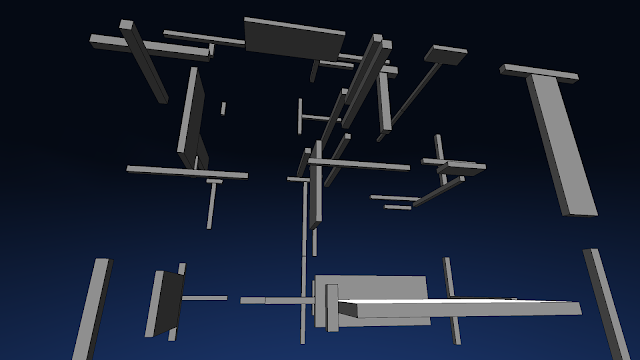 I did experiment with a skybox textured with stars and other patterns, but felt that for my poor eyes the added motion was too much.

From a demo point of view, even more variety could have been helpful. This might have been done even without adding properly new parts, but I kind of liked the single-mindedness of the original concept and didn't want to go too far away from it.

The demo ended up fourth place. The quality of entries was quite high this year and boring/serious things like this don't usually win. Admittedly it does stretch the single "effect" rather thin.

I participated in the Xenocider e-sport event. More precisely, it was the Fantasy Land bonus game included with that game.

The game is a modern homebrew remake of Space Harrier, but recreated with 3D objects on a Sega Dreamcast console.

Each participant played the game twice and the highest score won. And I did win!

In this compo setup, each player was bound to learn from looking at the previous players' efforts. When my turn came I had already memorized a couple of things such as how to deal with the first boss fights.

During play I realized that by destroying as much landscape as possible gives a meagre but constant influx of score, which in turn helps get extra lives. It may be the next players did not get this as fully.

As the Xenocider compo took so long the organizers chose not to arrange the Laguna Racer competition, which was sad as this game was open for practice.

I also participated in the "tuplain" competition where a video and audio are combined to produce a humorous or a thoughtful effect (usually people go for the funniness here).

My combination doesn't make sense for the non-Finnish speaking audiences but here's the link anyway:

I'm thinking it's best if two unfunny elements together produce something hilarious. Here the video (Gloria Estefan's Doctor Beat) is already quite funny by itself, so I would have felt a little bad for winning with it. I did end up second place which is fine.