For some weird reason I had believed the 1084S display cannot be connected to my computers, because it does not have the 21-pin RGB fitted in. Then one day I realised I have an cable that does the job for Amiga.

Then I thought perhaps QL should work with it too, if not with the analog RGB then with the digital. This is something I tried a few years ago, mostly by guessing, but then abandoned it as I couldn't get it to sync.

I then found these instructions which made me rethink the cable.

It turned out I needed to disconnect one wire and reconnect another in my already existing cable.

These are the female connectors at the backside of the 1084S and QL respectively: 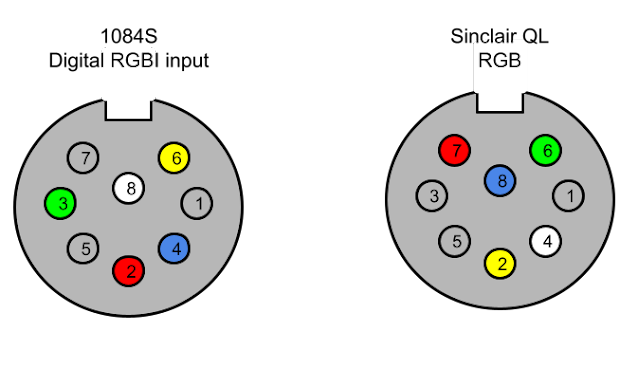 I admit I was somewhat flummoxed when turning my QL on after this long while. But one reason for making this blog is that I can go back to old material and again remember how things work. I don't really understand my boot arrangement anymore, but at least it works. 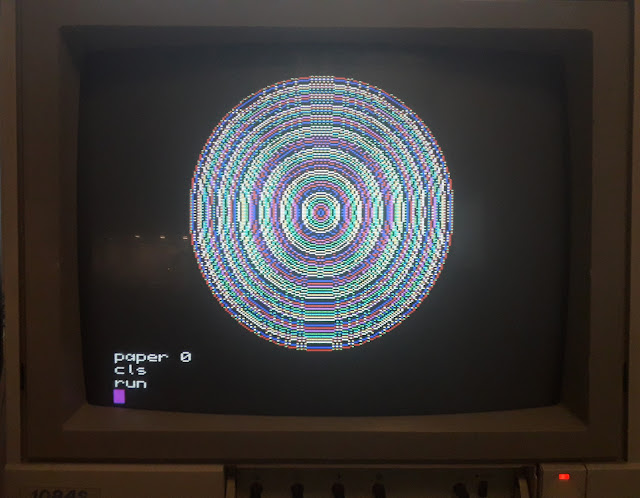 Using a QL keyboard after a long while was not an entirely positive experience. It is far more clunky and noisy than I remembered. The basic sensitivity of the keys is ok.

CTRL+left or right is Backspace and Delete, and this is rather intuitive as the CTRL is really close. Not having to reach further is a benefit after getting used to it. For some kind of tasks this layout can be good, but for games it's not too great.

WTV can be a helpful command if the image does not fit the screen. With the 1084S the screen can be adjusted to fit, though. MODE 0 and MODE 8 switch between the lower and higher resolutions.

Depending on the setup the drive might respond to following commands (mdv is microdrive, flp for floppy drive and so on)