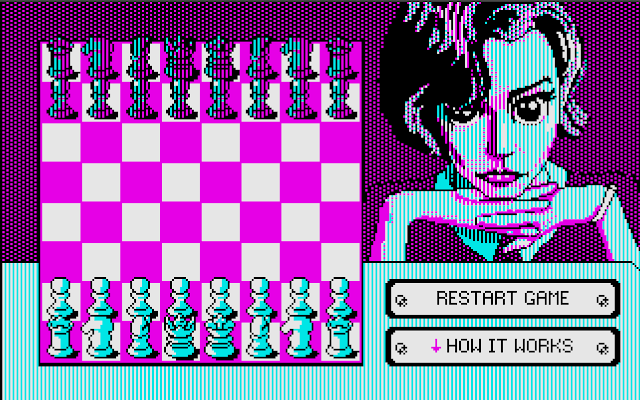 Recently, I've been playing The Kilobyte's Gambit. This is an older Javascript 1K chess engine that has been put together with CGA/MS-DOS -style visuals, referring the series The Queen's Gambit. Here you play against a pixellated caricature of Beth Harmon the chess master from the show.

After winning the first game ever against it, I got emboldened and thought it was a simplistic opponent. However, later games revealed I can hardly guarantee a win and have probably lost more games against it than I've won. True, I try to play fast but even when I play slow and careful a victory is not always secured.

I was also curious if the small engine would reveal its limitations to me.

A low level player like me is pleased when the early game follows some known opening pattern, and then a comfortable middle game follows. Yet, when opening theory is discarded as anarchistically as Beth does here, then I'm faced with a difficulty: What to do when the opponent does a move I know to be "wrong" but I cannot exploit this knowledge in any way?

Beth's approach resembles some of those dreaded "pawn-pushers" at Lichess.org. I try to play normally and soon my defences are overcome with pawns far too close to comfort. Yet I somehow know it's not a good approach.

As much as I hoped for a "silver bullet" solution that would break the computer and win every time, this doesn't seem to be the case.

At some point I tried copying the pawn movements. After creating an near-immobile wall between you and the opponent, the computer gets confused and simply moves pieces back and forth. 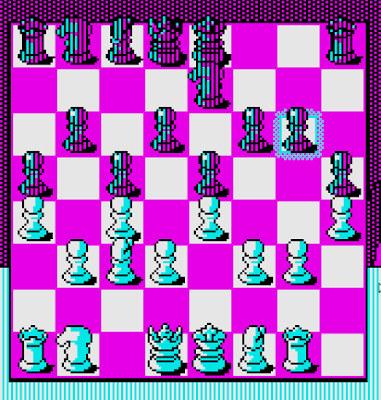 This gives time to pile up your rooks and material to the right edge and push through. After a couple of successes with this approach I begun to be confident that this is it. Yet as the wall is broken you are not always the one to benefit from it! Also, "Beth" may choose an opening where this isn't even really possible.

Still, are there any observations beside "play well and carefully?" One clue is in the instructions: Beth sees four moves ahead. This is enough so it won't fall for a simplest traps or discovered attacks, and unlike a beginner Beth won't be hanging pieces.

The 4-move horizon is broad enough to produce moves that can break a castling and lead to a mate. These can even appear diabolically clever.

Frustratingly, Beth never castles, which seems like another bad practice, but the engine does rather well despite of this. It knows the castling move, though, but as much as I've observed it's only done to avoid a mate.

The non-castling is one piece of knowledge that can be exploited. Checking occasionally provokes the king to move around, if there is no adequate or useful piece for blocking the attack. Furthermore the king may be lured to territory where it can be mated.

(The castling rules appear to be off: You can't castle if the involved rook is under threat, and this is wrong.)

If Beth appears to sacrifice something, be very careful. Often this is just a prelude to a fairly useless exchange, but something worse might happen. One idea I've tried to observe is not to be too responsive to the black moves. If Beth seems eager to exchange a piece, try to come up with something else.

The engine is quite bad with end games with pawn promotions, as it might simply not see that five-six moves ahead the player can have a new queen. This suggests a strategy where the black pawns are reduced and all pieces exchanged. To make this happen is of course easier said than done.

Early in the game, Beth might even "give away" pawns as part of piece exchanges. These are not usually too dangerous to take, but the moves afterward have to be done carefully. 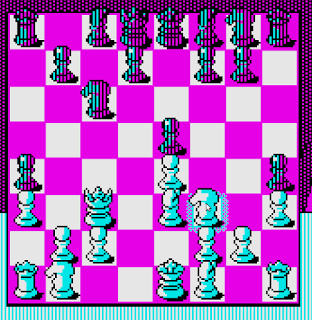 In the above position, the center pawn can be taken with the knight. Black takes knight and then White takes knight with the queen (check). Some threatening situations arise but as the computer doesn't see that far here these could be resolved without loss.

In the same vein there can be opportunities for forks. I cannot really fathom how the engine allows these. I suspect it might see a mate or worse in the near future, something that's not easy for the player to see, and the only way to avoid it is to permit the fork.

Clearing the field of black pawns entirely should not done lightly, as the engine seems to thrive on an open field. I guess as the decision tree becomes broader, a human can't handle it easily but it's no problem for the computer. Semi-closed positions are better as there a person can more easily see ideas beyond the 4-move limit.

I'm wondering whether it's a good idea to concentrate on this game. Does it improve chess skills at all?

I compared the engine to Stockfish levels 1-4 in Lichess, and Level 4 ("1700") was able to win it with certainty, whereas I suspect Level 3 might win it with luck. At this time, it didn't. The thing is the Lichess Stockfish easy levels sometimes do random mistakes and blunders that the 1K engine doesn't do at all.

It's a good idea to have some exercise against "bad" openings too, as there are those non-castling pawn-pushers in online play too. (I've started to suspect some of them are testing their own engines) Many chess engines don't really offer this option.

The graphics are quite unclear, which makes the game somewhat more difficult. Many times I've blundered because I couldn't tell the king and queen apart, especially when the king may move about more than the queen.

When going back to Lichess after an 1K gambit session, the graphics there look blissfully clear and spacious. Possibly, just possibly, this CGA-ordeal helps in reading the board.