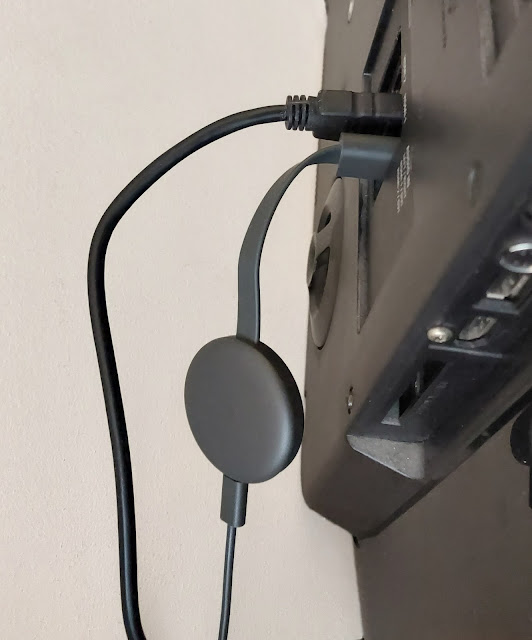 I don't usually get the latest TV/hi-fi tech. On a whim I bought the Jaffa-cake sized Chromecast dongle, stuck it into the ~2008 Philips TV set HDMI port and had a look. After running the Google Home app on my phone I could teach it the home network and then start "casting".

Even now I was mostly interested in seeing if this could cast the Linux desktop, and if it wouldn't, then I'd still have my Android phone for casting videos. Then it became the current TV watching solution.

But about that desktop casting. On Linux Mint 19.3, with Chromium browser I found no problem. I could also mirror the desktop or the browser window. This is very laggy (at least half a second) so it could work for showing slides or photos.

So I quickly learned the casting is really only supposed to be done with the "cast" icon and the desktop/browser casting is just a tiny added extra. Youtube obviously works. Yle Areena, the national streaming service, could cast a film and it looked rather fine. I didn't see any problem arising from the Linux environment here.

Outside the browser, VLC does cast too, but there's a problem with the subtitles and there are apparently no really good solutions to it. The only 100% working approach is "burn the titles prior to watching".

Ever since the TV transmissions turned digital (analog ended in 2007) I've been somewhat disappointed with upgrades and hopping between services, not that I bothered to do that really. The crappy bundle tied with the ISP had kept me somewhat happy, thinking this was the only way to meaningfully watch something on that old TV set.

But now the old me finally saw that channels such as Netflix, HBO, Disney+, Amazon Prime, Ruutu, Yle Areena etc. are also apps in the appstore, tied to a monthly subscription. Probably something like Apple TV+ isn't on a Google service, but otherwise the coverage on the Samsung phone looked quite good.

So I could subscribe to one and pick another when something interesting pops up. But it might also be I'm too lazy to unsubscribe the channels (which is what the companies hope for I guess).

Watching shows is easier than having to fiddle with the digi-receiver which even tended to crash-mid show if it hadn't been rebooted lately. And although I still need the TV remote control, the phone now becomes the remote, too.

Netflix appears to work flawlessly, and casting just the interface itself provides some useful information besides just the logo. Ok, so it might just be an ad for another show, but anyway. HBO Max exactly only shows the service logo on TV screen. With HBO Max I had to find where to adjust the subtitles, and when I got them to work the 'titles were of the somewhat ugly white-on-black box variety.

With HBO Max there might have been a tiny hiccup in the streaming too, something I never saw with the Netflix app. Could be the Max has more bits in the stream by default than the lowly Netflix subscription, however I turned off the phone energy saving and never saw the hiccup again. Occasionally, after viewing a show, the HBO app says it is "offline". Fortunately this did not affect watching the stream in any way.