Zeeclo will tear us apart 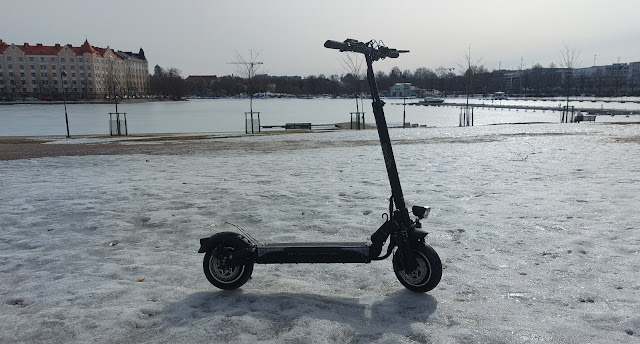 (...or the other way round really, but anyway)

The weather is favorable for some scooting again, even if doesn't look like that from the photo.

But I modded the electric kickbike a little, it's missing a piece in the above image.

I already previously wrote about my intention to remove the wooden deck and replace the grip tape.

This is partly because I felt there's 0.8cm of extra height to an already high deck, and secondly I didn't like it aesthetically.

So here are some notes of this project. After ordering suitable grip tapes (2 just in case!) I could start working. 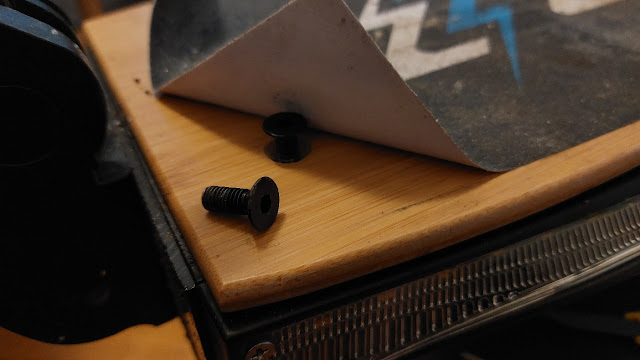 The old grip tape came off quite easily from the corners. Then I removed the bolts with 4M Allen/hex key.

But because the deck wouldn't come off I removed the entire grip tape in case there might be more bolts. This was also very easy to do, so replacing just the tape would have been quite simple.

As a side note it can be seen the surface can get rather dirty easily. 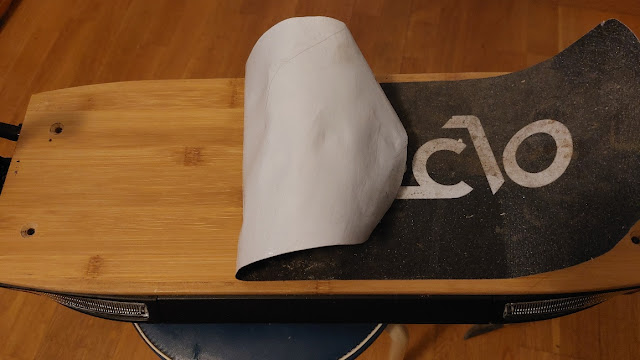 Because I couldn't find any more bolts I deduced the wooden deck has been glued in after all.

I begun pulling out the deck, prying it up from the corners using a strong knife. Sadly I could not be patient enough and the deck was split in half from the middle. Well, it came off easily enough after that!

It would have been better to pull it up from the ends rather than from the corners.

Yet I'm not too disturbed as it has been my intention never to re-attach the wooden deck anyway. 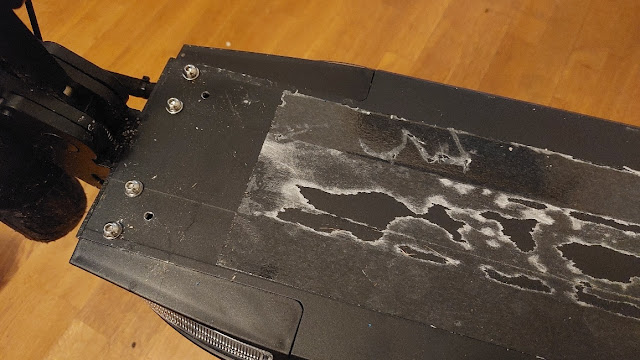 Well, what was then revealed is the real surface of the chassis, metal painted black. The remaining glue needed to be removed, which was the bigger chore here. The excess glue here has a filmic and paper-like quality, and wouldn't budge easily.

I began removing it carefully with a sharp blade, and although this was doable, it turned out to be far too slow. Kicking the glue around with the edge of a wooden block proved to be more useful.

The small amounts of remaining glue could then be removed using acetone, wiping the melting gunk out with a piece of cloth. I really had to lather the surface constantly with acetone to make this work. 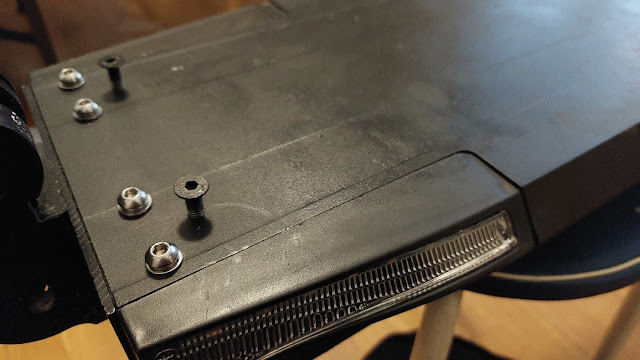 Removing the glue altogether took more than an hour.

Now that I'm looking at the results, I think the wooden deck wasn't there for nothing.

Firstly it is meant to cover all the bolts from moisture and rain, not just the ones used for the deck but the protruding ones at the front and back. It obviously protects the metal surface too.

Secondly the piece also extends the length of the usable deck with a few centimeters, because the bolts are no longer in the way.

Thirdly I guess it gives a nice and even surface for the grip tape.

Interestingly, there are more bolts here at the front than in the comparable T4 (Maxwheel etc.) and the Zeeclo U322 itself, which doesn't have the wooden deck to begin with. 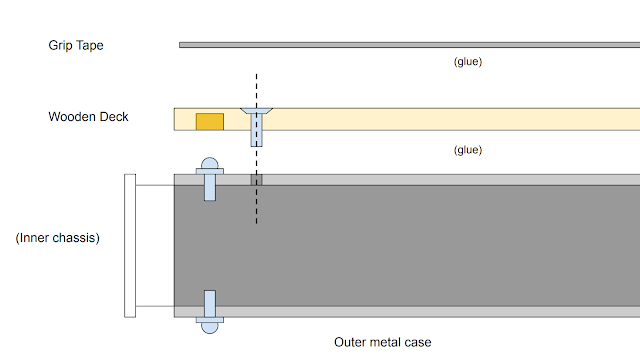 The not-to-scale image above shows some of the parts involved here. The structures holding the front and the real wheel are welded into this inner chassis structure. Here the "inner chassis" has been imagined as somewhat pulled out from the outer case.

I became curious about the metal cover. It appears that the "wings" are also part of the cover and not removable plastic additions such as the lights at each corner.

I had a notion that the cover and the wings could be removed, but now I realised the metal case is a kind of outer "pipe" to which the inner structure is apparently slid into. 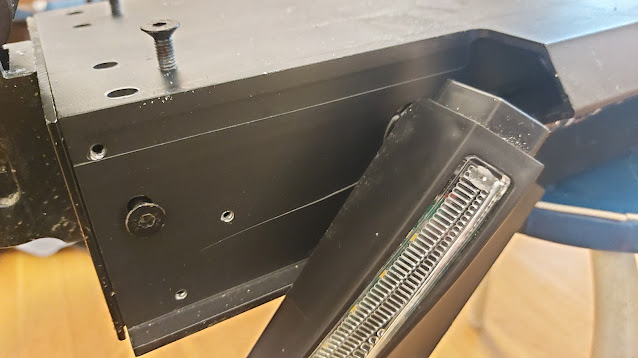 It might be interesting to try to dismantle the whole thing, if it's even possible. As it appears it is not all welded shut, it ought to be doable.

However, as I understand it, removing the outer case would result in something that doesn't stay in shape, so I'm not too keen to do that now.

The surface isn't exactly even, as there are two inclinations, possibly for the grip tape strips that are seen in other scooters. For the grip alone this might be enough here, but I had to take into account protecting the metal surface in the middle. Sand particles under my boots would easily scrape the surface. 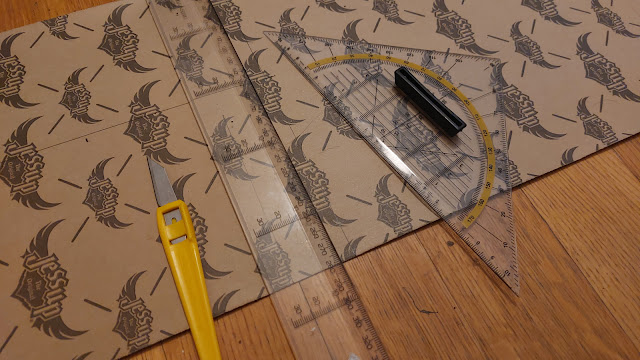 I measured the free area and cut a precise 490x129mm piece of the tape.

With a skateboard, you'd position the tape over the deck, process and cut the remainder. Here the piece was smaller, and positioning it exactly was the hardest part. After that there isn't anything to it, just patted it some. 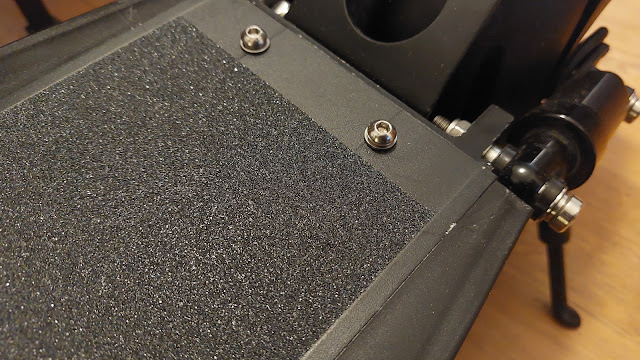 For now I took the lazy option and did not fill the additional bolt holes (the ones holding the wooden deck in place) but simply covered them with the grip tape. I can see myself doing this better at some later time.

For example this piece does not prevent the rest of the surface from getting damaged, like the wooden deck would have done. Later, the piece might be roughly shaped like a plus sign. But the main point here is to test the grip quality. 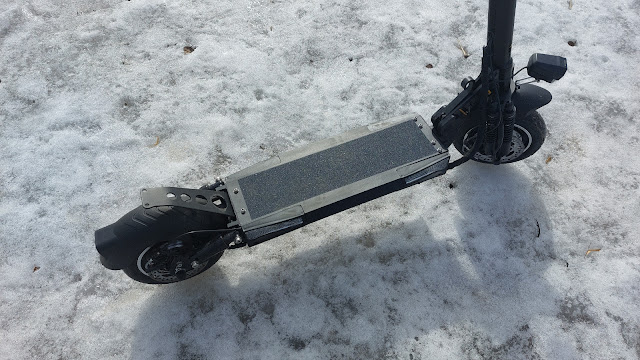 All in all, although I understand the protective idea of the wooden deck, this looks better to me and does not seem to compromise grip quality. And it is 8mm lower!

I drove about 10km and didn't feel there was anything wrong with it, my feet fit on the deck just as well as before really. The unprotected parts did become somewhat dirty though, the paint surface will probably be scratched through eventually. 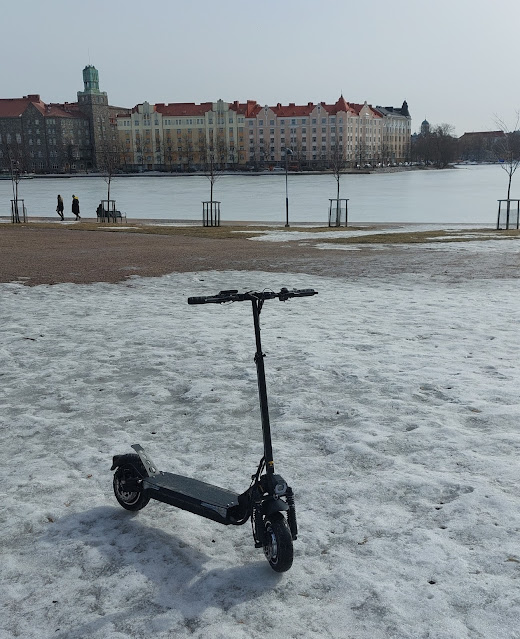