I am not a huge fan of wireless keyboards, but for this "TV controller" I made an exception, especially as it is a combination of keyboard and a trackpad. With this I can access a Linux computer connected to a TV at the other side of the room.

In the past, I have looked at various phone-sized micro-keyboard solutions but it's perhaps good I did not take that route. I need to type in terminal commands or even edit configuration files, which would be too painful with tiny keys.

The not-too-powerful Fujitsu Esprimo Q510 works as the video source, running Ubuntu Linux. When I plugged in the USB dongle, the computer responded to it immediately, no problems. 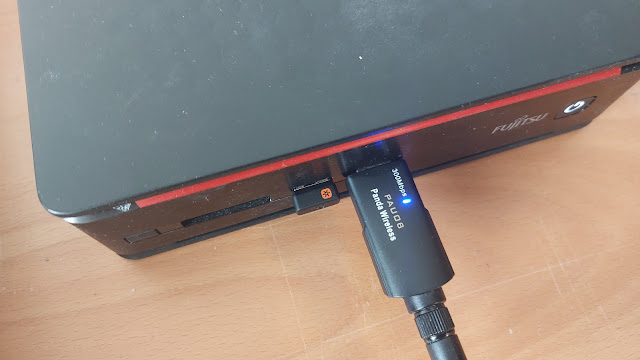 The lightness of the keyboard case is here a bonus but understandably it is also somewhat plasticky.

The feel of the keyboard itself is adequate, which likely means I'll get used to it. The styling gives an appearance of flat keys, but they are really not that flat. The key travel distance is larger than for example in the Apple keyboards. The keys are quite silent compared to the mechanical keyboards I have been using lately.

The compact cursor key cluster is not ideal for these kind of keys. It's also possible to accidentally move your hand over to the trackpad when typing at the right hand side.

The mute and volume keys worked as expected.

There is a mysterious yellow key at the top left corner. I hoped it might switch the trackpad on/off, but it is really just the left mousebutton. This seems unnecessary as the trackpad has buttons, but it can be useful if I hold the keyboard in both hands and try to do something with the mouse. 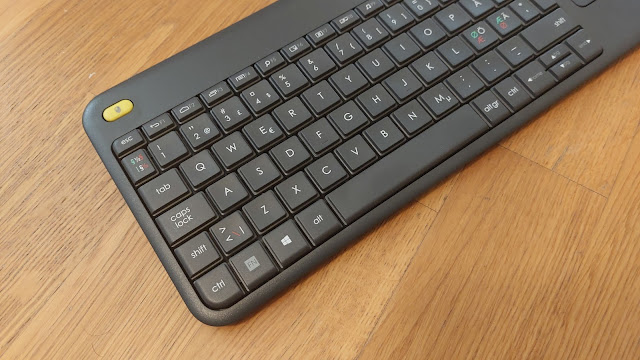 There's a power switch too, hopefully it helps save batteries. The manual promised 18 months of battery time, I'll have to check on that promise.

I did encounter some hiccups with the key transmission, likely because there were obstacles between the keyboard and the USB. I need to continue using the keyboard to see if it really happens again.

For what it's worth, I switched the USB transceiver to a different port as it was "behind" the wlan interface in relation to the sofa. I think it would be better to place the USB wlan to the other side entirely.

This keyboard looks like a good solution for the TV. When I have used it more, I can comment something about using the screen from distance. Only after zooming the terminal window, I could really see what I'm typing from across the room. 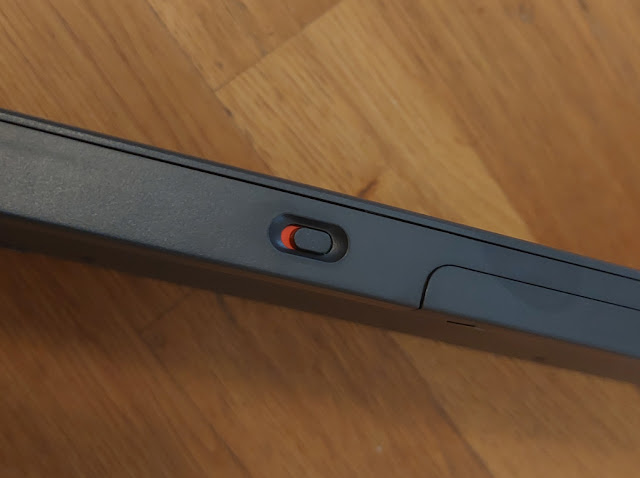