Finally, I got to watch all Rambo films.

We meet John Rambo, a Vietnam veteran whose best buddies died in the war and now he finds out the last one of them has died too.

While still dressed in that reunion garb, trying to get into a town he gets harassed by a local sheriff. He gets PTSD in the cell, kicks everyone's ass, leaves the station, steals a motorbike and drives to the hills and to the realms of legend.

I liked the detail when the sheriff's car turns over, Rambo actually seems concerned if something bad happened. As he sees the sheriff crawl out of the wreck, he leaves.

Rambo tries very hard not to kill anyone and even the sheriff has some sympathy towards him, it just turns out everyone else is a trigger-happy gun-nut. Things escalate and soon the sheriff has a small war in his hands.

The general consensus is that this is a film with actual merit, and I've tended to agree. Well, I've always thought the Trautman character to be a bit silly.

Rambo lays traps in inhuman speed. All the sheriff's henchmen are clowns eager to join the fight despite having already seen what Rambo can do. Yes, some have worries about this but dutifylly they go on.

Rambo has been in the prison labour camp for five years. Trautman makes a deal that if Rambo does this mission he can have his freedom.

As Rambo later explains to a POW, it is 1985. Taken very literally, the events in First Blood would take place at 1980.

Some have ridiculed the lightning fast relationship of Co Bao and Rambo. But what isn't obvious is that the mission takes several days (as it gets botched) so perhaps these warrior souls could relate to each others quickly.

Of course after they reveal their feelings it doesn't take a minute until something bad happens. I recall MAD Magazine making a joke about that lucky charm pendant perhaps being not so lucky after all.

This film established "Rambo" as a shorthand for American jingoism, but this isn't fully deserved. The film does have critical tones towards the establishment and derives some tensions from the post-Watergate conspiracy and paranoia themes.

The computers at the base seem a bit old-fashioned for a high-end operation in 1985. The strange anti-technology vibe in the film is inexplicable. But it must be remembered, a "computer" picked up Rambo as the person most likely to survive this mission, so Rambo has some resentment towards the bureaucratic "machine" overall and the technology that made him do it.

Likely the computers were networked so all the data was safe, though!

The film is actually quite coherent and enjoyable, maybe inexplicably a better film than it should be, and a canonic part of 80s nostalgia.

This is a really big money film. Rambo is in Thailand, participating in an (illegal?) martial arts scheme and helping some monks. Later we see him in Afghanistan in an attempt to rescue Trautman.

A lot of effort has been put into presenting and respecting local cultures but this tends to be exoticist and orientalist. Also, the russians are characterized as brutal and inhuman.

One gets the idea this was to take Rambo more in the direction of Bond or Indiana Jones films, suggesting a series of films in the rambo format. And it kind of works, except the latter half of the film simply repeats the kind of action scenes already seen in Rambo II, only made bigger and even less credible.

Trautman's character is taken to strange extremes, suddenly he is quite a 'rambo' himself, despite having been tortured by the russians for a while.

Surely the 1990s should have had a Rambo film or two, but the times had changed drastically. Perhaps the Gulf war again made war a reality so a rambo-flick might have been somewhat tasteless. Films like Hot Shots! Part Deux were already making fun of the genre.

At the time of the release of John Rambo, it felt surprising a Rambo made in 2000s could be as good. It didn't add that much to the Rambo mythos, though. Now that I've viewed it so quickly after the 1980s trilogy, it feels even less necessary. 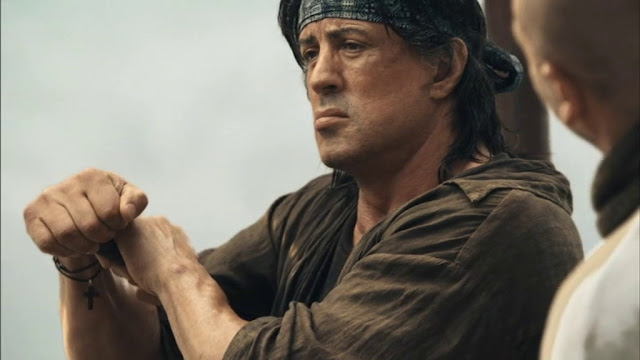 I like the rawness of the images, and the return to somewhat more "primitive" film-making. The roughness of the environment and the brutal violence is a contrast compared to the more comic-book antics in Rambo III.

It's a nice idea to start asking what Rambo is and how he could get his redemption, or come "full circle". It's just that this idea does not progress much here.

The bad-ass mercenaries are a nice touch, Rambo can concentrate on being quiet and the gang brings some added color to the film. Their internal dynamics is sometimes cleverly made apparent by visual storytelling, but they don't really have much of a story to tell.

Unfortunately, the poor treatment of women as some kind of story/shock element is annoying and tends to bring this film down. Perhaps this is ultimately what makes this film less appealing to me than Rambo III.

Rambo lives near Mexican border at the farm we saw at the end of the last film. Ten years have passed and Rambo has apparently both helped solve some problems there and found some peace for himself. Ok, so he does dig these weird vietcong-style tunnels under the farm, keeps an unnerving amount of Vietnam memorabilia, and takes meds.

Rambo's sort-of grand-daughter goes to Mexico to see his biological father, despite stern warnings from John. Turns out the dad doesn't truly give a shit. By way of deception the girl is captured by criminals specialising in human trafficking and prostitution.

As Rambo goes there somewhat unprepared, the gangsters are able to, well, gang up on him and beat him to pulp. As he recovers with the aid of a journalist, crucial time has been lost.

Rambo is somewhat too old to be an action-hero, but when the violence really starts some thought has gone into figuring how he could still do it. This is done adequately, although I was hoping more of outdoor environments and perhaps even horseback fighting.

Trump's wall notwithstanding, criminals, drugs and guns move to-and-fro between the Mexican border. Again the henchmen are quite loyal. The fiery explosion that blows up a car should have given the gang a pause. Also, why are they so certain Rambo is alone on the farm in the first place?

I felt the film was tonally bit off at places. From Rambo II onwards John Rambo specialized in rescue missions and so it is here too. But, "Rambo goes to Mexico to rescue an innocent girl" is perhaps not the best premise. Why, after all of the shit Rambo had to bear, something nasty had to happen once more. Crucially, this time it is completely unrelated to his military life and perhaps this is what makes it feel random to me.

When discussing Rambo IV, I suggested the nasty treatment of women worked as a poor shortcut to showing how "evil" bad guys are. As human trafficking is a very real thing I suppose it is more appropriate here and it is not dwelled on too much or in a wrong way.

Whether Rambo dies here is open to some interpretation. But either way I hoped he could achieve something more than disposing an arm of a Mexican gang.

I'd thought there would be more to learn and say about Rambo after watching all the films in relatively short time. But after Rambo III we don't get to know much more about Rambo's past or his persona. Last Blood kind of shows what came of him, but other than that not much is added to his story.

John Rambo ascended towards the film three, each time facing a bigger war. Then the scale of action becomes again smaller in IV and the latest film looks at a skirmish comparable to the first film.

There are Rambo books too, in fact the character made his first appearance in David Morrell's book from 1972. I've only read that one years ago and I am unable to compare it to the film here.

There's also more Rambo material. Such as the animation series. And I've yet to see Syndicate Sadists with Tomas Milian from 1975, technically the first Rambo film. Perhaps some other time!