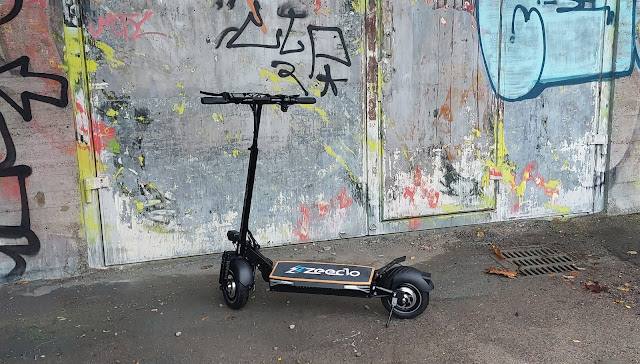 So I went and bought a Zeeclo Fenix Dual e-scooter, also known as U322.

My previous experiences are based on driving the Voi Voiager 3X rental scooter for a couple of months. Ultimately the itch to have my own got the best of me.

I did an uncharacteristic amount of searching and comparison of features, compiling them into a spreadsheet, and even watched Youtube video reviews.

First I didn't know what factors to choose, starting from price, range, top speed, weight and wheel size. I realized only later that deck size, clearance and wheel type might matter. Or that power could be discussed in terms of V/mAh and not just wattage.

The Voi rental scooters set the bar quite high. I felt I wouldn't want less than ~10" wheels, and all the smaller scooters looked too feeble anyway. So scratch Ninebot E45E, E22 and the like. Scratch everything that can't make 25km/h. In fact, if it can go bit more on paper, the better, because then the scooter can likely do the actual 25km/h.

The final choice was between a Segway Ninebot Max G30LE (G30LP) and the Zeeclo Fenix with dual motors. The Ninebot would have been cheaper and a rational choice for a first scooter: a well known make, a clear design iteration, probably more sophisticated battery, better water resistance and some anti-theft measures.

Comparing numbers was a valuable process, but ultimately I made the choice based more on feeling than justifying features through price. The Fenix looks more interesting and is probably more powerful.

What confused me is that Zeeclo Fenix looks outwardly quite similar to many models, such as Smartgyro Speedway/Rockway. At Aliexpress I could find a very similar MaxWheel T4 MAX 600W that's also much, much cheaper with many similar parts.

The Manfirth site on UK, sellers of MaxWheel T4, says "We also now have the T4 Max DUAL electric scooter available c[o]urtesy of Zeeclo." So again I'm not sure what all this means, likely that the normal T4 is not as powerful.

The similar appearance doesn't mean they are the same scooter. For example, the Smartgyros are more expensive and have more powerful engines and batteries. (Likely too powerful for the local law here). I'm simply hoping the price was reasonable for the dual motors.

So, what about this "patinete?"

Firstly, I'm not sure if the two 500W motors make it comparable with a 1000W single-motor scooter, but there they are.

The whole scooter is somewhat larger than I expected, a tiny bit longer than the Voi, 122cm from the tip of the rear fender to the front wheel. Weighing at about 28kg, which is a horrible amount to carry in stairs. Also forget about popping inside a store and casually carrying the scooter in one hand.

Despite having large ground clearance and very visible shock absorbers, it is not marketed as an off-road scooter. The Ninebots might have better water resistance.

The deck size is 54 by 19.5 centimeters. The entire block is 23 centimeters wide. The deck is slightly more elevated than in many scooters at ~22cm. The wheels looked like ~25cm size.

The deck is covered with what appears to be sandpaper(!) but it gives a good grip. The edges look like they are wooden. The huge logo on the deck is not that pleasant and I could think of covering or replacing it in the future, sorry. The logo on the stem is more stylish.

There's a normal-looking LED headlight, small taillight and large-ish indicator lights at the front and back of the deck sides. I've understood the indicator lights are not very visible during daylight, and there are no lights at the top of the handlebar. There's also a co(s)mic LED ribbon light around the deck, which can illuminate the ground at night. To my surprise these ribbons were quite loosely fit.

At places the build quality is very robust but in details there are some rough choices. The brake wires and electric wires are very visible all around, and are kept in place with zip ties. I also found myself adjusting and tightening many rubber and plastic parts after taking the Zeeclo out of the box.

The upside of this might be the parts are then more visible for repairs and adjustments. Many of the parts look like you can buy them from Aliexpress or something, such as the Focan S866 generic E-bike display. So the Fenix may be less black-boxed than for example a Ninebot/Xiaomi.

I gave a little kick and went on. Not much power, so let's put on the third "gear". My very first emotion was of horror mixed with disappointment—the acceleration felt feeble and the smallest climb looked like a problem.

Then I turned on the second motor and all was fine, it's really brisk and powerful. Every small hill I've climbed with the Voi was easily conquered with the Fenix dual motors. It's silent, too.

The slowish acceleration with single motor is not a big problem, but I had to learn to anticipate stops and starts differently in actual traffic.

Switching the 2nd motor on and off during driving adds some complexity to the task, especially when the display has no indicator about the dual motor status. I tried to keep from using the 2nd motor constantly, as I believe it is a battery-eater.

I drove from Vallila to the Helsinki City centre, using the bikeway next to the railroad track, probably the best place for test driving (and photos). There are peaceful long straights and also some short but steep hills. It's also a typical trip I've done a few times with the Voi. The weather was near-raining, so I didn't dare go further.

The Fenix has an automatic "cruise control" that maintains the speed. At times this got stuck to 20 or under, and the system had to be shaken out of it to get to 25 km/h. This takes some time to get accustomed to. The cruise control reacts naturally to braking so no problem there.

The dual motor drive is powerful and responds almost too aggressively to the thumb throttle. Starting from stand-still it can give quite a kick and throw dirt, I'd perhaps prefer only use it to boost the hill climbs.

The hugely visible suspension didn't do much in the urban context, the pneumatic wheels are more important for the overall experience. The pneumatic wheels are so smooth they actually felt a little "flabby" when compared to the Voi hardness. I tried the scooter on a cobblestone-like surface and it's certainly more bearable than with the hard tires.

The pneumatic tires means that they could go flat. I was worried about driving on piles of wet fallen leaves, because I can't really see if there are dangerous items under.

The first push towards scooter ownership came from the speed reduction of the Voi rentals (from 25 to 20). Now, the extra speed meant surprisingly little, and I nearly forgot to write about it. The difference wasn't that huge after all. Or: it's easier to notice a cut in speed than a small increase.

Much like with a bicycle, everything at the handlebar can be adjusted. Wrenches are included.

I rotated the light/dual/horn switch block to make the 2nd motor switch more accessible. This also helps the handlebar to fold into smaller space as the block is not in the way.

The DUAL button is quite small given how often it is needed. Only afterwards I saw it is an on/off switch with a click, but driving with gloves on I didn't really get that.

At least out of the box (after recharge) my feel was positive. Time will tell how durable the battery and the wheels are.

The stem and handlebar do feel somewhat light in comparison, but the ride is still smooth. The scooter is collapsible, and the main hinge is a great piece of work. The joint doesn't move or shake at all during driving, and the folding is very easy to do. Sand can get in there, though.

I suspect the battery does not give much range despite the weight. Already after 10 km (odometer insists 8), the battery had gone down a few notches. After driving 5 km more the indicator was on the last notch.  However the voltage was still at 37, which according to one chart I downloaded should mean there's still lot to go.

I'll try to verify the range issue later, which may be tricky as one is not supposed to drain the battery fully! I have no idea how the battery indicator is scaled, the manual might have more information about it.

Optimistically, the range might be about 20 km for a person of 80kg weight. What I've read about scooter ranges, it's not uncommon to have 50% of the advertised range, so the 35 kilometers here probably translates to less than 20.

I won't give up driving rentals because they are more functional for going to many places, but I hope to continue with the Fenix before the weather becomes unbearable. I guess I'll need a helmet, too.

Google translate does an ok job with the warnings at page 16, so I'll just replicate it here:

Under no circumstances allow the battery to discharge completely as you run the risk of permanent damage.

Warning: Before using the electric scooter for the first time, the battery must be fully charged - eight hours. Failure to do so will risk permanently damaging the battery and voiding the warranty.

NOTE: In case of not using the scooter periodically, it is recommended to charge it monthly. Failure to do so will risk permanently damaging the battery.

Charging first time, I've got to say the charger light was green already after few hours. What can I do but to follow the instructions. The instructions also say that the following charges should be 6 hours.